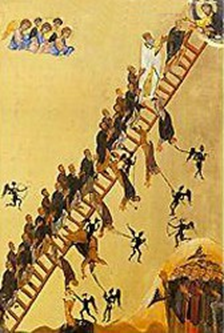 I had the honor of speaking to our Lay Cistercians via Zoom this morning. We are blest to have them associated with our Monastery.

1 There are clearly four kinds of monks.

2 First, there are the cenobites,that is to say, those who belong to a monastery, where they serve under a rule and an abbot.

3 Second, there are the anchorites or hermits, who have come through the test of living in a monastery for a long time, and have passed beyond the first fervor of monastic life.

4 Thanks to the help and guidance of many, they are now trained to fight against the devil.

5 They have built up their strength and go from the battle line in the ranks of their brothers to the single combat of the desert. Self-reliant now, without the support of another, they are ready with God’s help to grapple single-handed with the vices of body and mind.

6 Third, there are the sarabaites, the most detestable kind of monks, who with no experience to guide them, no rule to try them as gold is tried in a furnace (Prov 27:21), have a character as soft as lead.

7 Still loyal to the world by their actions, they clearly lie to God by their tonsure.

8 Two or three together, or even alone, without a shepherd, they pen themselves up in their own sheepfolds, not the Lord’s. Their law is what they like to do, whatever strikes their fancy.

9 Anything they believe in and choose, they call holy; anything they dislike, they consider forbidden

10 Fourth and finally, there are the monks called gyrovagues, who spend their entire lives drifting from region to region, staying as guests for three or four days in different monasteries.

11 Always on the move, they never settle down, and are slaves to their own wills and gross appetites. In every way they are worse than the sarabaites. (Rule of St. Benedict)

I believe the main cause of inner frustration, unhappiness, and anger, in the Spiritual life, can be summed up in the last two types of monks. I suppose that most of us can find a bit of each group in us, the problem is when we allow the ‘gyovagues’ and the ‘sarabates’ aspect of our sinful nature to arise to ascendance. It leads to a life of avoidance and inner dissolution. It leads to an ever-narrowing life and becomes a habit that can be almost impossible to break. It is rooted in fear of disclosure. If one is not focused on one’s inner life, then it is others that are focused upon and judged.

There is also the fear of the pain that comes from facing oneself, taking responsibility for failure, and the fear of the inner emptiness, boredom, and even absurdity that must be faced if one is to grow in one’s relationship with God.

The three most important virtues are humility, humility, and humility. Bernard of Clairvaux

Humility may be the only cure for such an affiliation. The ability to embrace self-knowledge without the shattering of a weak ego. Humility leads to the revelation that the one responsible is the one asking the question. To blame others, the abbot, the brothers, or the liturgy, the list can go on and on, is simply an avoidance strategy that does not work.

Of course, the four types of monks found in Monasteries can also be found anywhere in the world, in any vocation, or profession. In marriage, the workplace, among family and friends is a fertile field to grow in self-knowledge, and the freedom it can give so that one is not controlled by the actions of others or even circumstances. Yes, it is of course a struggle, but that is where growth happens, for it is in our inner conflict that we learn we have the freedom to choose, we are not victims. Humility allows us to know when we fail without being overly concerned, and begin again, and again, if necessary.-Br.MD