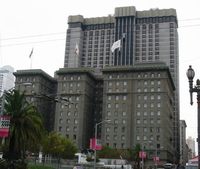 The Westin St. Francis Hotel is located at 335 Powell Street in San Francisco and the Sir Francis Drake Hotel is located at 450 Powell Street in San Francisco. It almost seems that these two hotels, which are on the same street, compete with each other on which one is most haunted.  When I was attending Oceana High School in Pacifica as a teenager, I would drive my 65 Dodge Coronet Station Wagon or my 64 Chevy Impala to San Francisco constantly and of course, I would have my high school friends in the car.  One of the places we would stop to party is the Westin St. Francis Hotel. My high school friends would always rent out a room or even two rooms, so they could celebrate someone's birthday, or celebrate if our high school won a football game.  When I was in high school, I didn't really pay attention to the ghost stories in regard to the Westin St. Francis Hotel.  The night I did pay attention is when I was attending a party at the Westin St. Francis Hotel and one of the high school girls ran down the hallway screaming, claiming she saw a ghostly face in the hotel window. The ghostly face was of a man.  When this girl told her story, the other high school kids laughed at her.  I believe she definitely saw something, she genuinely seemed scared. 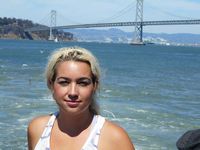 The next time I visited the Westin St. Francis Hotel and the Sir Francis Hotel is when I attended the Haunted San Francisco Ghost Tour. I learned all about the sordid stories of these hotels.  Now in the present time, I received a call on the paranormal hotline from Revy Lancaster of Chicago, Illinois. Revy says that he stayed at the Westin St. Francis Hotel with his wife, and they stayed in one of the reputed haunted rooms.  Room 1219.  Revy claims that while staying in that room with his wife, they heard a female gasping for air and saying..."Fatty, no!"  When Revy told me that story, I immediately perked up with my paranormal antenna fully extended.  Room 1219 was one of the rooms that Roscoe "Fatty" Arbuckle - film star & comedian reserved for his party in 1921. At this party aspiring actress and party girl Virginia Rappe was supposedly raped by Fatty Arbuckle.  Virginia eventually bled to death.  Also, in this same room on a different night, Al Jolson - actor/singer was playing cards and died.  Room 1219 is one of the most haunted rooms in this hotel. Westin St. Francis Hotel had many political & entertainment notables staying at this hotel. In fact, would-be assassin Sarah Jane Moore fired 2 shots at President Gerald Ford at this hotel.  Deanna Jaxine Stinson, Psychic Medium and I, decided to pay a visit to the Westin St. Francis Hotel and the Sir Francis Drake Hotel.  While at the Westin St. Francis Hotel, Deanna picked up on a fat man doing a little shuffle dance and holding what appeared to be a chunk of ice. I believe Deanna picked up on Fatty Arbuckle. I did not obtain any EVPs and did not witness anything I would consider as paranormal.  Deanna being a psychic medium picks up on spirit activity quickly.  Many guests at this hotel have terrible nightmares and a couple of guests have seen the ghostly image of Virginia Rappe pulling her hair out.  Another thing that Deanna picked up on was the image of an elderly lady ghost wandering the hallway. Deanna says that she felt this ghost was harmless. 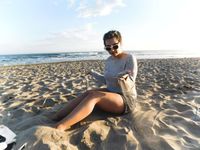 When Deanna and I, left the St. Francis, we had one more stop.  We had to visit the Sir Francis Drake Hotel.  Some of you may be asking.."did you get a room?"  The answer is no.  With Deanna roaming the hallways, I feel confident that if there is something there, Deanna will pick up on it.  Now to the Sir Francis Drake Hotel.  When we arrived at the Sir Francis Drake Hotel, we did our "paranormal sweep".  Basically, roaming the hallways.  According to past reports, a woman guest at this hotel had her hair pulled and thrown to the bathroom floor in her room.  If that story is true, that is pretty intense.  I learned that a previous owner of this hotel committed suicide in the Starlight Room on the 21st Floor.  Many guests have claimed to have seen his ghost roaming the hallways.  Another unusual item about this story is that the elevator will skip the 21st floor. This issue with the elevator has happened many times, frustrating many guests. Another legendary story is that a woman with her divorce attorney met up with her estranged husband in the lobby of this hotel. The husband was very upset to see the divorce attorney and pulled out a gun and shot his wife and then shot himself, a murder suicide in the lobby of this hotel.  They say that Room 823 of this hotel is very haunted. When Deanna walked past this room, she picked up on a woman with a disfigured face, that stared back at her and then vanished.  I attempted to get some EVPs and was unsuccessful.  Some of my photos at both hotels show "orbs", but orbs can be almost anything.  Nevertheless, it was a very interesting investigation and it's always fun to head out to San Francisco.