How did the chupacabra change from, 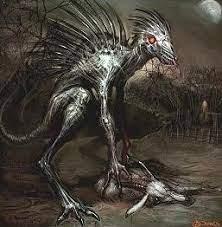 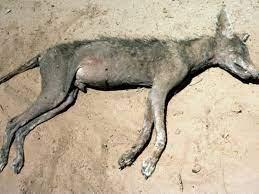 A five-year investigation by Benjamin Radford, documented in his 2011 book Tracking the Chupacabra, concluded that the description given by the original eyewitness in Puerto Rico, Madelyne Tolentino, was based on the creature Sil in the 1995 science-fiction horror film Species.[1] The alien creature Sil is nearly identical to Tolentino's chupacabra eyewitness account and she had seen the movie before her report: "It was a creature that looked like the chupacabra, with spines on its back and all... The resemblance to the chupacabra was really impressive", Tolentino reported.[10] Radford revealed that Tolentino "believed that the creatures and events she saw in Species were happening in reality in Puerto Rico at the time", and therefore concludes that "the most important chupacabra description cannot be trusted".[1] This, Radford believes, seriously undermines the credibility of the chupacabra as a real animal.[11]

In addition, the reports of blood-sucking by the chupacabra were never confirmed by a necropsy,[1] the only way to conclude that the animal was drained of blood. Dr. David Morales, a Puerto Rican veterinarian with the Department of Agriculture, analyzed 300 reported victims of the chupacabra and found that they had not been bled dry.[1]

Radford divided the chupacabra reports into two categories: the reports from Puerto Rico and Latin America, where animals were attacked and it is supposed their blood was extracted; and the reports in the United States of mammals, mostly dogs and coyoteswith mange, that people call "chupacabra" due to their unusual appearance.[12]

In late October 2010, University of Michigan biologist Barry O'Connor concluded that all the chupacabra reports in the United States were simply coyotes infected with the parasite Sarcoptes scabiei, whose symptoms would explain most of the features of the chupacabra: they would be left with little fur, thickened skin, and a rank odor. O'Connor theorized that the attacks on goats occurred "because these animals are greatly weakened, [so] they're going to have a hard time hunting. So they may be forced into attacking livestock because it's easier than running down a rabbit or a deer."[13]

Although several witnesses came to the conclusion that the attacks could not be the work of dogs or coyotes because they had not eaten the victim, this conclusion is incorrect.[1] Both dogs and coyotes can kill and not consume the prey, either because they are inexperienced, or due to injury or difficulty in killing the prey.[1][14] The prey can survive the attack and die afterwards from internal bleeding or circulatory shock.[1][14] The presence of two holes in the neck, corresponding with the canine teeth, are to be expected since this is the only way that most land carnivores have to catch their prey.[1]

There are reports of stray Mexican hairless dogs being mistaken for chupacabras.

I just find it to be quite interesting that the creature looks so different depending on the region. Nessie and Champ are two cryptids in different parts of the world (Scotland and the US) yet with the exception of perhaps coloring they both are physically similar in size and appearance. Why so different for the goat sucker I wonder