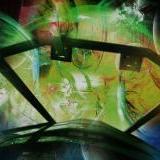 Discussing the logistics of space colonization...

30 posts in this topic