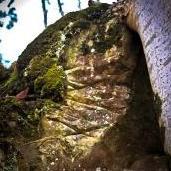 The Lost Tribe of Clover Hollow

The oldest civilization in the world discovered in the Appalachian Mountains?

By BlueHeron, March 4, 2017 in Ancient Mysteries and Alternative History