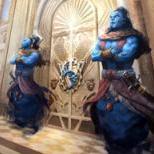 By Summoner, May 4, 2018 in Paranormal Books, Authors and Publications