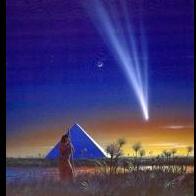 A possible method of measuring in Ancient Egypt