Hell is a Parable for the Womb and Reincarnation

Christians have been fooled into believing the lie of 'Infinite Torments' 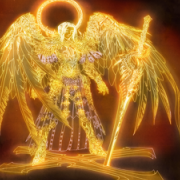 By Base12,
April 29 in Spirituality, Religion and Beliefs