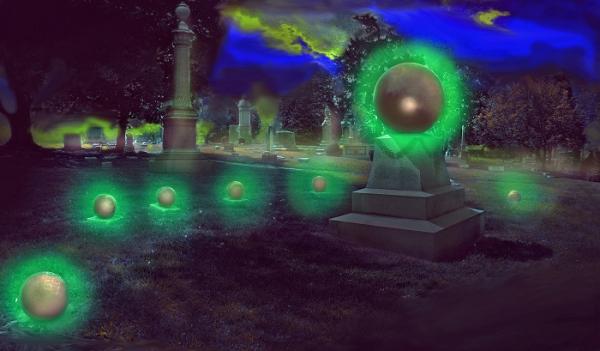 
Uploader comment: This is a Photoshop fancy thing. I have another image coming shortly that is just the ball - no special effects. For generations, Merchant monument in the Cemetery of Marion Ohio has moved on its own. The unpolished base of the massive granite ball, that once rested on the pedestal, has moved for over a century. No one has a positive answer as to why the two and half tonne granite ball is able to move with out the help of any known external forces. There are many theories but no solid answer.The Merchant family, was a wealthy and important name in the early years of Marion. Soon after erecting the monument on the family grave site in 1896, the ball began to move, exposing the unpolished base beneath. The Merchant family, had the ball put back in its original place and secured the spot with tar. Little time passed before the ball was on the the move again. It's estimated to move about 2 inches every year. Some have speculated unnatural reasons for the movement; mystery vortexes or energy, restless spirits etc.. Something to do with astronomical alignments and 2012? Maybe not.

Hmm maybe it is just gravity. Denser material on one side of the sphere or something like that.

NASA needs to get on this!

Hi Mark,This is indeed mysterious. There are rocks in some desert that are moving as well, leaving tracks behind them. And I dimly remember that there was a guy in California who moved huge sculptures (or stones) around on his property - without any physical equipment.Perhaps there is a vibrational force, natural or otherwise, which we have not yet discovered.

Perhaps it's like the road in the North America. It goes down hill, but if you put your car in nutral, the car moves uphill. Like reverse gravity, maybe?

Posted 9-23-2020 | 6 comments
12 months ago, what started out as a tongue-in-cheek Facebook post became a social media phenomenon.

Posted 9-22-2020 | 10 comments
The space agency has officially published its $28bn plan to land humans on the lunar surface within four years.