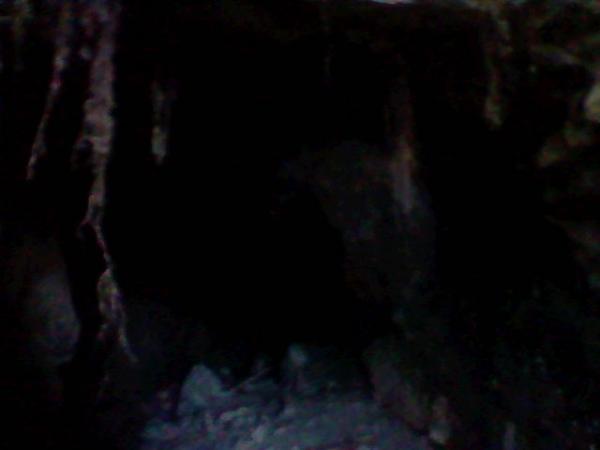 
Uploader comment: During I hike to a waterfall, in Cumberland,BC, Canada, my boyfriend and I found this cave. At first i thought it was so cool. I pulled out my DSI camara and started taking pics. I climbed up the rocks with my flashlight on shining it into the cave. It looked about 2 meters long before you could tell it turned in further. I put the flashlight on the ground pointing into the cave and walked right up to the opening i was clicking photos just looking at the camara display and not actually looking into the cave, i clicked three photos in a row walking closer as i took them. the first two pics were normal and then looking at the display of the pic i last took a seen, RIGHT away after clicking, what appeared to be some kind of wispy looking creature on the right of the pic. i looked up and seen the same thing. I tryied to turn around and run the hell away from the cave and fell into the rocks. I still, even after falling was very far away from it in seconds. I felt like something was triing to scare me. it Felt perdy evil. I have never said that before It felt evil just sounds right.

that is crazy scary

thank you my boyfriend thinks im nuts and sees nothing

I see what you think is the figure, but on closer inspection it appears to be the cave wall, all be it oddly coloured. I can see why you got scared. Humans have evolved to be afraid of dark places like caves (those that weren't got eaten by bears, wolves etc). You were probably on edge before you took the picture. Your subconscious prefers to be cautious so as soon as you saw something that looked like a threat, BANG! Massive adrenaline hit and your outta there!
On the forum
Spirituality, Religion and Beliefs

Did Jesus really preach that sermon?
Ghosts, Hauntings and The Paranormal

Kremlin guards could be controlled by en...
United States and the Americas