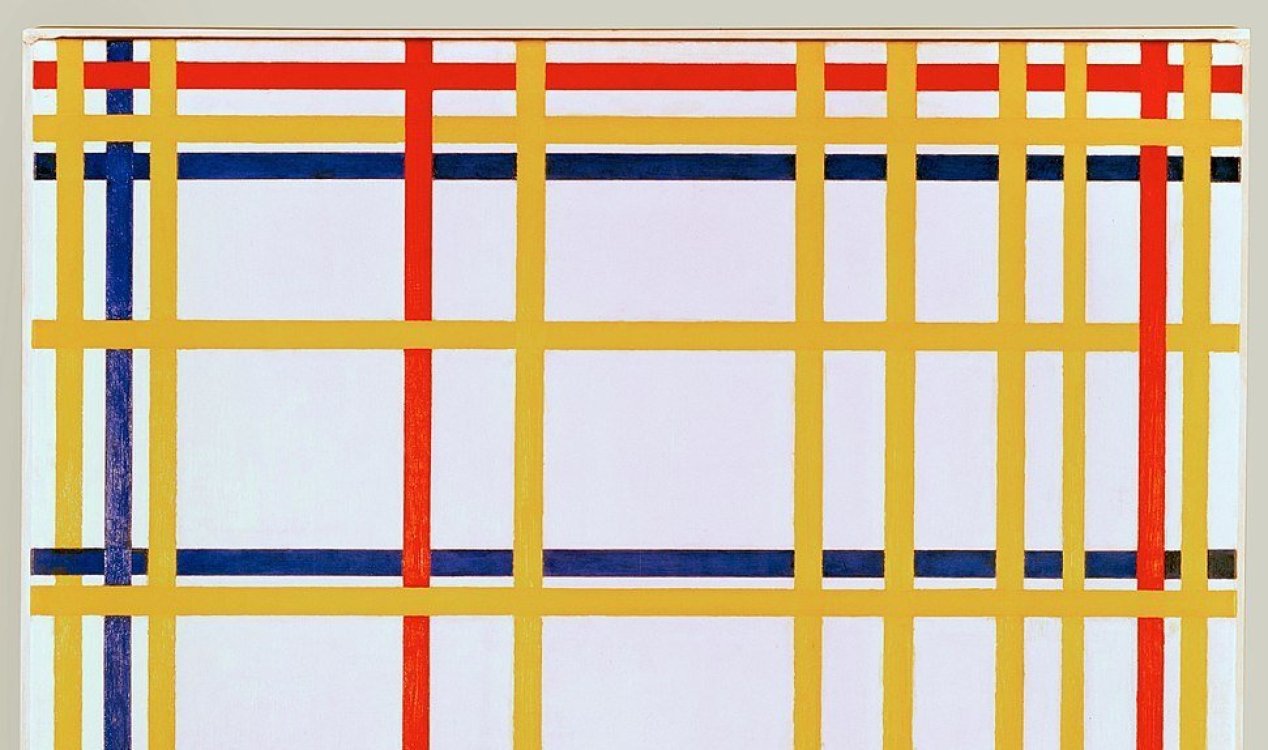 It's not exactly easy to tell which way up this is supposed to be... Image Credit: Piet Mondrian
The blunder, which had remained undiscovered until very recently, may never be rectified due to the painting's fragile state.
Known as 'New York City', the striking artwork - which consists of multiple criss-crossing colored lines - was painted by Dutch abstract artist Piet Mondrian back in 1941.

It originally went on display at New York's Museum of Modern Art in 1945 before later becoming part of the art collection of the German state of North Rhine-Westphalia in Dusseldorf in 1980.

Despite countless art historians and other experts viewing the piece over the last 75 years, only one managed to notice the fact that the painting had been hanging on the wall upside down.

Museum curator Susanne Meyer-Buser discovered the mistake after analyzing the painting for a new art show.

She realized that the lines at the bottom were thicker than those at the top, whereas the artist would have intended for it to be the opposite way around."The thickening of the grid should be at the top, like a dark sky," she said.

"Once I pointed it out to the other curators, we realized it was very obvious. I am 100% certain the picture is the wrong way around."

As it stands, however, it is unlikely that the error will ever be rectified because the painting is now so fragile that turning it the right way up could cause irreparable damage to it.

"The adhesive tapes are already extremely loose and hanging by a thread," Meyer-Buser told The Guardian. "If you were to turn it upside down now, gravity would pull it into another direction."

"And it's now part of the work's story."

#1 Posted by ouija ouija 1 month ago

As if it matters!

#2 Posted by susieice 1 month ago

It's kind of hard to figure which way is up

#3 Posted by acute 1 month ago

The moral of the story: Always sign your artwork.

As an artist, I'll never understand why crap like this even makes it to galleries. Looks like it was torn off a wall from an old McDonald's.

#5 Posted by jethrofloyd 1 month ago

Imagine if someone flipped Mona Lisa upside down for 75 years.

Now it's right side up and worthless

She'd be known as gravity-defying-Lisa

I'm with you Zebra3. I guess that art is in the eye of the beholder OR in the pocketbook of the person that owns the painting. If someone has to tell me that it is art then it probably really isn't.

#9 Posted by HSlim 1 month ago

I remember taking my daughters to an art gallery in Leeds (U.K.) when they were in their early teens (1980s) and it was mainly modern art on show.  My youngest was very dismissive of the blocks of solid colour on one such exhibit.  Anyone could do that, she declared, and I couldn’t have agreed more!  It’s not art, it’s self indulgence and a gullible public buying into it.  IMO, of course.