Family unearths creepy photograph under the floorboards of their home 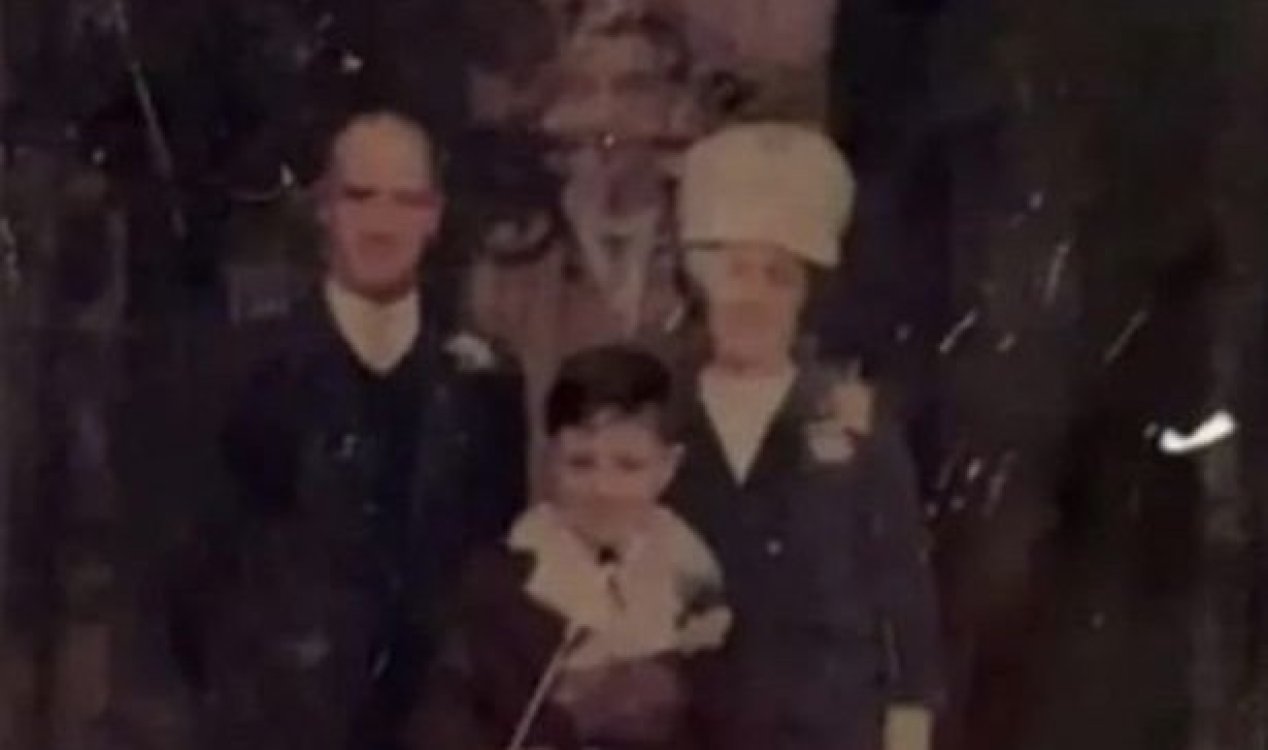 Who is the figure in the background ? Image Credit: Facebook / Beverley Edmondson Cropper
The image, which appears to date back to the 1960s, seems to show a ghostly extra hovering in the background.
When Beverley Edmondson Cropper, her partner and her son peered beneath the floorboards during renovation work at their home in Lancashire recently, the last thing they expected to find was a photograph left behind by the previous occupants of the house.

When they looked closer, however, it was evident that there was something off about it.

The image, which shows a family standing in front of the gothic archway of a church entrance, also shows a strange, distorted and semi-transparent figure standing in the background.

They were so spooked by the discovery, in fact, that they decided to put it back where they found it."There looks to be like a monk in the doorway of the photo - it's all a bit creepy," Beverley told Lancs Live. "No one claimed the photo, so my son re-buried it under the floorboards. Him and his dad had just moved in, and they are doing the property up, so we don't know the previous owners."

While many social media users suggested that the figure in the background could be a ghost, others were more skeptical, instead maintaining that it was more likely to be a photographic double exposure.

If this were true, however, why would the previous owners have sealed it up under the floorboards ?

Sadly, unless the family of the house's former occupants come forward, we will likely never know for sure who is in the picture or why the photograph was left there.

#5 Posted by ouija ouija 1 month ago

The central figure looks like a priest/vicar, which fits in with the other two figures wearing buttonholes and the woman, a huge hat . . . it's a wedding photo!

#6 Posted by glorybebe 1 month ago

It looks like a double exposure to me, the first shot wasn't advanced and another picture was taken over it.  Saw a lot of those in the photo lab back in the day.

Had someone just shown this to me, it never would have occurred to me that the person in the background wasn't part of the photo. Just seems to be a poor-quality photo that hasn't stood the test of time, and now looks rather shabby.

#8 Posted by Gilbert Syndrome 1 month ago

I mean, the website does need to keep posting new articles, and it's always a slow news day in the world of the paranormal.    But yeah, this is about as creepy as stripping your old wallpaper down and seeing height measurements for children that used to live in your home.

#9 Posted by Skulduggery 1 month ago

I'd have gladly added it to my photo album as an oddity. I do have a few found photos myself which are quite weird. Lovely stuff. Not a ghost probably.

All we found under our floorboards were BCT bus tickets from the 50's and 60's.

I am totally unnerved, horrified, and disturbed by the fact that this family has a portrait hanging behind them.

You're right, that totally does look like a picture frame behind them.

#13 Posted by newbloodmoon 24 days ago

The only thing under my floorboards are my second floor neighbors.

#14 Posted by LadyPhoenix 11 days ago

Monk??  Not in the picture form the article!  Four people - likely couple in front with the child, and another man in between and behind them.  No other figures and the man in the center doesn't look like a mink at all.  He's just a guy in a brown or tan suit.  Possibly the father of one of the other adults. but nothing spooky about him.  The photo could have been dropped by accident, and slipped through a crack.  Best move would have been to scan it into a computer and post it online, and possibly to print it in a local paper, or get a local news station to show it, with a "is this your famil... [More]