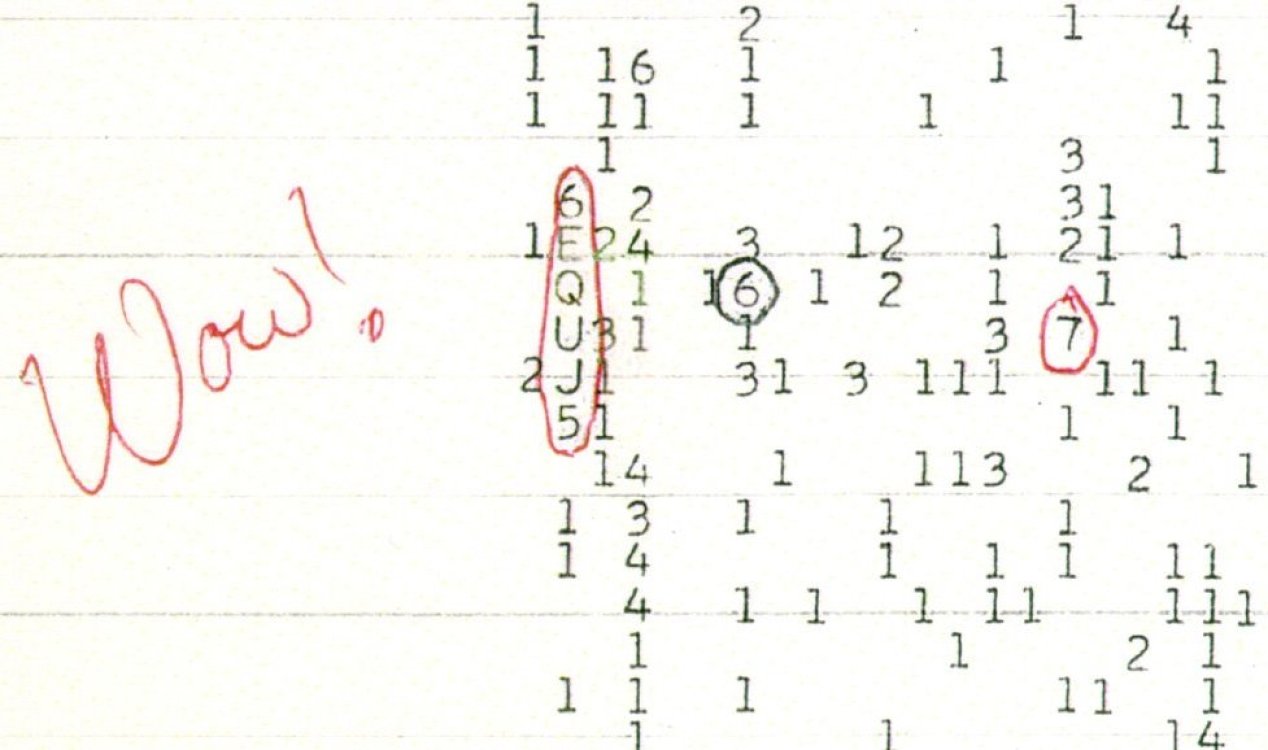 The word 'Wow!' was scrawled on the page at the time. Image Credit: NAAPO
The double telescopic study of this distant region of space aimed to listen out for any other interesting signals.
Astronomers have been listening out for extraterrestrial signals for years, but one case - that of a strange signal picked up by a school telescope at Ohio State University 40 years ago - has since remained one of the most tantalizing and perplexing examples ever recorded.

Originating in the globular cluster of M55 in the constellation Sagittarius, the peculiar signal lasted approximately 72 seconds. Astronomer Jerry Ehman, who was the first to examine the computer readout, famously wrote the word 'Wow!' on the page.

Although most experts have since dismissed the signal as naturally occurring, the specifics surrounding its source have remained a topic of debate for decades.

Now, 40 years on, astronomers from multiple countries have combined their efforts to conduct a renewed study of the region of space from which the signal was picked up.Using both the Green Bank Telescope in West Virginia and the Allen Telescope Array in California, the team focused on a specific star - 2MASS 19281982-2640123 - that had been previously pinpointed as the most likely source of the signal.

Sadly, though, despite their best efforts, the search ultimately came up empty.

Not all is lost, however, as the exercise did serve as a perfect demonstration of how a similar search might be carried out elsewhere - perhaps with a focus on an even more tantalizing target.

For now, though, the 'Wow!' signal's true source remains just as elusive as ever.

The signal came in close to the 21 cm hydrogen line, a frequency proposed as a place to look for an intelligent broadcast due to it being in a quite part of the spectrum.  Also the target star, that may have been in the area of the signals origin, is estimated at  light years.  The best guestimate for the distribution of life in the Galaxy would put our nearest neighbor at between 1500 and 2000 LY, which this candidate area would also fit within.  Not as it proves anything but interesting non the less.

#3 Posted by Hyperionxvii 2 months ago

Waste of time. There ain't no aliens. Well, there might be. But the Fermi Paradox has already been solved and the answer is that 'They are too far away'. They are either too far away to contact by any means we know of, like radio waves, or even if we could contact them, we could never receive a reply. It's sad, but this is a complete waste of time. I grew up watching the original Star Trek and as soon as I realized this, I was depressed.

#4 Posted by Chaldon 2 months ago

Nope. It's not solved, where did you get that? Besides, nothing at all is proven until a direct evidence is acquired. To prove that no other life exists or even that they are too far we have to dismiss the very fact that we ourselves are thriving here, not just "existing". Life as here on Earth is too abundant to be extraordinary, and our intelligent species became too numerous as well. So they must be somewhere, their existence is very probable. Not finding them yet only diminishes the chances of finding them using the same methods, but since we have a direct evidence of the possibility of ab... [More]

#5 Posted by jethrofloyd 2 months ago

The 40-Year Old Mystery of the "Wow!" Signal Was Just Solved 'These comets, known as  266P/Christensen and 335P/Gibbs, have clouds of hydrogen gas millions of kilometers in diameter surrounding them. The Wow! Signal was detected at 1420MHz, which is the radio frequency hydrogen naturally emits. Notably, the team has verified that the comets were within the vicinity at the time, and they report that the radio signals from 266/P Christensen matched those from the Wow! signal'. https://futurism.com/the-40-year-old-mystery-of-the-wow-signal-was-just-solved

#6 Posted by Portre 2 months ago

Or poor alien creature got fired for blowing their cover.

#7 Posted by Portre 2 months ago

The TV show Phantom Signals, episode 2, "Alien Evidence: The Holy Grail" states the comets would not have produced a signal as strong as the "WOW" signal.

#8 Posted by qxcontinuum 2 months ago

We will never find intelligent life out there even if it's sitting right into our eyes because of the army of unprepared scientists ready to split the hair in 4 finding a reason to refute an idea.   It's very possible that those who have sent the wow signal have done it either in distress or an episode like we do on Earth.  Here we don't always send comms out of our space but once every like 20- 30 years or so.  Oumoumomma  Case was the best example of how ignorant and unprepare NASA and other space agencies  can be when there are solid chances of finding extraterrestrial intelligence.

By the time they found out the source of the signal, the microwave oven landed in the garbage dump 30 years ago.

I was thinking since it has been 55 years they might need to adjust the location they scan to a closer position, in case it is something traveling towards us.

In my opinion it was a burst transmission one of them secret Earth spaceships. Probably piloted by Neil Armstrong's 'brother'. :-p

Mystery of dog-walker who has vanished
Science and Technology