Milky Way may be home to 30 'active' alien civs

How many alien civilizations are out there ? Image Credit: CC BY 3.0 CSIRO
A new study has sought to calculate how many intelligent extraterrestrial civilizations might exist in our galaxy.
The question of whether we are alone in the universe remains one of the biggest philosophical conundrums of our time. While it seems almost inconceivable that our civilization is alone in the cosmos, the fact still remains that we have yet to see any evidence to the contrary.

Now though, a new study has put forward the notion that the Milky Way galaxy alone could be home to as many as 30 alien civilizations based on how intelligent life evolved on our own planet.

"There should be at least a few dozen active civilizations in our galaxy under the assumption that it takes 5 billion years for intelligent life to form on other planets, as on Earth," said astrophysicist Prof. Christopher Conselice from the University of Nottingham.

"The idea is looking at evolution, but on a cosmic scale."The study authors assumed that any given intelligent alien civilization would require a metal-rich environment in order to evolve - again based on our own evolution and development.

To come up with a figure, they then analyzed existing planetary data to estimate how many suitable worlds might exist in the Milky Way and how many of these were likely to produce intelligent life.

Given the vast scale of the galaxy however, even if there were 30 civilizations, the sheer distance between them would make contact difficult - if not impossible.

There's also the problem of whether or not intelligent life has a habit of wiping itself out.

"If we find that intelligent life is common then this would reveal that our civilization could exist for much longer than a few hundred years, alternatively if we find that there are no active civilizations in our Galaxy it is a bad sign for our own long-term existence," said Prof Conselice.

"By searching for extraterrestrial intelligent life - even if we find nothing - we are discovering our own future and fate."

Got to wonder how they come up with that number. Yet there are many billions of suns in our galaxy alone.

#17 Posted by Mr.United_Nations 2 years ago

#18 Posted by Sir Wearer of Hats 2 years ago

I dunno, they’re awfully self-destructive on the whole. Not very civilised.

#19 Posted by astrobeing 2 years ago

#20 Posted by Hankenhunter 2 years ago

This site has it narrowed down to 8. Carl Sagan said 10. https://www.cnet.com/google-amp/news/scientists-estimate-the-number-of-intelligent-alien-civilizations-in-the-galaxy/

#21 Posted by astrobeing 2 years ago

"But as it is, the Drake equation is fundamentally 'unsolvable' and contains a major variable we can't know until we find intelligent life: What's the average length of time alien civilizations are detectable?" This is just one of the major variables we don't know. Solving an equation when you don't know what values to put in it is at best a waste of time and at worst a way to mislead people. It's like a crook investor who "guarantees" a 20% return on your investment.

Dr. Frank Drake never intended his famous equation to provide firm answers. This was understood from the start. Various persons have gotten widely varying answers from it, using figures for the variables which the preferred.  The Drake equation was devised to provoke thinking about the issues involved. It has certainly succeeded in that. It has also spurred thinking about how the equation could be modified to deal with newly-conceived factors, which Dr. Drake did not consider, such as territorial expansion of species from their home worlds to others. 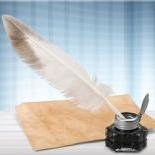 Calling numbers on how many civilizations there could be in the universe, is wet work at best. First of all we still have no clue whatsoever on our own evolution as humans. Think of the missing link for instance which is still not solved.  Secondly and I do not remember who actually made that docu anymore. The chances of evolution going towards being a species that is intelligent enough to evolve towards space travel are enormously small. Factor in the time how long that species planet exists and how fast it evolves. Measure in the chance of some natural catastrophe on that planet, like we h... [More]

#24 Posted by XenoFish 2 years ago

I'd say there are zero signs of intelligent life in the milky way.

#25 Posted by travelnjones 2 years ago

I am most fond of the "Effectively no Aliens'" idea.  Basically that when you factor time in the changes of two species meeting becomes less and less.  Perhaps you will come upon proof they once existed or once existed in a particular area, but not really anything face to face. a couple of silver spoons, hoping to find were two of a kind.

Massive Tunnel' Found From Mexico Into U...

Many in Mideast see hypocrisy in Western...
Extraterrestrial Life and The UFO Phenomenon