Man modifies himself to become a real-life orc

This is taking body modification to a new level. Image Credit: Instagram / orcinfernall
The 41-year-old, who goes by the name 'Orc', has turned himself into a character out of a video game.
It could be argued that there are some people who take body modifications and tattooing a little too far, as evidenced by 'Orc' - an enthusiast from the Brazilian town of Iguatemi who has had so much work done to his body that he doesn't even look human any more.

He had his first tattoo done when he was just 15 years old and has since undergone a variety of procedures to make himself look like his namesake - a fictional orc-like creature.

In addition to covering 80% of his body in ink, Orc has had both of his eyeballs tattooed black, his tongue split into a fork and has even had two large tusks fitted over his bottom teeth.

He has also reshaped his ears and has multiple subdermal implants.

"I am trying to be myself, these are just my ideas, my inspirations coming from the heart, I am not inspired by anyone," he says.Even his wife has got in on the act with several tattoos and body modifications of her own.

According to reports however, his mother isn't exactly a fan of his new look.

#12 Posted by Manwon Lender 2 years ago

You make a fair point, but it ruins Halloween because you can't ever change your costume!!

#13 Posted by Hankenhunter 2 years ago

I wonder how he is at finding truffles?

#14 Posted by Hankenhunter 2 years ago

Perfect response. Mine was ewwwwww.

each to their own i guess

#16 Posted by HawkLord 2 years ago

Those tattoos look like they were done with a permanent marker.

#17 Posted by Manwon Lender 2 years ago

Well no matter his sexual orientation he will never kiss another human again!!!!!!!!

#18 Posted by Hankenhunter 2 years ago

I'd be willing to bet that they can be removed, so that he can eat, and not drool all over the place. He only puts them in when he needs his attention fix. I guess it was inevitable that some some dental surgeons would buckle to the cash grab being done in the body morphing craze. Medical ethics were set aside with this guy. 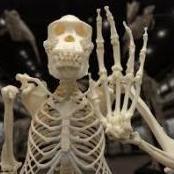 Am I the only envisioning future archaeologists excavating his grave and the look on their faces?

Not my personal idea of beauty, but to each their own.

#21 Posted by WolfHawk 2 years ago

All that and he needs glasses? C'mon! Couldn't go for the lasick, too? And, no Mellon Man, you are not the only one picturing future archeologists... even alien archeologists!

Why do so many bikes end up in rivers an...
Spirituality, Religion and Beliefs