Things have been going from bad to worse for one young Scottish mum. Image Credit: sxc.hu
A young mother from Scotland believes that something sinister is haunting both her and her children.
The woman, who hails from Glasgow in Scotland, is convinced that her home is haunted and that an unwelcome spook has been interacting with her young children.

The phenomena experienced by the family include toys moving by themselves, taps being turned on, strange banging noises in the night and even sightings of a sinister shadow.

"It started happening a few months back, with the tap in the kitchen turning on or the fridge door open, or hearing things at night," she said.

"I heard the creek from the baby gate a few times but looked at the monitor and the wee one was sleeping. Another time I walked past my living room to go to the kitchen at night and saw a shadow at the corner of my eye going into my bedroom."Ever since the phenomena began, her young daughter has started having nightmares. On one occasion, she even made reference to a 'monster' sleeping in the corner of her room.

"I want to move because of these things happening, my dad's not very happy with it either, he thinks there is too much negative energy is in the house," she said.

When asked if she was considering eliciting the services of a medium, she said she was open to it.

As things stand, however, exactly what might be responsible for these phenomena continues to remain a mystery.

#1 Posted by quiXilver 6 months ago

#2 Posted by acute 6 months ago

#3 Posted by Piney 6 months ago

#4 Posted by OverSword 6 months ago

#5 Posted by TashaMarie 6 months ago So is it a ghost monster or both?

#6 Posted by jethrofloyd 6 months ago 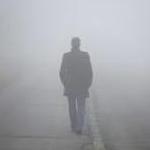 #8 Posted by Alchopwn 6 months ago

#9 Posted by quiXilver 6 months ago

If you're really worried.  Move.