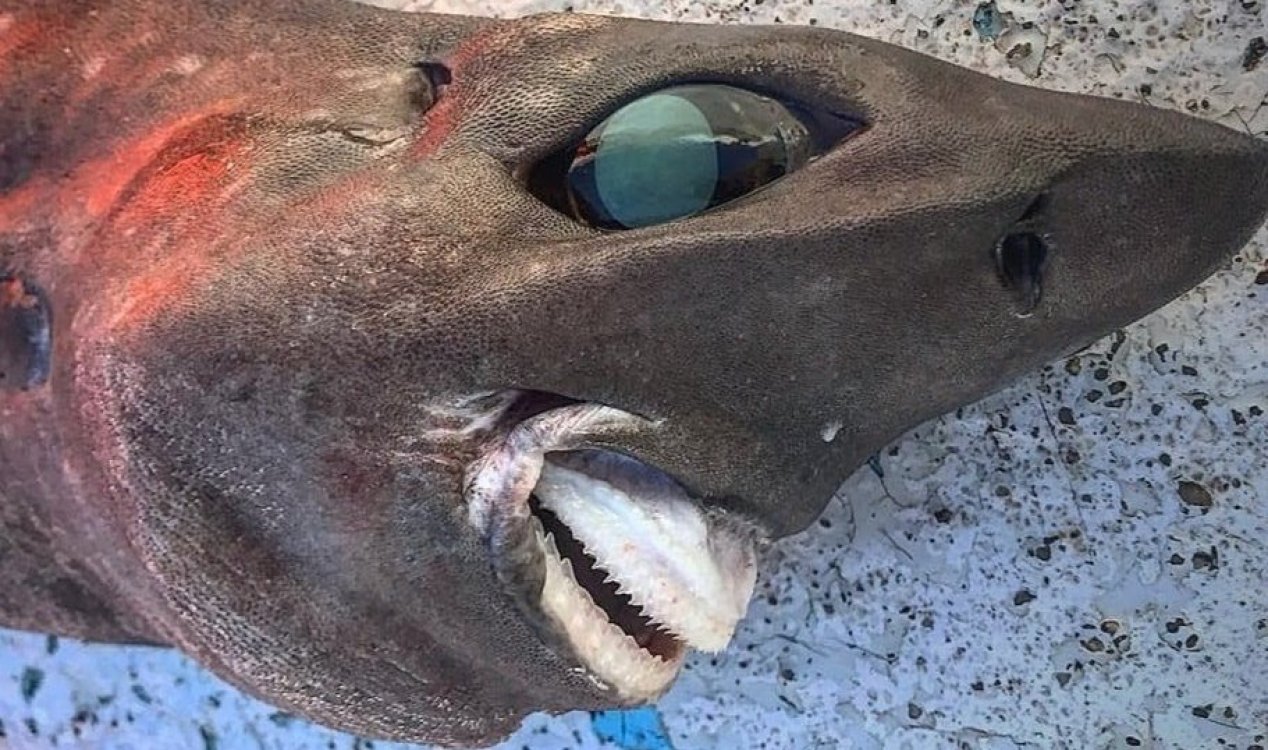 What type of shark is this ? Image Credit: Facebook / Trapman Bermagui
A fisherman recently reeled in a rather strange looking shark and nobody is quite sure what species it is.
Sporting bulging green eyes and a set of teeth that look like they belong in the mouth of something out of a horror movie, this unusual looking shark was recently caught off the coast of New South Wales at a depth of around 2,130 ft by an angler who goes by the name 'Trapman Bermagui' on social media.

After posting an image of the catch on Facebook, he was quickly inundated with comments from other users who were keen to figure out exactly what species the unusual shark could possibly be.

Some joked that the shark appeared to be wearing 'false teeth', while many others commented on its bizarre and disturbing appearance, labeling it "the stuff of nightmares".As for the species, many suggested that it could be a cookiecutter shark, goblin shark or lantern shark, but Bermagui disagreed, instead maintaining that it was most likely a rough skin shark, otherwise known as an 'endeavor dogfish' depending on which market it is being sold at.

Whatever the case, you certainly wouldn't want to come face-to-face with it while swimming...

Thanks for the update, and apparently I was also wrong when I said they killed it because it was found dead so I am screwing up by the numbers today!

#9 Posted by Orphalesion 3 months ago

I also made a mistake. They are apparently considering several identities for this shark, one possibility is some kind of kitefin shark, another possibility is an "endeavour dog shark" and it could also be a new species because it appears the several deep sea sharks look similar to each other and so it's difficult to tell. When I first saw it I thought it was a Chimera or "Ghost Shark" https://en.wikipedia.org/wiki/Chimaera

#10 Posted by Poncho_Peanatus 2 months ago

its quite cute for a shark...

#11 Posted by pallidin 2 months ago

The teeth remind me of the 'slingshot' jaws of the Goblin shark. I don't think it is one though.

#13 Posted by Amorlind 2 months ago

Did the title give it away?

It's a knifetooth dogfish. link

#16 Posted by WolfHawk 2 months ago

Is there information on it's size anywhere?

#17 Posted by Golden Duck 2 months ago

It could be a drop-shark.