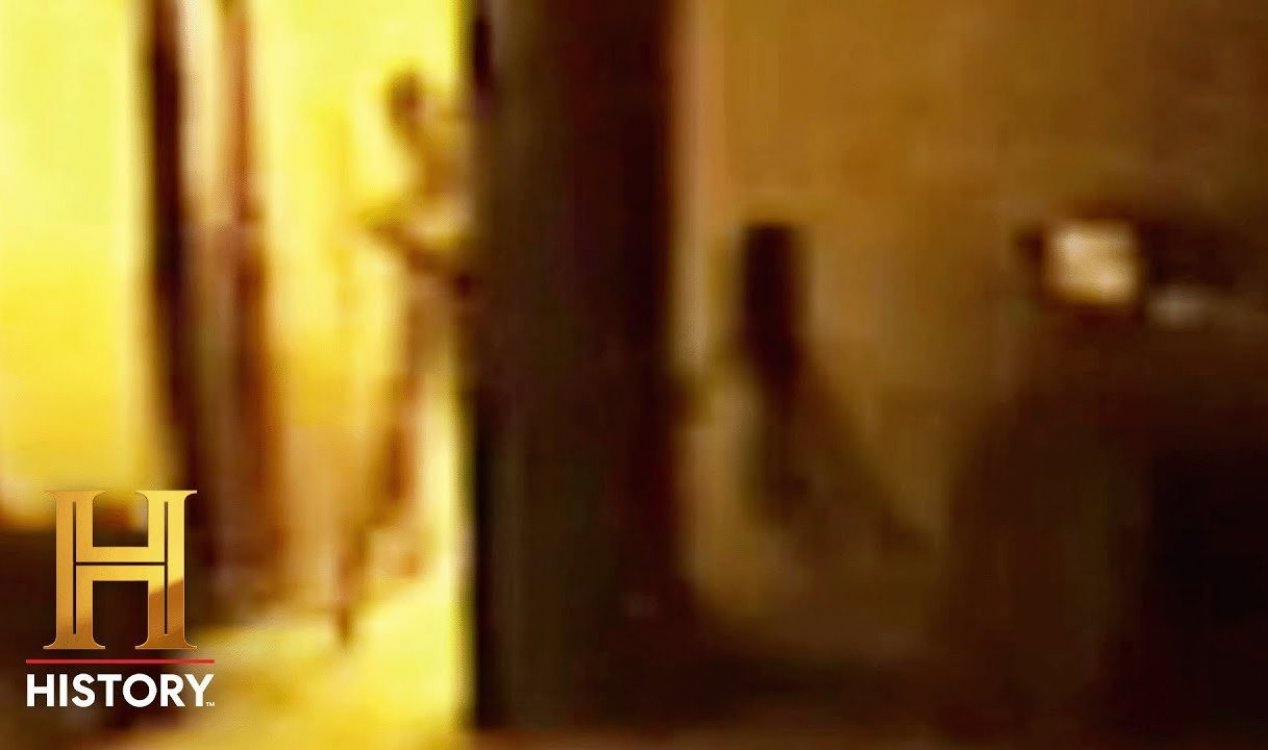 Who or what is this unexplained visitor ? Image Credit: YouTube / HISTORY
Footage recorded in 2006 allegedly shows an unidentified entity entering a man's bedroom in the middle of the night.
The eerie clip, which was posted up earlier this month on the official YouTube channel of The History Channel, was previously broadcast in an episode of 'The Proof is Out There' - a 2021 TV series that attempted to get to the bottom of a number of different unexplained phenomena.

This particular episode had featured the story of a man named David who recorded something strange on CCTV camera at his home in Pensacola, Florida back in 2006.

He had been asleep in his bedroom one night when the camera suddenly picked up what appeared to be a tall, thin humanoid entity peering around the side of the door.

The clip shows the figure briefly moving into view, as though surveying the room.While the quality of the footage is rough to say the least, it certainly does appear to show a strangely proportioned and abnormally tall and skinny 'person' in the doorway.

The show on which the clip was featured then likens the figure to a stereotypical alien 'grey' - the most common depiction of an alien entity in popular culture.

As it stands, however, it's difficult to tell what the figure is - there's a possibility that it's simply a human and that the footage has distorted their appearance somehow - and it's also possible that the whole thing is a hoax.

That is definitely a Alien

Lol, calling people names for scoffing at crap blurry prove zip videos is the go to of the empty handed credulous dear true believer. No one has ever posted a HD unedited pic or video with proper provenance and chain but when they do then get back to me. And spewing about having coffee with the potus, in the context of your rant that just makes you look more angry and asinine. But again, when that really does hapoen let me know.

If this were an authentic video, why would it just suddenly stop when the creature was only partly visible? It seems that if the alien were actually coming in the bedroom, it would have been captured by the closed circuit tv.

#21 Posted by Trelane 2 months ago

You find open dialogue with differing viewpoints bewildering? What sort of echo chambers have you been locked in? I for one am completely open minded. I consider what is presented. Then by applying logic and reason I make an assessment. If my opinion contrasts what you or others think isn't my problem.  Everyone is free to voice their opinions here. Just as others are free to question what is presented. You might want to grow some thicker skin.

#22 Posted by Trelane 2 months ago

Yes, some folks here do work in the intelligence community. What's your grievance with that?  Oh, I get it, you trying to be ironic. Hmm. Nice try I guess.

It’s so grainy and pixelated there is no proof of anything in the video other than it looks like a person stepping up looking around but it’s almost puppet or robotic like. Possibly even poor animation attempt over actual video.

So are you inflating your ego by putting down anyone with a different opinion or one you do not like, sure sounds like it. Just who besides yourself is closed minded and shooting down free and open discussion? I fully own that i am a cynical skeptic down right snide at times but only after ive been presented with bad attitude and out right insult for asking for supportive evidence to back up a story and that is what open discussions are all about. I do not harp on anyone after they present what evidence they have i also do not blindly believe stories and stories are not evidence. I go with wha... [More]

Ive seen an entire special on this guy.. most of it seems legit. But then theres the 1 or 2 things that are beyond B.S. in my opinion..which is all it takes to flush it all... The video is terrible yes,  even clips from Ghost adventures are clearer than this..I think abductions happen. Im not sure how they are supposed to look, interesting stuff here.

Really?! I dont find the evidence to support it, its complicated, we cant even prove aliens are out there who would be able to come here and do these things to people. Then why and why so sloppy and incompetent? Then i look at work by people like susan blackmore and Michael persinger and i believe alien abductions are real but only real the the experences mind not real as in aliens make the trip here to do it in reality.