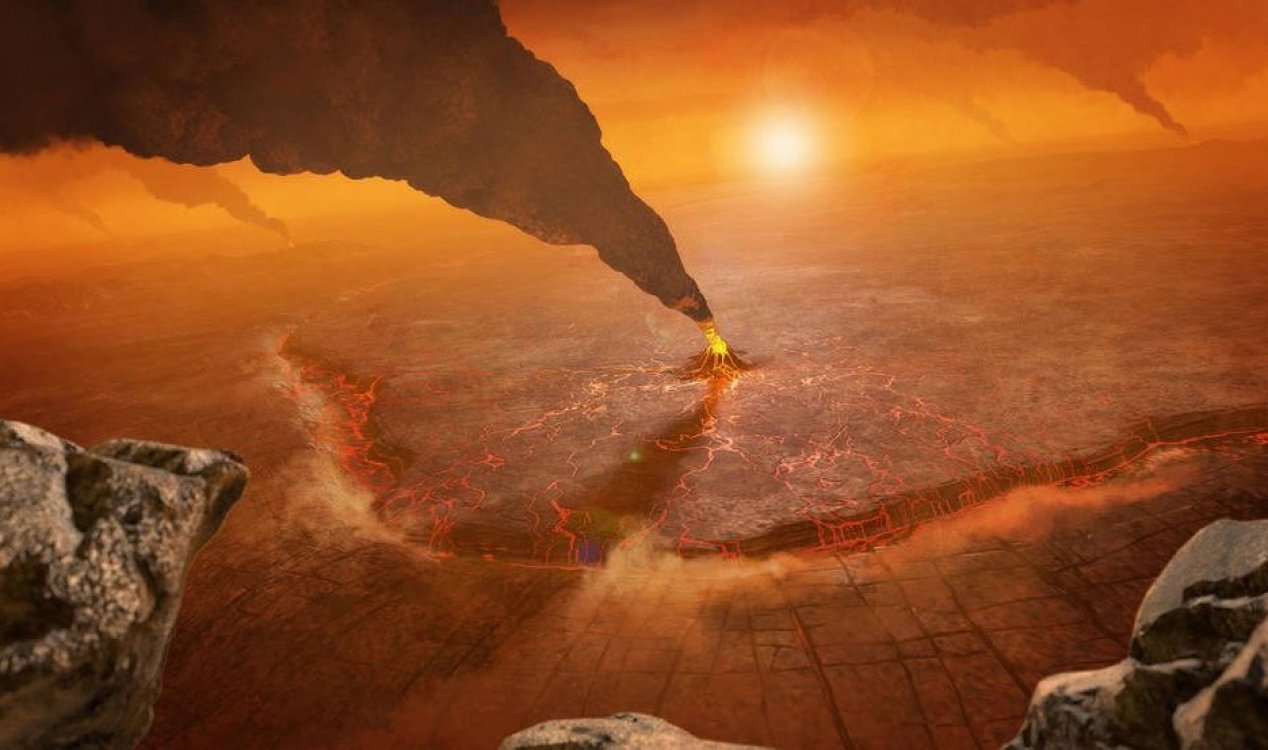 An artist's impression of an active volcano on Venus. Image Credit: NASA / JPL-Caltech / Peter Rubin
This hostile, high-pressure world is relatively close, but its surface conditions are undeniably hellish.
Venus, often called Earth's "evil twin" planet, formed closer to the Sun and has since evolved quite differently from our own planet. It has a "runaway" greenhouse effect (meaning heat is completely trapped), a thick carbon-dioxide-rich atmosphere, no magnetic field and a surface hot enough to melt lead.

Several uncrewed scientific missions will study how and why that happened in the next decade. But now some scientists want to send a crewed mission there as well for a flyby. Is that a good idea?

With a slightly smaller diameter than Earth, Venus orbits closer to the Sun. This means that any water on the surface would have evaporated shortly after its formation, starting its greenhouse effect. Early and sustained volcanic eruptions created lava plains and increased the carbon dioxide in the atmosphere - starting the runaway greenhouse effect, which increased the temperature from just a little higher than Earth's to its current high value of 475C.

While the Venus year is shorter than ours (225 days), its rotation is very slow (243 days) and "retrograde" - the other way round to Earth. The slow rotation is related to a lack of magnetic field, resulting in a continuing loss of atmosphere. Venus' atmosphere "super-rotates" faster than the planet itself. Images from many missions show V-shaped patterns of clouds, composed of sulphuric acid droplets.

Despite the harsh conditions, some scientists have speculated that Venus' clouds might at some altitudes harbour habitable conditions. Recent measurements apparently showing phosphine - a potential sign of life as it is continuously produced by microbes on Earth - in Venus' clouds have been strongly debated. Clearly, we need more measurements and exploration to work out where it comes from.

What we know about Venus so far has been gathered from several past probes. In 1970-82, for example, the Soviet Venera 7-14 probes were able to land on Venus' harsh surface, survive for up to two hours and send back images and data. But there are remaining questions about how Venus evolved so differently from Earth, which are also relevant for understanding which planets orbiting other stars may harbour life.

The next decade promises to be a bonanza for Venus scientists. In 2021, Nasa selected two missions, Veritas and DaVinci+, due for launch in 2028-30. The European Space Agency selected EnVision for launch in the early 2030s. These are complementary, uncrewed missions which will give us deeper understanding of Venus' environment and evolution.

Veritas will map Venus' surface to determine the geological history, rock composition and the importance of early water. DaVinci+ includes an orbiter and a small probe that will descend through the atmosphere and measure its composition, study the planet's formation and evolution and determine whether it ever had an ocean. EnVision will study the planet's surface, subsurface and atmospheric trace gases. It will use radar to map the surface with better resolution than ever before. India also plans an uncrewed mission, Shukrayaan-1, and Russia has proposed Venera-D.

Do we need crewed flybys? The idea of a crewed flyby of Venus was suggested in the late 1960s, and involved using an Apollo capsule to fly people around the planet. But this idea ended when Apollo finished. Now, the Artemis project to fly around the Moon, and other ideas of crewed missions, have led to the idea being floated again, most recently in journal papers and at a recent meeting of the International Astronautical Federation, an advocacy organisation, in September 2022.

The idea would be to fly a crewed spacecraft around Venus and return to Earth. This would allow scientists to test deep-space techniques such as how to operate a crewed mission with significant time delays when communicating with Earth. It could therefore prepare us for a more complex, crewed mission to Mars. However, the crew wouldn't do any landing or actual atmosphere investigation at Venus - the conditions are way too harsh.

The researchers who back this idea argue that you could also use Venus' gravity to alter the spacecraft's course for Mars, which could save time and energy compared with going directly from Earth to Mars. That's because the latter option would require the orbits of the two planets to be aligned, meaning you'd have to wait for the right moment both on the way there and back. However, as a crewed mission to Mars would be highly complex, going directly from Earth to Mars would keep designs simpler.

Sending humans to a planet that may harbour living organisms also won't make it easier to find them. It is risky - we may end up contaminating the atmosphere before we discover any life. The best way to look for biochemical signs of life is with uncrewed probes. There would also be significant thermal challenges and higher radiation from solar flares due to closer proximity to the Sun.

And, unfortunately, with a flyby mission like this, only a few hours of data would be possible on the inbound and outbound trajectories. It would be a highly expensive venture, which would no doubt produce some amazing imagery and useful additional data. However, this would add little to the detailed and much longer bespoke studies currently planned. I, therefore, believe the likelihood of a crewed mission to Venus is very unlikely.

There have also been conceptual, more far-fetched studies - including sending crewed airships to hover in Venus' atmosphere, rather than just flying by. This is a nice idea, which may achieve more science than a flyby, but it remains a distant and unrealistic concept for now.

For the moment, we only carry out crewed exploration in low-Earth orbit. The Artemis project, however, aims to fly people around the Moon and build a station, called Gateway, in lunar orbit. This is being designed to do science, enable crewed landings on the Moon and crucially to test deep space techniques such as refuelling and operating in a remote environment that could in the long run help get us to Mars without doing training at Venus.

#1 Posted by pallidin 2 months ago

Not a desirable vacation destination.

Mercury, Venus, and Mars are all technologically feasible. Venus would be the hardest for keeping a colony cooled. It would be akin to figuring out how to keep an object at room temperature inside an oven on full blast.

#3 Posted by oliverjanssen 2 months ago

why send a human? just make some drones...

#5 Posted by Occupational Hubris 2 months ago

Venus' atmospheric pressure is 92 times greater then that of Earth. There will never be a colony on the surface. Venera 13 lasted around 2 hours before being crushed as it melted. The others didn't make it an hour.

#6 Posted by Festina 2 months ago

NCC1701 Venus doesn’t want the rich and wealthy and they don’t want Venus. They are looking to go Backwards to Mars. All evolving growing things move towards the Sun. The light of the World.

If that were true then wouldn't it also be true that a fair amount of geo-engineering could make the planet Earth a paradise for everyone?

#8 Posted by Alchopwn 2 months ago

Why wouldn't it be a good idea?  We need more crewed space missions imo.