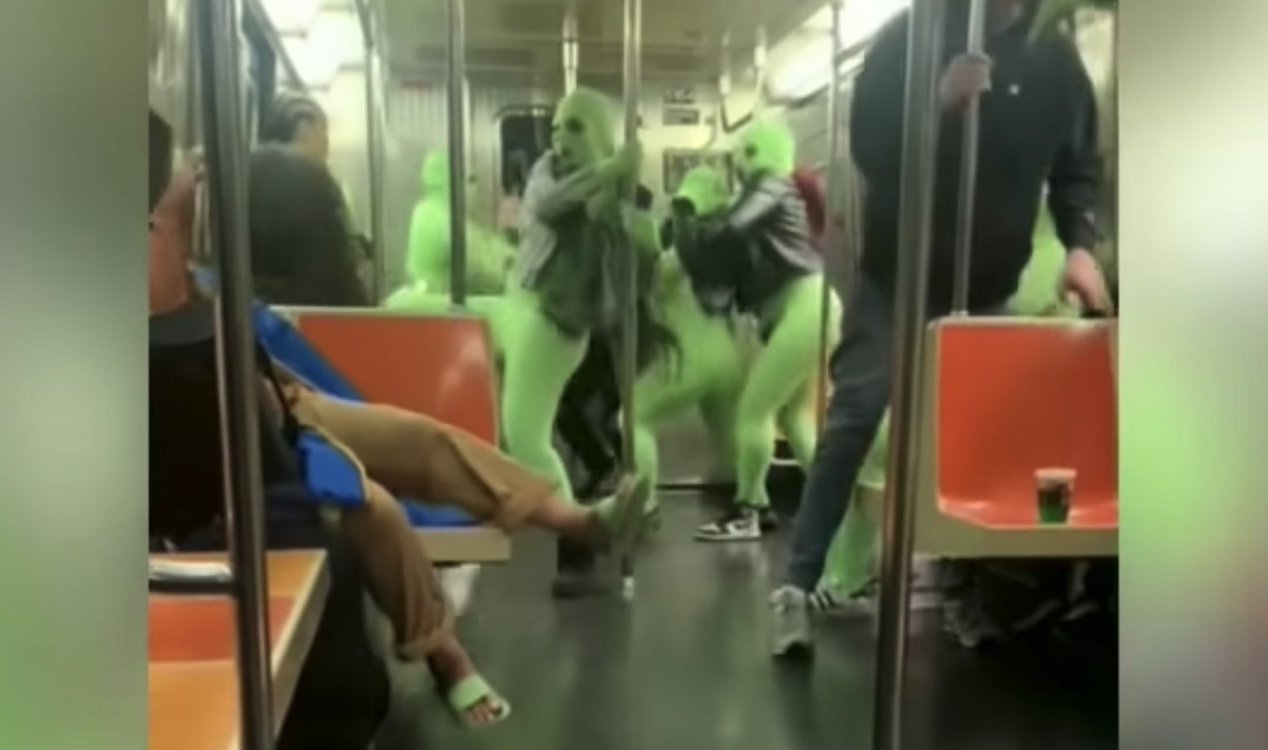 The culprits were eventually identified by police. Image Credit: YouTube / FOX 5 New York
A bizarre viral video has emerged online showing a combative group of women dressed up in green body suits.
Police were called upon to determine the identities of around half a dozen woman who clambered aboard a subway train and proceeded to attack two 19-year-olds after a verbal altercation turned physical on the evening of October 2nd.

The culprits, who appeared to be dressed up as green extraterrestrials, were clad in brightly colored body suits from head to toe, making it impossible to see their faces.

A video clip of the incident, which shows the mayhem that ensued, quickly went viral on social media.

Now, more than a week after the incident, local news reports have revealed that police had finally determined who was responsible - a notorious group of women known as the "Green Goblin Gang".Ranging in age from 36 to 24, these individuals were well known to the police and had been involved in a number of other incidents resulting in at least 15 arrests between them.

The two victims, who had been celebrating their birthdays, were also robbed of their phones and bags.

"She said she was attacked by aliens, and I didn't know what she was talking about," said the mother of one of the victims.

"Yesterday was her birthday. This is how she spent her 19th birthday. I hope they get what they deserve and then some because it's disgusting."

Did intelligent aliens visit and guide the ancient Mesopotamians ?
10-9-2022

Now they will have to change his name to "Green Goblin Prison Gang".

#2 Posted by Hawken 2 months ago

I think the only subway I'll go in is to get a sandwich.

#3 Posted by Myles 2 months ago

I'd call them green thugs not green goblins.

#4 Posted by Amorlind 2 months ago

Only time i would be glad to see the government practice a threat elimination as in X-Files ;-) bad bad aliens !

#5 Posted by Herr Falukorv 2 months ago

why is no one intervening?

intradimensional being or alien?
Spirituality, Religion and Beliefs