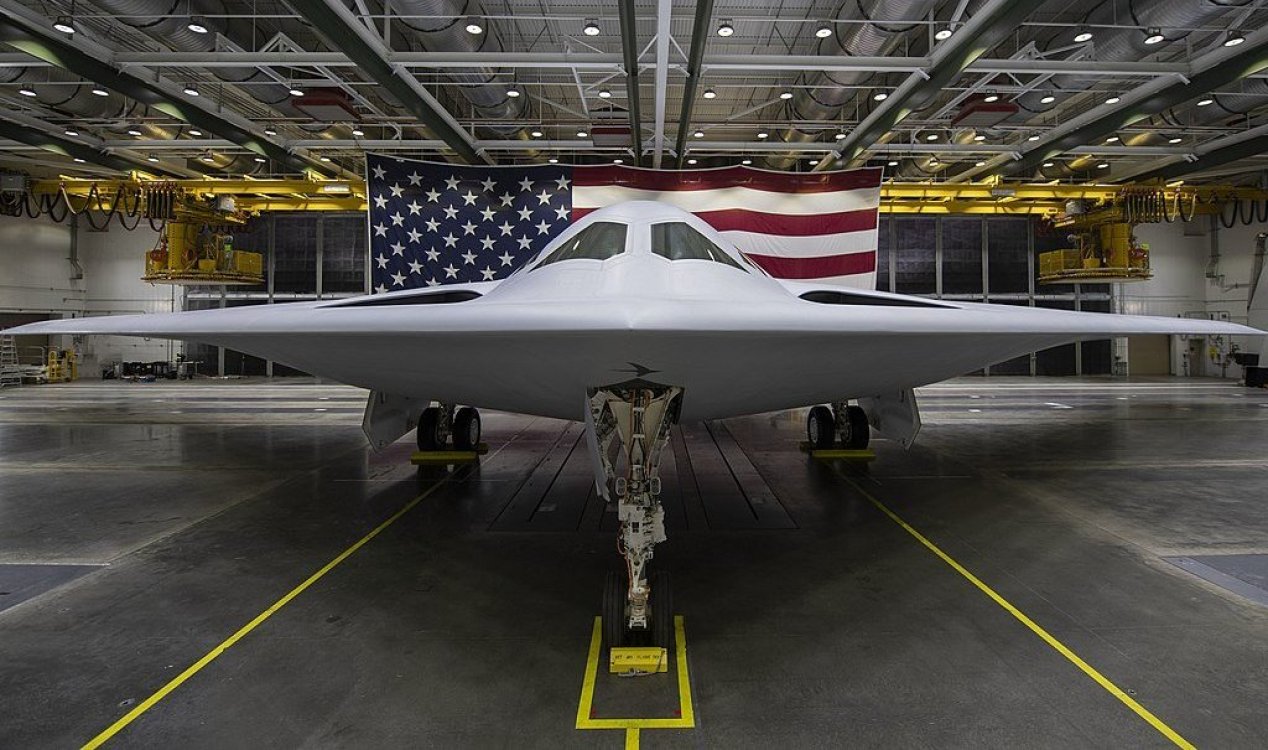 The B-21 will form the backbone of the US Air Force. Image Credit: Staff Sgt. Jeremy Mosier, United States Air Force
Developed by Northrop Grumman, the new raider is capable of carrying both conventional and nuclear payloads.
Designed to be a long-range strike stealth bomber that will replace the older B-1 and B-2 models, the B-21 is the country's answer to China's recent efforts to build up and modernize its military.

The US Air Force will purchase at least 100 of the new bombers at a price of $700 million each.

"The B-21 will join the nuclear triad as a visible and flexible nuclear deterrent; supporting national security objectives and assuring our nation's allies and partners," a Northrop Grumman spokesperson said, adding that it will be "capable of penetrating the toughest defences to deliver precision strikes anywhere in the world" and "is the future of deterrence".The bomber was unveiled at a ceremony at the manufacturer's facility in California on December 2nd.

"We last introduced a new bomber over 30 years ago," said Air Force Chief of Staff General C Q Brown Jr. who described the unveiling as a "historic moment for our Air Force and the nation".

"As we look to the threats posed by our pacing challenge; we must continue to rapidly modernize."

"The B-21 Raider will provide formidable combat capability across a range of operations in highly contested environments of the future."

Well, it may not actually be sad at all my friend,  it entirely possible that isn’t its only capability. I wouldn’t be at all surprised if it had the ability to carry out missions within and also outside our atmosphere (  possibly from Space ) because the B2 Bomber was able to as stated below! Now, could you think of what it could be used for if it also has the capability to enter space and operate in space? Now, I am only pontificating here because there has been no information released that would corroborate such a claim and I am also not trying to create any conspiracy theories either, howe... [More]

#50 Posted by Tatetopa 1 month ago

Thanks.  I was guessing next or soon after it has got to be  a space plane capable of ground takeoff and the capability to reach earth orbit then land again.  That would require more than jet engines.  Since NASA and commercial ventures are already looking toward this, the Air Force  must feel pretty driven to get there first.  I see the mention that B-21 is pilot optional and with a staggering array of sensors  and the capability to use directed-energy weapons like lasers.

#51 Posted by Hammerclaw 1 month ago

I've known what it means in country for a long time. You BOO COO DINKY DOW, You NUMBAH TEN, When you hear this brother, your **** is in the wind.     I think this was a saying straight from Ho Chi Minh, 'cause the kids would say it time and time again.   The meaning behind this if you want to know, means you are crazy, and they want you to go.   The meaning of BOO COO is Many and Much, DINKY DOW means crazy and don’t touch.

Way back in the 80s the aurora rumors started up then going into the 90s were a lot of "ufo" sightings of a black triangle craft flying high and fast a british engineer saw such a craft refueling from a stratotanker there were weird sonic booms in cali and other places and reports and pictures of donuts on a rope contrails that a pulse engine would produce, i dont believe its called "aurora" or at least not any more seems that name got tagged onto funding for the b2 bomber however i have zero doubt that there are and have been ongoing projects of craft that do take off and land on earth and ca... [More]

Since, the atmosphere ends at 61 miles and the B2 Bomber was capable of reaching 50,000 feet or 9.46 miles my previous mathematical calculations were inaccurate the B2 Bomber was not capable of reach space I certainly screwed up, dam! Yes, for a Aircraft using jet engines alone an Aircraft under normal circumstances would not be able to reach space do to the fuel used and the drag upon the airframe. However, if a jet engine was designed to using a non-standard fuel and build an Aircraft with a very very low drag Airframe it could possibly be accomplished. Now, one thing I am not aware of is ho... [More]

That’s cool, because Vietnamese is a laugh I no real experience with. Korean, German, English, Kurdish, and Arabic I can mostly hang in there except I am weak in Arabic. Thanks for the information.

Hey Bats I think many of the UFO sitings from about 1979 until 1989 the Lockheed F-117 Nighthawk Stealth Fighter if the siting occurred in the Western United States was certainly responsible. This is especially true if the siting was of a V or Triangle shaped object,

Yep, if one looks at groom lake area 51 test flights it lines up with alleged alien craft sightings.

Yes and the The Lockheed F-117 Nighthawk Stealth Fighter was designed and built at Groom Lake. That Aircraft was unveiled in 1989 and first used during Desert Storm. I saw a formation of three of during the Air War on approximately January 17, 1991 they flew directly over us and they almost were completely silent, they were flying at low altitude approximately 5 to 10 thousand feet that night headed I believe to attract Baghdad. The night was clear with a bright moon, and no where else in the world have I ever seen a more clear beautiful star filled sky. So, when they pasted over us I can abso... [More]

When the stealth fighter and bomber came out for desert storm the enemy had no clue we had such craft they were stunned and the stealth won that one.

Click here to view all 58 comments on this story