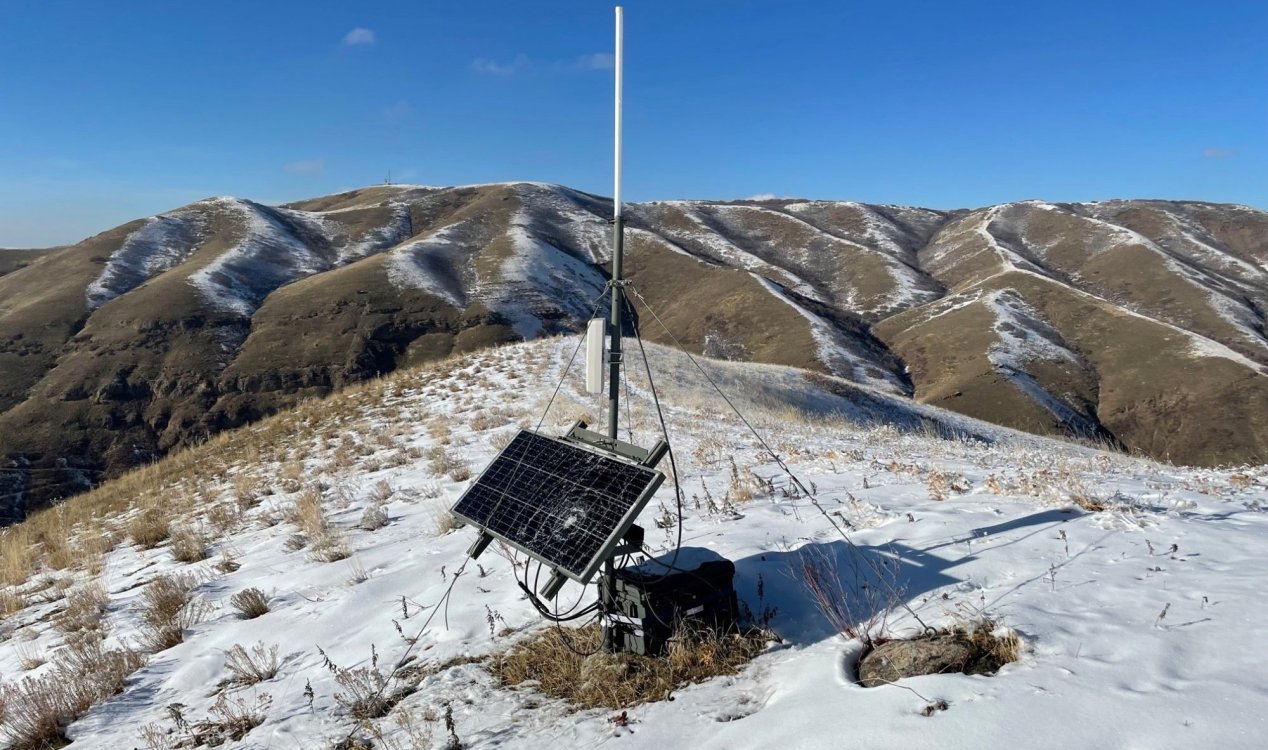 Who put this here and why ? Image Credit: Facebook / Salt Lake City Public Lands
Authorities have been left baffled by the appearance of several mystery antennas over the last couple of years.
Each antenna has been found with a solar panel and black battery box, but there has never been any indication of who placed it there or why.

The most recent one, which was found on a hill at an altitude of around 7,000ft, was taken down by officials on Wednesday.

"These towers have been bolted into different peaks and summits and ridges around the foothills," the city's recreational trails manager Tyler Fonarow told KSLTV."It started with one or two, and now it might be as much as a dozen."

The strangest thing is that nobody has yet been able to determine who is responsible.

Even the local university has expressed an interest in the mystery.

"Since Salt Lake City leaders alerted the University of Utah to the unauthorized solar panel towers in the foothills northeast of the Avenues neighborhood, University of Utah representatives have been actively coordinating with City Public Lands officials to determine whether any member of our campus community is connected to the towers," a spokesperson told KSLTV.

"As far as we know, the tower located on university property is not owned or operated by the university. We appreciate Salt Lake City's collaboration and dedicated efforts to identify the owners."

I can almost guarantee that it is commie china. they have been engaged in military observation forever and have all kinds of assets located around military bases to observe and obtain data. just like the FAA snafu that caused all the flight problems on 1-11-23 (today) we will probably never be told the truth about it.....if it was a program update file that was responsible, why did Canada's Flight system also go down when they are not connected to eachother? china folks. china. thats my bet.

if this was true then there would be records from some environmental department or such.

That entirely depends on who is paying for the study.  You are assuming it is a govt study.  It might not be.  Or it may be part of a govt study that hasn't been published yet.

possibly, but if they are being taken down then id wager im close to correct.

Dunno if my link worked so : https://finbold.com/utah-authorities-discover-mysterious-crypto-linked-antennas-in-the-mountains-searching-for-owners/

#12 Posted by LadyPhoenix 23 days ago

This isn't my area, so please excuse the question - what harm could the cause?  I mean, why remove them?  I'd say, set up cameras or something, and see what you capture.

Look, I'm never going to say that the CCP isn't as sus as F%$^.  Yes, Dugway Proving Ground is there at SLC too, as well as plenty of US high tech companies so there are research facilities worth spying on, no question, as well as 5 other military bases.  On the other hand, where goes the spies goes the counter-intelligence guys.  There should be a heightened FBI presence in the area, as well as the local "Wackenhut" variant going nuts.  I don't see that atm.  This doesn't mean your theory is wrong, but given the interest the FBI is paying to Chinese Nationals atm, if it were a Chinese operati... [More]

#14 Posted by qxcontinuum 22 days ago

If you let Chinese and Russians in your country what do you expect but danger...