Polar bears are considered to be a vulnerable species. Image Credit: CC BY-SA 3.0 Alan D. Wilson
The diminishing Arctic sea ice is making it almost impossible for polar bears to satisfy their energy needs.
The research, which was headed up by Anthony Pagano at the University of California Santa Cruz, involved measuring the metabolic rates of nine polar bears and fitting them with GPS-camera collars.

As the animals hunted for food over the following 8-12 days, the collars recorded video footage, metabolic data and GPS co-ordinates to provide an overall picture of their activities.The results showed that the animals had a higher metabolic rate than previous studies had suggested and that most of them were unable to catch enough food to meet their energy requirements.

A reduction in Arctic sea ice at a rate of around 14% per decade is chiefly responsible for their plight, as is the need for the animals to alter their hunting strategies depending on the season.

"It's thought that bears might catch a couple per month in the fall, compared to five to 10 per month in the spring and early summer," said Pagano. "We found that polar bears actually have much higher energy demands than predicted. They need to be catching a lot of seals."

#1 Posted by paperdyer 4 years ago

Not to be flippant, but if we moved some of the polar bears somehow to the South Pole, could they survive?  Would Penguins then be at risk?  Can we catch and dump fish for them?  They are beautiful animals and need our help to survive.  We need to preserve what we can.

#2 Posted by Likely Guy 4 years ago

Not with the south polar icecaps melting and it would decimate the penguin population because they've never seen a land predator.

#3 Posted by Piney 4 years ago

@third_eye  posted about this some time ago. This is nothing new.

It's not the same story - this one is about the findings of a new study published on Feb 2nd. 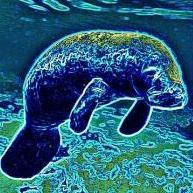 Hmmm...somehow I feel that this picture here might be more appropriate, don't you think?   link

#6 Posted by UFOwatcher 4 years ago

#7 Posted by DieChecker 4 years ago

I read it was not unusual for polar bears to be staving part of the year. The question is if they are starving for longer, or are even for starving during the normal time they starve. This study would seem to say yes, but I've seen a lot of bias on this issue, with people trying to argue for the bears entirely by pulling heartstrings. Others have noted that there are supposedly More Bears now then ever recorded before. So, then it may be a case of limited food, with an increase in predation, so then, again, there would be more starving.

#8 Posted by ChaosRose 4 years ago

This sucks.  It's just the tip of the iceberg, though. If there are icebergs left.

#9 Posted by preacherman76 4 years ago

If there are large numbers of bears who look like that, then maybe. For all we know this bear is equivalent to a 90 year old person. I saw a documentary couple years back making the same claims, but they couldn't seem to find any bears that looked unhealthy at all. Even as they told people the bears were starving to death. I remember even saying to myself, man you think they would have found some unhealthy looking bears to make this point. Nearly all big predators go through a hard part of the year. These people want to take complete control over all human activity. Power hungry thieves are wh... [More]

Bill Clinton talks about UFOs in 'Late S...
United States and the Americas