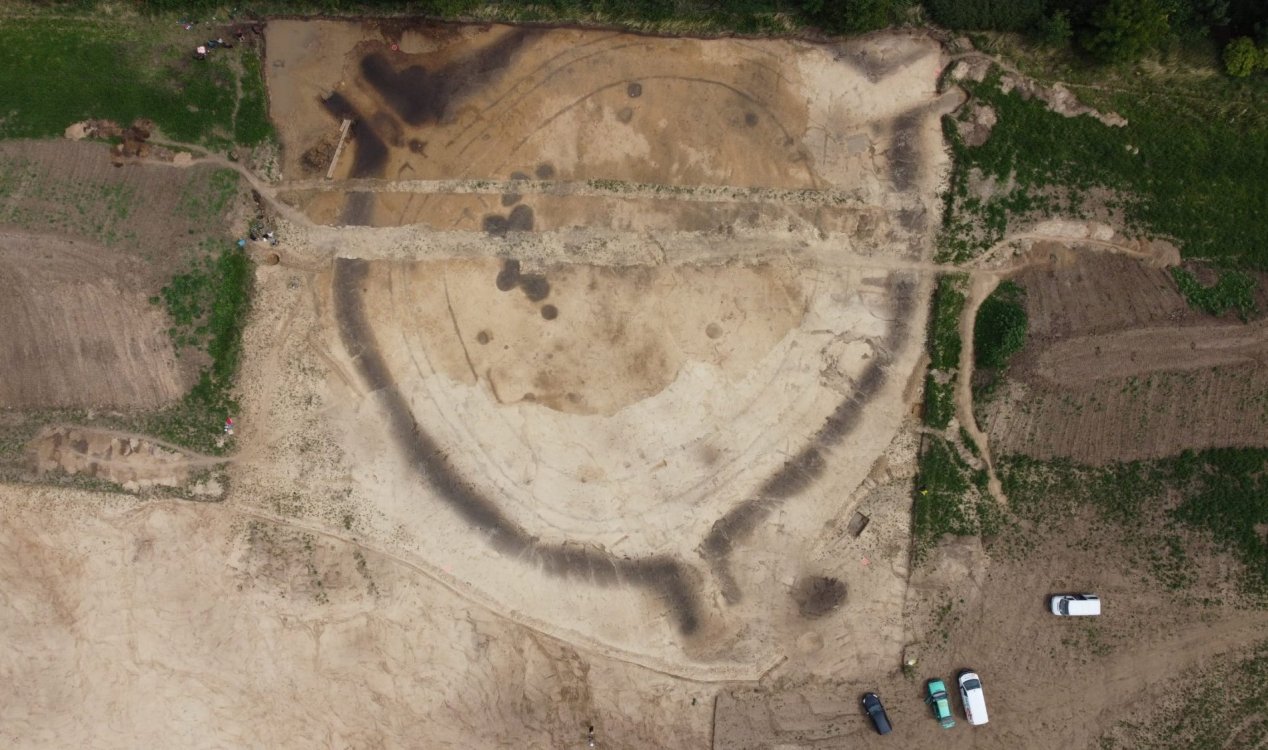 Image Credit: Institute of Archaeology of the Czech Academy of Sciences
Archaeologists believe that the mysterious structure was built around 7,000 years ago.
Situated near Prague in the Czech Republic, this ancient structure was first discovered by construction workers back in the 1980s, but it was not until relatively recently that its full significance was realized.

Known as the Vinor roundel, the building was circular in shape and around 180 ft in diameter.

It isn't clear what it was used for, but it has been speculated that local farming communities may have once gathered there and it was thought to be linked to a Neolithic settlement situated nearby.

The most startling thing about it, though, is its age - archaeologists now believe that it dates back as much as 7,000 years to the time of the Stroked Pottery culture which existed in Europe between 4900 BCE and 4400 BCE.

This means that it not only predates the Egyptian pyramids, but Stonehenge as well."Roundels are the oldest evidence of architecture in the whole of Europe," said Jaroslav Ridky, a spokesperson for the Institute of Archaeology of the Czech Academy of Sciences (IAP).

Little is actually known about the nature and purpose of these structures other than that they likely served as some sort of communal gathering place.

Their size was also impressive - especially given that the people who built them only had access to primitive stone tools.

Around 4600 BCE, however, evidence of roundels disappeared from the archaeological record and it remains unclear why the people of the time stopped building them.

It is hoped that further analysis of the Vinor roundel will help to reveal more about how it was made and what the people of the time might have used it for.

Neolithic women were stronger than athletes
11-30-2017

#1 Posted by Ozymandias 4 days ago

Newgrange in Ireland is older than either the Egyptian pyramids or Stonehenge, and, as gfar as I know, is the oldest astronomically aligned man-made structure in Europe.

#2 Posted by jethrofloyd 3 days ago

It is assumed this is how it looked in reality.

#3 Posted by Abramelin 1 day ago

https://en.m.wikipedia.org/wiki/Almendres_Cromlech The construction of these structures dates back to the 6th millennium BC. They were rediscovered in 1966 by Henrique Leonor Pina, who was carrying out field work relating to the country's geological charts.[1][3][4][5] The excavation of the site unearthed a series of both megalithic and neolithic construction phases; Almendres I 6000 BC (Early Neolithic), Almendres II 5000 BC (Middle Neolithic), and Almendres III 4000 BC (Late Neolithic). The relative chronology of the cromlech and menhirs is extremely complex and covers a period from the Neol... [More]

Saudi woman jailed for 45 years for soci...
Extraterrestrial Life and The UFO Phenomenon

We can find alien life within 25 years, ...
UK and Europe