Viking 'end of the world' is now imminent

The end is nigh ( again ). Image Credit: CC BY-SA 3.0 Ardfern
According to experts at the Jorvik Viking Center, the apocalyptic 'Ragnarok' will soon be upon us.
Norse legend tells of Ragnarok as a cataclysmic series of events that include a great battle, untold devastation wrought by natural disasters and the submerging of the whole world in water.According to the myth, Ragnarok will take place following three freezing winters with no summers between them, a condition that some believe has been met thanks to poor weather in northern Europe. Viking festival organizers also claim that the god Heimdallr blew the mythical Gjallerhorn on November 15th last year, signalling the beginning of a 100 day countdown that ends tomorrow on February 22nd.

"Ragnarok is the ultimate landmark in Viking mythology, when the gods fall and die, so this really is an event that should not be underestimated," said the festival director.

<< Previous story
Heart attack victim: 'there is an afterlife'

#235 Posted by Wordless Wanderer 9 years ago 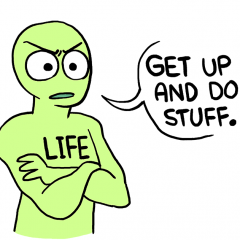 I spent Ragnarok puking my guts out because of some bad prawns. Don't know about the world, but my stomach did go through a Ragnarok.

#236 Posted by perceptivedoor 9 years ago

It must have been the WRONG horn..the real one has yet to be revealed

#237 Posted by DieChecker 9 years ago

It must have been the WRONG horn..the real one has yet to be revealed Probably one of the apparently hundreds of secret societies the Conspiricy people go on about has it.

#238 Posted by perceptivedoor 9 years ago

Probably one of the apparently hundreds of secret societies the Conspiricy people go on about has it. Could be true!

All these end of the world predictions by people who died out years ago! How many Mayans or Vikings do you see around today? no signs of them predicting their own demise. technically they never died out they just got land and I guess settled

technically they never died out they just got land and I guess settled I actually see lots of Vikings and Mayans, though none locally. They haven't died out at all, they've just.... Nevermind, I'm just repeating what you said. Sorry.

Funny, how ALL the doomsday predictions evaporate into the nothingness from which they sprang !

Funny, how ALL the doomsday predictions evaporate into the nothingness from which they sprang ! Oh come on ... this one at least was fun.... (you did throw a Ragnarok party didn't you? I did!)...

Oh come on ... this one at least was fun.... (you did throw a Ragnarok party didn't you? I did!)... Of course it's all fun, I was just poking a stick into the belly of those who take their dooms-day predictions oh so seriously.

By the way, what is the next doomsday prediction? I haven't heard anything on History Channel, and that's where I get most of my doomsday news from.

Click here to view all 244 comments on this story