Is there an undiscovered primate roaming the wilds of North America ? Image Credit: sxc.hu
Experienced tracker Christopher Bauer followed a set of large footprints for miles across North Dakota.
The incident occurred near Ellendale, Dickey County at Christmas after a family friend of Bauer reported seeing a large creature out of her kitchen window.

"She described him as a huge, hairy, ugly monster and I guess that kind of describes it, if a Sasquatch is looking through the window at you, that's how I'd describe him, too," he said.

Bauer set off to track the creature through the snow but soon found that its footprints, which measured 18 by 8 inches, went on for more than seven miles."Picked up the trail down that way about 20-yards in, right in the open and then crossed the highway and made his way to the hills, I think," he said. "He has a four foot stride and when he hits, he makes a deep impression. So it really wasn't hard to track him, it really wasn't."

Sadly though, despite following the trail for miles, Bauer ultimately failed to locate his quarry.

A local news report with footage and photographs can be viewed - here.

Sasquatch seems to me like more of a snot rocket shooter than a nose picker, but yea, maybe. But I'm inclined to go with the actual tracker's opinion on the matter, which was that it was possibly searching out a small animal to eat.

Do they ever tell the truth to the best of their ability?

A great many do just that, they sincerely tell the truth to the very best of their ability, and will be personally offended at even the hint that they are not doing so. In an unrelated note, a great many humans also have a lot of trouble admitting human fallacies to themselves.

there is no bigfoot, except for vague videos , photos, there is no real evidence  for a supposed 7 foot monster roaming the woods, how has there been no real evidence.   Eyewitness testimony is not good enough, most of the people claiming to see anything are crazy kooks looking for attention.

Oh my lord. I've had some drunken fun in the snow before but... to wander in the woods as a bigfoot lark never occurred to me. That's just silly. It's one thing to lark your friends, but another to randomly wander in the woods alone hoping someone will catch it. Too dang cold for that for me, lol. Thanks for the update

#199 Posted by Carnoferox 6 years ago

I would say I am surprised, but then I would be lying.

It would be helpful if whoever wrote that anonymous letter would come forward, if nothing else it should stop the guy from believing the prints were made by Bigfoot. 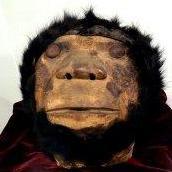 I'd like to get a forensic artist in there to sketch the face that woman saw.

Click here to view all 202 comments on this story