What the heck is this thing ? Image Credit: Facebook / Bex Deen / ViralVideoUK
Footage showing a weird creature wriggling around on the floor has gone viral after being uploaded online.
The disgusting five-inch-long critter was filmed by Bex Deen in Southampton, England.

"Found this slithering round in my porch," she wrote. "Feel like I'm in an episode of Stranger Things."

It turns out that this rather peculiar creepy-crawly is actually an insect known as a rat-tailed maggot. It is the larval stage of a type of hoverfly that resembles a honey bee when it is fully matured.

What makes this one particularly unusual is its large size - most only grow to around 2 inches.

The long 'tail' is actually a tube that the creature uses to breath while submerged in water.

#11 Posted by schizoidwoman 4 years ago

What a chubby fellow!

#12 Posted by DirtyDocMartens 4 years ago

That's what she said.

#13 Posted by pallidin 4 years ago

#15 Posted by freetoroam 4 years ago

Hey peeps, so its ugly and slimey, but there are uglier and slimier  humans.  Anyway, here they are ( the rat tailed maggot / drone fly)...not the human.

#16 Posted by ChaosRose 4 years ago

Geez...where does she live? Chernobyl?

#17 Posted by Legendarren 4 years ago 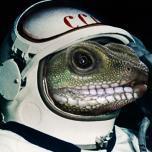 Definitely a caterpillar of some sort. You can tell by the way it moves.

#19 Posted by little_dreamer 4 years ago

"rat-tailed maggot" - Thanks, I needed a new way to curse someone.

#20 Posted by :PsYKoTiC:BeHAvIoR: 4 years ago

It almost appears as if the caterpillar got out of its cocoon, but the shell of it got stuck in the end, making it look like it has a tail.

What is actually being seen when someone...

True Witchcraft requires the use of Spir...
United States and the Americas