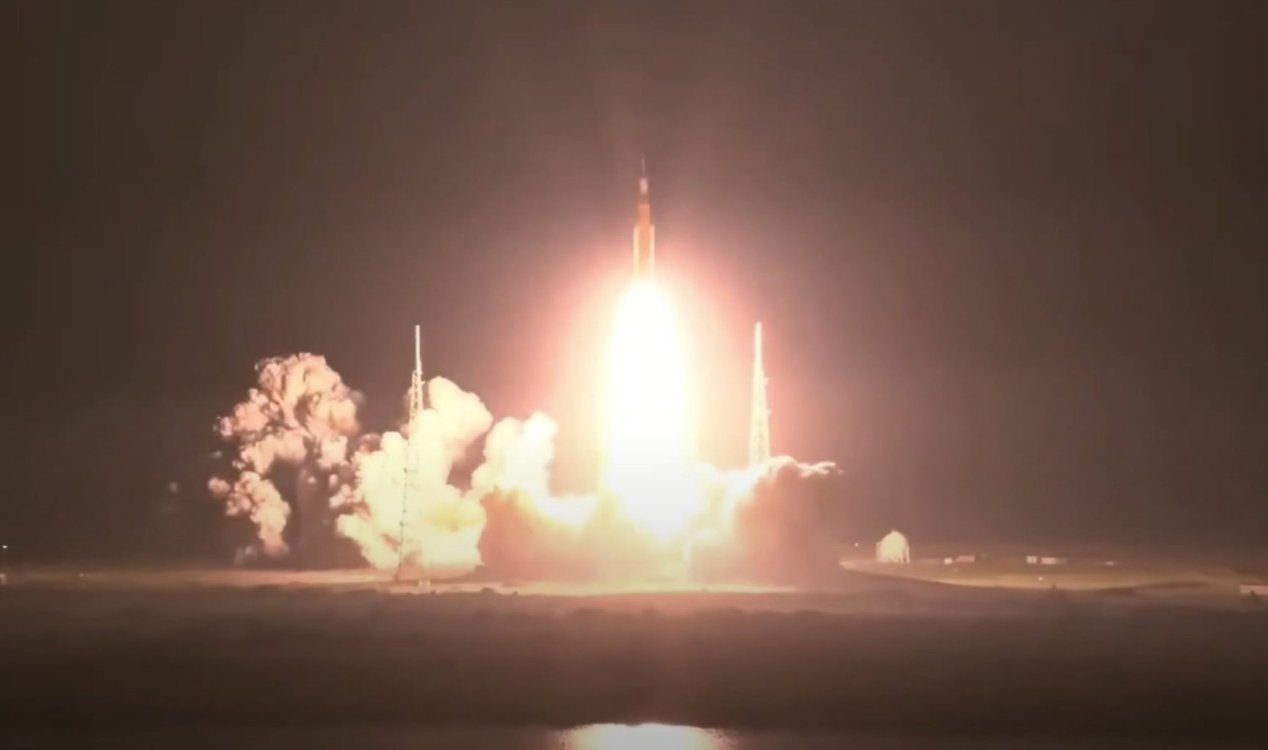 The launch was nothing if not spectacular. Image Credit: NASA
After several scuppered launch attempts, the most powerful rocket in history has finally departed on its maiden voyage.
The combination of NASA's Space Launch System (SLS) and Orion capsule soared into the night sky from Kennedy Space Center, Florida early this morning on its first ever mission to the Moon.

The launch itself provided a breathtaking spectacle as the enormous rocket - the most powerful ever built - lit up the gloom as it soared into the heavens, a testament to the ingenuity, skill and perseverance of the scientists and engineers who designed and built it.

Artemis I isn't carrying any astronauts, instead serving as a trial run for a manned mission in the future.It is, however, equipped with an array of monitoring instruments and experiments which will be carried on a 25-day, 1.3-million-mile trip all the way to the Moon and back.

As things stand, the first actual attempt to land humans on the lunar surface will not be until 2025, although this is likely to be pushed back at least a year due to all the delays.

"Liftoff!! @NASA_Artemis is on its way to the Moon!" NASA administrator Bill Nelson wrote on Twitter.

"Congratulations to the amazing team that has gotten us to this moment. GO ARTEMIS!"

DAMNIT!!! It WOULD BE CLOUDY here today    If it were clear, we could see the launch even from this far away

#2 Posted by esoteric_toad 18 days ago

Didn't watch it launch but I did hear it. It wasn't as loud as I thought it would be. Then again I am about 15 miles from the launch site.

Hopefully get some nice onboard video when it reaches the moon.

#5 Posted by Still Waters 15 days ago

NASA Moon mission 'exceeding' expectaions On the third day after lifting off from Florida bound for the Moon, the Orion spacecraft is "exceeding performance expectations," NASA officials said on Friday. Orion is already some 200,000 miles (320,000 kilometers) from Earth and preparing to perform the first of four main thrusts scheduled during the mission using its engines. This maneuver, which will take place early Monday morning, will bring the spacecraft as close as 80 miles (130 kilometers) from the lunar surface, in order to take advantage of the Moon's gravitational force. https://phys.org... [More]

#6 Posted by Still Waters 13 days ago

Nasa's Artemis spacecraft has arrived at the Moon. The Orion capsule swept 130km (80 miles) above the lunar surface, and it will now begin to enter a larger orbit. The vehicle was out of contact for 34 minutes during this manoeuvre, which began at 12:44 GMT, as it took place on the far side of the Moon. As the signal returned, the spacecraft sent back an image of the Earth. Nasa says so far the mission has "exceeded expectations" since last week's launch. https://www.bbc.co.uk/news/science-environment-63697714

#7 Posted by qxcontinuum 10 days ago

Allegedly 60 years ago NASA has landed people on the moon and so allegedly they walk there with with a technology that is equivalent of a dish washer. The moon should have been crowded with space tourists by now,  but surprisingly isn't. Furthermore to this day no nation including NASA has sent manned missions to the moon . Strange isn't it?