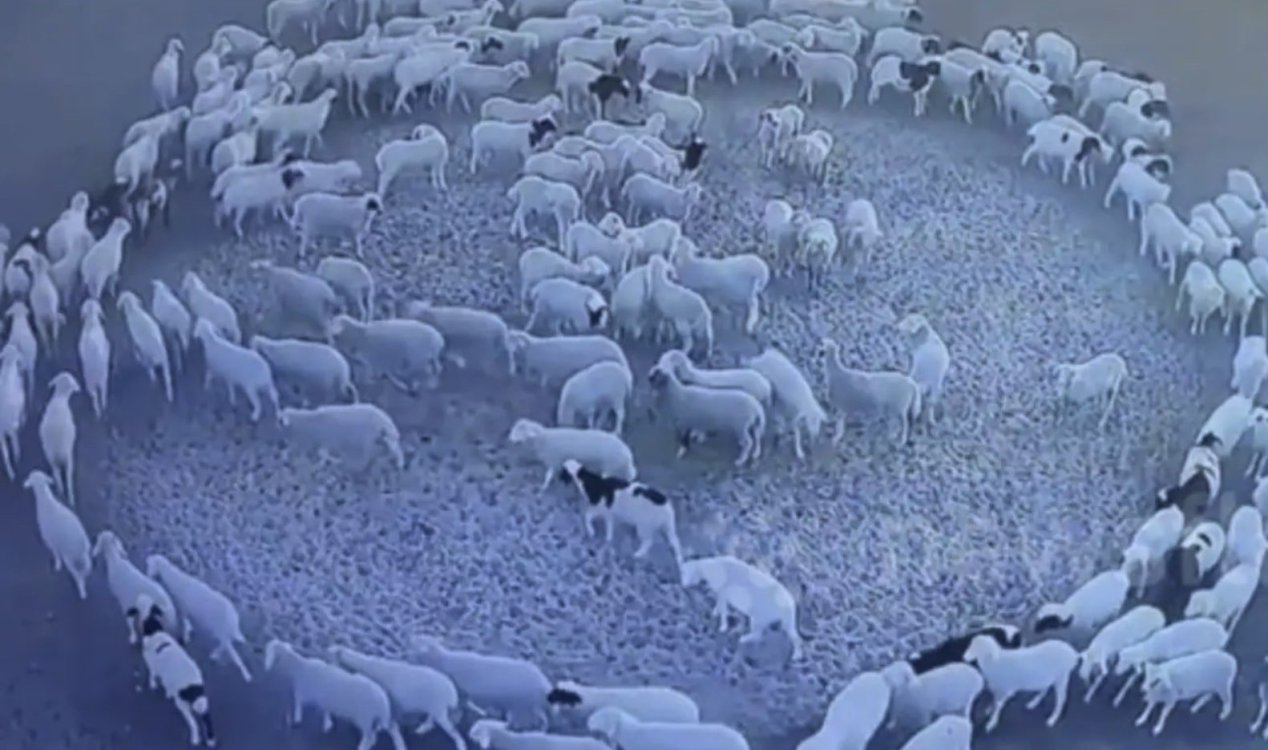 Why are these sheep walking in circles ? Image Credit: Facebook / YouTube
Viral footage from China shows the farm animals continuously circling the same spot for no apparent reason.
According to the owner of the sheep - Ms Miao - only a small handful of the animals had exhibited this unusual behavior to begin with, but it wasn't long until the rest of the flock had decided to join in.

While the farm animals' constant circular pacing seemed nothing particularly unusual initially, Miao was left scratching her head when they continued to do it non-stop for 12 days straight.

Even stranger was the fact that, on a farm with 24 sheep pens, the sheep in this particular pen (number 13) were the only ones affected.As it happens, however, the explanation for this phenomenon is likely to be rather mundane.

Listeriosis - a disease typically associated with spoiled sheep food - is known to cause inflammation on one side of the brain, resulting in disorientation and a tendency to walk around in circles.

In all likelihood, this is what is afflicting the sheep in this particular case.

#22 Posted by jethrofloyd 14 days ago

Sheep in East Sussex caused a similar stir last year when they were spotted standing in concentric circles.

They are eating pellets sprayed out by an automatic feeder.

#24 Posted by jethrofloyd 14 days ago

Yes I know, I read it in the article.

Or....aliens mistook them for crops.

While further testing would be needed, one should not discount the possibility of bacterial Listeriosis infections in this and some other reported events: https://cattletoday.info/listerosis.htm http://www.infovets.com/books/smrm/F/F475.htm Edit: Typo.

You can have a moderator do that for you if you "Report" your own post and explain why.

#30 Posted by jethrofloyd 5 days ago

You were almost right @ouija ouija. Scientist Claims Mystery Behind Sheep Walking In Circle In China Solved Sheep exhibit flock mentality, which mean they move along with the herd, protecting an individual animal from predators. A scientist claimed to have solved the mystery behind an eerie footage of a huge flock of sheep walking in a circle for 12 straight days in China. The video, posted on Twitter earlier this month, had baffled people across the globe. The footage was posted by Chinese state-run outlet People's Daily and shows dozens of sheep walking clockwise in a nearly perfect circle o... [More]

All the more intriguing that sheep in other pens on the same farm didn't exhibit the same behaviour.