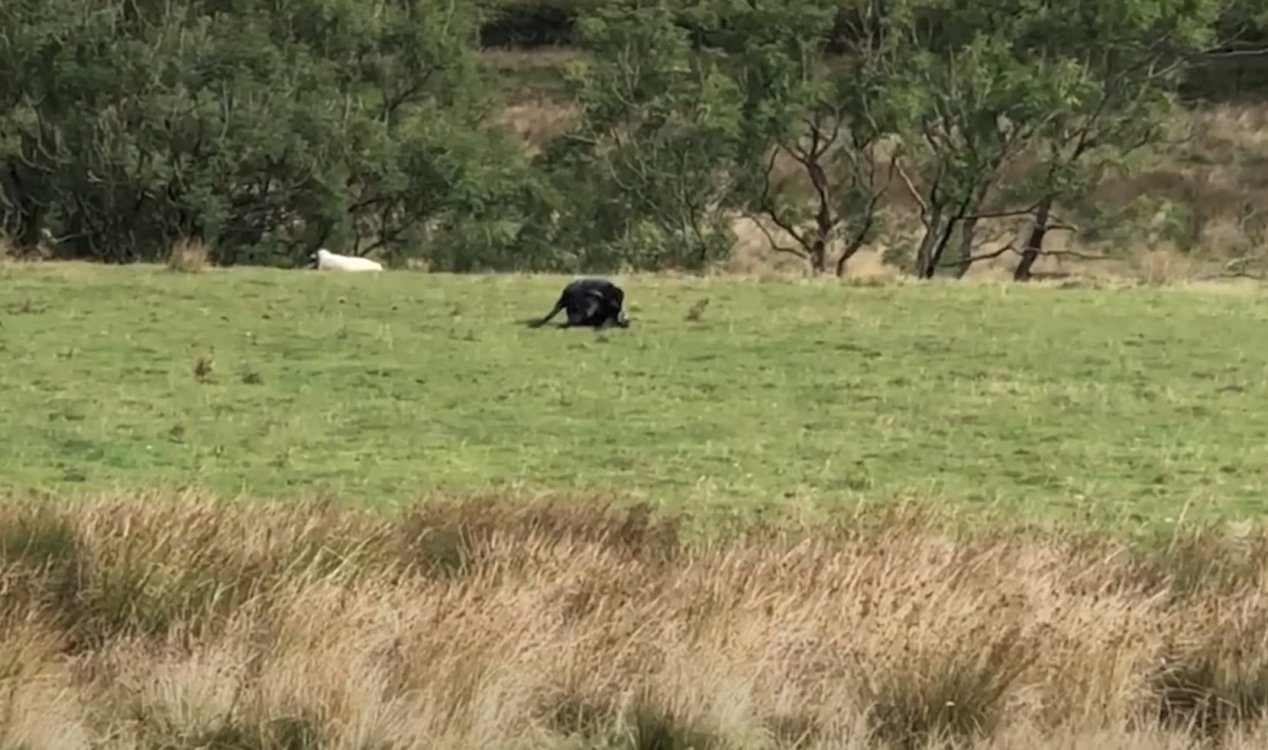 Is this a panther, or something else ? Image Credit: YouTube / SWNS / Josh Williams
The footage, which reportedly shows an exotic black cat, has generated some heated debate since appearing online.
According to reports, 17-year-old Josh Williams had been out wild camping with a friend in the Peak District when they spotted something unexpected in a nearby field.

Grabbing his phone, he began recording what he believed to be a large black cat - possibly a panther.

As they watched, it became apparent that the animal was feeding on what looked like a sheep carcass.

"We were both confused when we first saw it," he said.

"We stood staring at it and questioning what it could be for around five minutes before I decided to start recording so that I could zoom in and get a better look.""We tried attracting its attention so that it would turn and face us, so that we could get a better understanding of what we were looking at."

"We honestly had no idea what it could be if not a big cat."

But does this footage really show a black panther feeding on a farm animal in the British countryside ?

As it stands, it's quite difficult to make out exactly what is in the video. The fact that the clip is so short and doesn't show the animal walking away afterwards doesn't help matters either.

Some argue that the video could be an optical illusion and that the 'panther' is in fact a cow sitting down.

You can check out the footage for yourself below - what do you think ?

Next story >>
Do the laws of physics prevent us from having genuine free will ?
Recent comments on this story

I actually think  you are right.   I watched it with a large magnifying glass over and over...what looks like horns is actually the dogs leg.

#29 Posted by openozy 2 months ago

Yeah the angle it's leg is, as they have when fleaing themselves. Also it's too thin to be a cows leg in comparison to the body. I did think it may be a cow at first but not a cat.

#31 Posted by openozy 2 months ago

Maybe a cross Neo or other mastiff, It is hard to see.Those Neo's are good crossed with pits, called bandogs.

I didn’t realize my picture failed.  Damn.  That was supposed to be a black mastiff.

#33 Posted by openozy 2 months ago

I don't know a lot about anything really but I've always been fascinated with animals, dogs in particular and have always had at least 6 at a time, sometimes 12, lol. At least I didn't think it was paranormal, for a change, lol.

#34 Posted by openozy 2 months ago

#35 Posted by MissJatti 2 months ago

A cow sittng down eating a sheep carcus!?

#36 Posted by ExoPaul 2 months ago

Once you get your head around it, it becomes obvious what it is.  It is a black sheep, facing towards the camera, but is leaning back to nibble its back legs/bottom as it has an itch, and the two front legs are propping it up as it reaches his head back to have the itch. (attached a photo of a dog doing it in the exact same position/angle I believe the sheep is in, during the video clip).  And the fact there are other sheep laying down in the same field and not too far from it suggests that they are not distressed, which rules out a predator such as any cat, dog or other type of animal.  It is... [More]