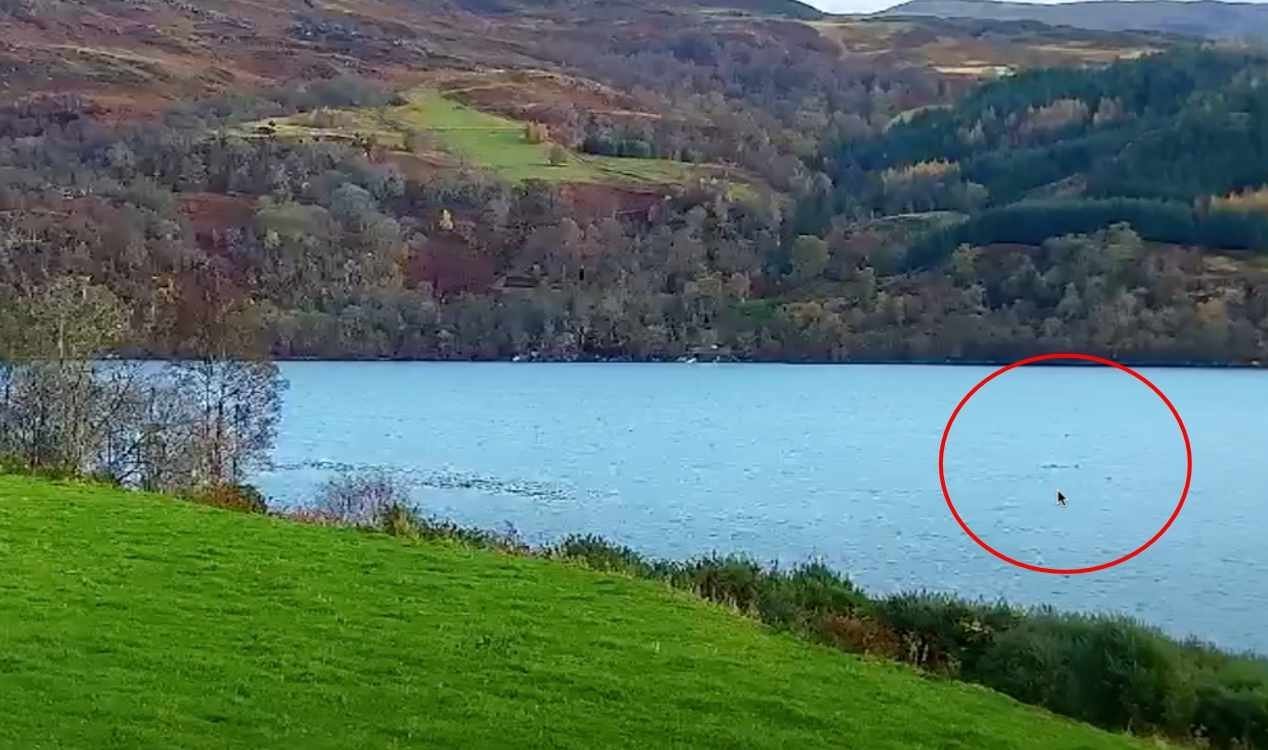 A mouse cursor follows the 'creature' in the video (see below). Image Credit: YouTube / Eoin Fagan
A veteran Loch Ness Monster hunter has spotted something unusual moving through the waters of Scotland's famous loch.
58-year-old Eoin O'Faodhagain, who is certainly no stranger to hunting Nessie given that he has reported several sightings over the years, had been monitoring the live feed from the Visit Inverness Loch Ness (VILN) webcam near Fort Augustus when he spotted something moving in the water.

"I noticed a splash and movement on the screen coming into view on the right, and a long black shape, and I immediately started a screen recording of this object," he said.

"I got excited because it remained on the surface of the water, moving very slowly, unlike a large fish that would leap out of the water, but would then submerge."

"This object was no fish, or a log for that matter - it was moving in a controlled speed, slow, unlike a log which would be moving with the current.""I believe it is a live creature."

The footage, which can be viewed below, certainly shows something in the water, but it is difficult to discern exactly what it could be.

The sighting is the 7th this year, with the last one being back in October.

"I believe in the Loch Ness Monster after witnessing a live sighting in July 1987," said Eoin.

"I think my video and photos on Saturday have proven the existence of the monster, and brought her from folklore to reality."

#9 Posted by MysteryMike 8 days ago

Log, wave or a seal. Move along. Nothing to see here.

#10 Posted by DieChecker 8 days ago

Log, log, log, log.......... Way too slow for most anything else. Appears the wind is blowing right to left, maybe at a few km per hour, which coincidentally is the direction this "monster" was slowly floating. Assuming it is 10 feet long. Then it traveled a total of about 200 feet in 10 minutes. That's about 0.25 miles per hour.

#12 Posted by stereologist 7 days ago

I wonder if it is flotsam or jetsam? https://en.wikipedia.org/wiki/Flotsam,_jetsam,_lagan_and_derelict

#13 Posted by jethrofloyd 7 days ago

I love the Loch Ness monster mystery, but this is starting to be ridiculous.

#14 Posted by tortugabob 6 days ago

Let's see. I'm 58 years old and I've searched for Nessie for decades. I've got a tripod to keep my camera steady. To bad I'm such a cheapskate that when I send my videos to YouTube nobody can see ****.

It's those pesky eels again.

#16 Posted by DieChecker 5 days ago

I don't think the videos author intended to film the log. He likely reviewed many days of footage and the best thing he had was a log VERY SLOWLY floating by. So he posted it. YouTube accounts need content, and a log is better then no video at all.

#17 Posted by Davros of Skaro 4 days ago

Are you kidding me? That's the best evidence to date. LOL!