Attenborough: 'of course Nessie is a hoax'

Sir David is less than impressed with the notion that Nessie exists. Image Credit: CC 3.0 Mike Dixson
The legendary naturalist recently made his feelings about the famous monster very clear in a handwritten note.
Anyone who has ever gazed out over the waters of the enigmatic Scottish loch will have likely wondered whether its famous denizen, the Loch Ness Monster, lurks in the darkness below.

One such person is Rick Wilson, author of a new book entitled 'Scotland's Greatest Mysteries.'

While conducting research for the book, Wilson had decided to contact TV naturalist Sir David Attenborough to ask his opinion on the existence of the enigmatic creature.

"When I started thinking about the book, I began researching some of the prominent people who have believed in Nessie in the past," he said. "Those people include Sir Peter Scott, who was a TV presenter and naturalist long before Sir David Attenborough.""They were contemporaries and I'd imagine quite pally. I wanted to check if Sir David held the same views so dropped him a handwritten note. Not in a million years did I imagine he'd respond but within days I got this handwritten note back from him."

The note, which was penned in blue ink, reads simply - "Of course the Nessie story is a hoax."

The results of a recent study into the biology of Loch Ness suggested that the most likely explanation for the monster legend was a large eel.

A recent video also shows what looks like a giant eel-like creature swimming in the River Ness.

The problem with trying to determine what Nessie is is there's a good chance it's not just one thing. The whole thing started as a hoax and I'm sure it's been hoaxed many times over the years but I'm pretty sure other Nessie sightings probably have been otters, seals, swimmers, logs, waves, giant eels, wishful thinking and downright fabrications - in fact just about the only thing I'm sure it isn't is a dinosaur with a knack for hide and seek.. But the story has transcended to legend to the point where even if we drained the Loch I dont see it going away any time soon

#8 Posted by Don Caesar 3 years ago 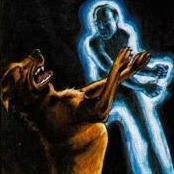 Even if Mr. Attenborough was a believer, I doubt he would say so.

Really - what can this old dinosaur possibly know about old dinosaurs?  A "hand-written note" in the 21st century?  Seriously man, I don't trust anyone who can still read and write.  And what sort of made-up name is "David" anyway?  It's obviously a palindromic acronym for something sinister.  AND that surname is obviously fake - the real Attenborough is a beautiful nature reserve in Nottinghamshire1. So who is this bloke, and what is his evil motive in trying to conceal the Loch Ness monsters2? After conducting literally no research I remembered that Roxburgh Castle is also in Scotland, and t... [More]

Old David has turned into a spoiler,It's alright for him as he's on the way out.Probably told his great grandkids there's no Santa too,miserable old skep.

#11 Posted by Alchopwn 3 years ago

Nessie has been many things over the years...  Abnormal wave patterns, logs caught in the current, a school of otters, giant eels, a circus elephant, a dinosaur ghost, and maybe even a plesiosaurus.

I know right? Poor kids - they get to have the same number of presents, appreciate the generosity of the people giving the gifts rather than an imaginary fat man and don't get the enjoyment of finding out he's not real and they've been lied to their whole childhood I guess it turns out there is a monster after all.. /sarcasm

Yeah you, by the sounds of it

#14 Posted by RoofGardener 3 years ago

Umm... Rosslyn Chapel IS in Scotland. It's in Rosslyn just south of Edinburgh.  At least.. that's what they WANT us to think !

Haha oh ok so Nessie's fair game but Santa is off the table - noted! (Disclaimer: as this is the internet where every message can be read as friendly joking or hostility in equal measure I'd just like to clarify the message was intended to be lighthearted - I'm pretty sure you got that already but you never know these days..) Not that I'd object too much to the monster tag, it doesn't seem to have done Nessie's reputation any harm..

Pelosi is going to Taiwan
UK and Europe