Could this be the Rendlesham Forest UFO ?

Is this the object encountered by Halt and his men at Rendlesham ? Image Credit: Email Submission
A UFO photograph has emerged that was taken near RAF Woodbridge on the night of December 24th, 1980.
The following was sent to us via e-mail (the sender wishes to remain anonymous.)


Back in 1980 my mum lived in Suffolk in the East of England. Late in the evening on December 24th 1980 (christmas eve) she had just finished making final preparations for Christmas day and went into the back garden to put some rubbish into the bin. Whilst in the back garden my mum saw 4 extremely bright glowing objects in the night sky, after observing the objects she went back inside and got her camera and took a couple of photographs, she then stood and watched the objects for roughly a further one minute before they all simply blinked out and vanished from sight.

My mum never told anyone about what she saw, she always kept it to herself. It was 3 years later when she read the newspaper article about UFO's witnessed by USAF military personnel in Rendlesham forest written in the News Of The World that she realized that what she saw and photographed 3 years earlier was probably and more than likely something to do with and connected to with what colonel Charles Halt and his men witnessed, my mum always thought that it was simply too much of a coincidence not to be related, and let's face it within hours of my mums sighting Halt and his men were running around the forest chasing UFO's. (Editor's note: Halt and his men didn't actually venture out into the woods until December 28th, a full four days later.)

My mum now lives in a care home and is suffering with Alzheimer's disease. As an individual who does not wish to speak out publicly regarding my mum's UFO sighting, debate the Rendlesham forest UFO incident with anyone, or speak to UFO researchers and UFO investigators, after much careful thought and consideration I have decided to release this photograph to a list of credible and seriously minded people and UFO organisations I have compiled so that it can be made available for research purposes and so that the photograph and my mum's UFO sighting can be made available to those who have an interest in the subject of Unidentified Flying Objects. This photograph which clearly shows the objects that my mum saw has never been seen by anyone except for a few close family members and this is the first time in over 40 years that my mum's story has ever been told. What ever the truth is regarding the now infamous Rendlesham forest UFO incident and what colonel Charles Halt and other USAF military personnel witnessed in Rendlesham forest all those years ago is, is at present still unknown and is still debated to this day. Whether the objects that Halt and his men witnessed were something natural, man made or possibly something even of an extraterrestrial origin as many have speculated, again is still yet unknown and is still debated to this day, and exactly the same can be said about the objects that my mum witnessed and photographed, however, one thing that I can say without a shadow of a doubt and with absolute certainty, is that what ever the objects were that my mum witnessed and photographed were, in no way, shape or form were they any kind of lighthouse beam. My mum's UFO sighting and photographic evidence may not provide any conclusive answers regarding the Rendlesham forest UFO incident, and might even be completely unconnected and have nothing to do with it, however, I believe it is a huge and extremely important piece of the puzzle and does indeed prove that Unidentified Flying Objects of a yet unknown origin were in fact present in the skies above Suffolk around the Christmas period of 1980.

My mum was never interested in the UFO subject, however, she did read about the Rendlesham forest case and was firmly convinced that what she saw was otherworldly, she was also of the mindset that both the American and British Government covered the whole thing up and know far more than everyone has been led to believe.

(Click on the image below to view at full size.) 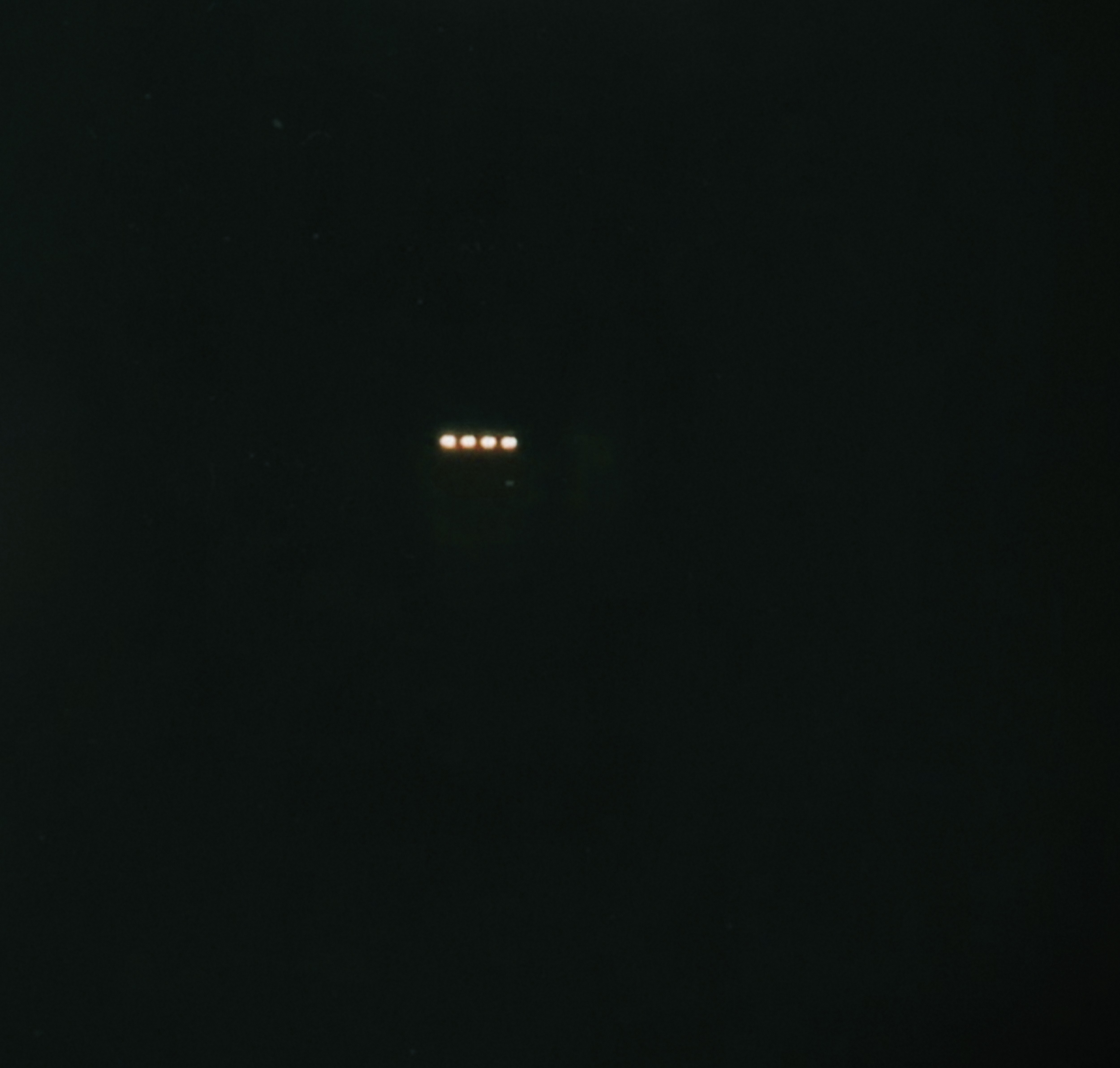 Another Rendlesham UFO photo has emerged
4-27-2021

<< Previous story
What happens if you die during a trip to Mars ?

#9 Posted by Dejarma 1 year ago

quoted from article: sorry, maybe this is a stupid question but who's us? This forum?

Kinda looks like the lights you'd get on top of a jeep or pickup but I'd have expected it to light up its surroundings or at least the cab.

The lights are not there for nothing...

Here, This one just stinks really badly,  perfect centered cropped nothing image of what, running lights on a redneck truck? The image means nothing we only have the highly questable story to go on. "anonymous" to me is a tell tale sign of hoax, then heart felt story of mum too incapacitated to be questioned, and why release it now after ren has been fairly well debunked? And Where did the guys from ren describe 4 white lights sitting there? After 40 years he still has perfect detail of moms account, which is great but we dont know who anyone is, so presenting the picture as he did really is a... [More]

#13 Posted by Hyperionxvii 1 year ago

The large image posted is almost square, if this is an indication of the original negative then it could have been taken with a medium format camera or more likely a 126 cartridge type film. If it was 35mm the frame has been cropped. The later type 126 film was used in simple point and shoot cameras with limited range of exposure. If the lights were bright enough it might be possible to get a photo but brightness would need to be within the exposure range of the cameras standard day time setting.  Another scan of the negative over exposing the lights might pull out more detail in the surroundi... [More]

Since going by the story is all you have what would you "guess" would be the most likely camera? Im a gearhead and the pic just screams to me truck lights, Years back before everything went LED rectangular running or fog lights were popular

There is nothing about the image to identify a particular make or model of camera, just the photo is near square and if it is reproduced here as it was originally recorded on film then its more likely to be the popular 126 ( 26x 26 mm) negative format. To add, I would agree it could be lights on a truck or farm machine. I would like to chat to the poster but it looks like that won't happen.

Hunter claims to have had Bigfoot in his...
Coronavirus (COVID-19) Pandemic