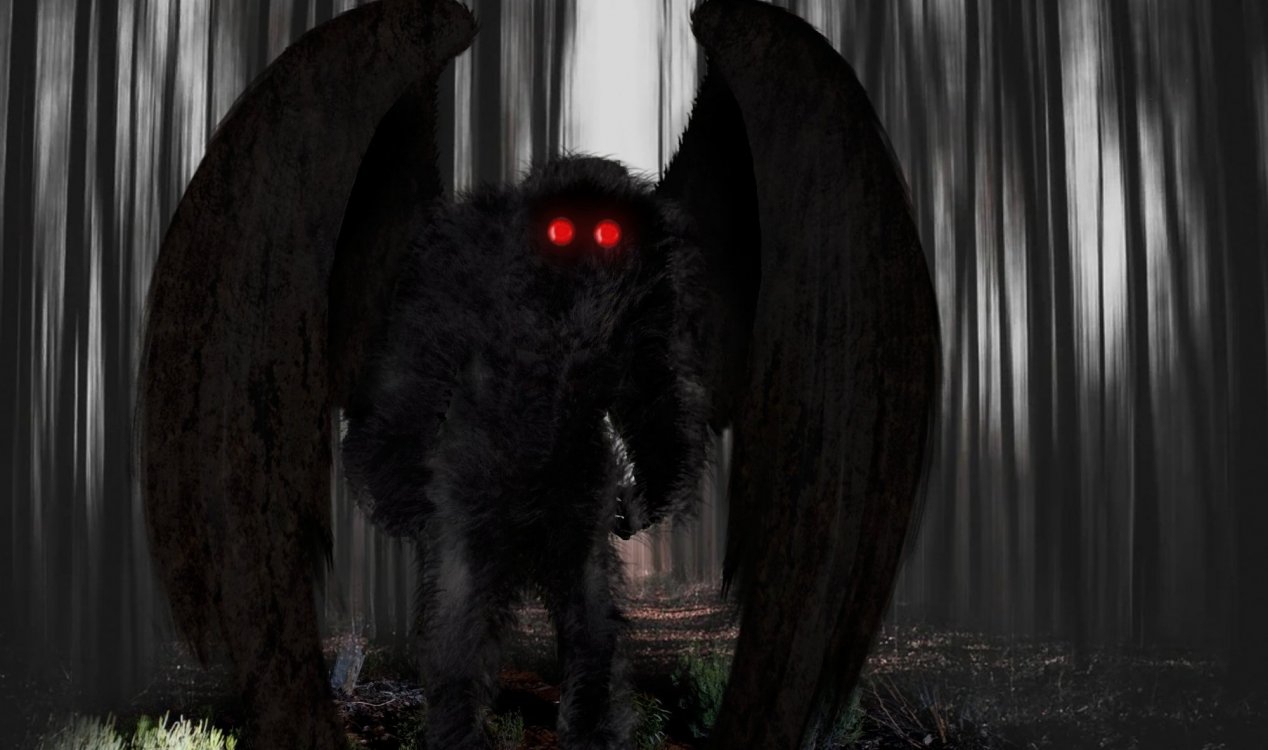 Was Mothman a real creature ? Image Credit: CC BY-SA 4.0 Tim Bertelink
Crowds of revelers are expected to descend on West Virginia this weekend to celebrate all things Mothman.
Described as a human-like entity with wings and glowing red eyes, the creature known as Mothman gained prominence after it was sighted multiple times in and around Point Pleasant, West Virginia from 1966 to 1967.

The first reported sighting occurred in November 1966 when five men who were digging a grave in a local cemetery described seeing a strange figure swooping over the trees overhead.

The creature was seen again only a few days later when two couples driving through the area encountered the terrifying spectacle of a human-like shape with glowing red eyes illuminated by their headlights.

As time went on, more and more people reported seeing the creature. When 46 people died in the collapse of the Silver Bridge in December 1967, Mothman came to be associated with the disaster.The phenomenon was later described by John Keel in his 1975 book The Mothman Prophecies which was itself turned into a movie starring Richard Gere in 2002.

The Mothman is also celebrated in Point Pleasant at a festival held each year in the town which typically features a range of activities, guest speakers, exhibits, competitions and more.

This year's festival is set to take place this weekend (Sept 17-18th).

You can check out some footage from one of the earlier festivals below.

Where I used to work on a property there were Powerful Owls, I'd spend ages watching them feeding their young with possums, rats and once saw them with a new born lamb. They are awesome and fearless birds but I wouldn't mistake them for a cryptid. I ended up getting sacked for bird watching, lol.

It's not insane. That is all rationally possible. It's 'outside the box' I'll grant you. I can't really read and listen to all the reports and odd claims and believe 'known species' or hoax either. So, considering 'outside the box' becomes a rational step. There we are then.

They must be powerful. Last month I videotaped some very creepy sounds outside my (2nd fl) window. Didnt think it was paranormal though very, very, unpleasant (clicking, followed by high pitched scream). Came from high up, tree branch (shaking). After some research, figured out it. An owl brought a damn rabbit (to top of tree). I suppose dinner time. Anyway, (off topic) oh man, feel bad for the rabbits in my yard.Ā Last week my neighbors cat, picked up a full grown rabbit, in mouth (I tried to stop him) and took off.

#22 Posted by ThereWeAreThen 6 days ago

It's not out of the box, it's out of the bloody mental asylum! You can use my initials if you like I won't tell.

You sound like your ancestors that recommended mine to the asylum for even speculating about a round earth.

#24 Posted by ThereWeAreThen 6 days ago

Thst was good fair play made me chuckle.

sigh Not my fault the kids sketch of MM looks like an angry owl Im not saying it was an owl the kids partying saw in fact they might not have seen anything and made it all up, This case is just very very weak there is zero evidence to support any of it and those who later jumped on the bandwagon each had a "version" of their MM including keel who never saw it but embellished claims. Ā Ā

Yeah they sit for ages in the one spot in the tree with their prey, a bit creepy. I actually catch rabbits as a part time job in Oz, they are an introduced pest here. It seems everything eats rabbits yet they can survive to plague proportions. I do like them like I do all animals and admire their resilience even though I hunt them.

#27 Posted by stereologist 5 days ago

Yes, believing channeled sources is insane. It has nothing to do with thinking 'outside the box'. It's about being incredibly foolishly gullible. Why? Because it is nothing but story telling. Accepting stories without corroborating evidence is just irrational.

#28 Posted by stereologist 5 days ago

You are not speculating about a round Earth. You believe in the nonsense spit out by someone that is a story teller who pretends to channel some other entity. That's just plain old ridiculous. When some joke tells a story trying thinking about what is stated. The idiotic story told is that some aliens can travel from galaxy to galaxy yet could not stop a rock from hitting their planet. Humans cannot travel from galaxy to galaxy or even get out far from the Earth yet humans are making plans to prevent impacts from "rocks". Plus there is the claim that the Earth is the closest planet that is sim... [More]