What is this creature ? (see larger image below) Image Credit: Email Submission
Allegedly captured five decades ago in the US, this photograph shows an unidentified creature in the trees.
A few days ago we received an e-mail from an individual (who wished to remain anonymous) whose late father had reportedly taken a photograph of a creature somewhere in the United States.

But is this really a 'Mothman' as the sender suggests or is there a more mundane explanation ?


"Sadly my father recently passed away, whilst sorting through his personal possessions and belongings I came across a photo album and amongst the photos I came across this photo. I asked my mum what she knew about the photo, she said all she knew was that my father took the photograph some time in the 1970's whilst on a vacation in America with a friend.

She remembered my father showing her the photo and telling her that he and his friend saw some sort of human sized bat/bird type creature clinging onto a tree, he said he took a photo and then the creature leapt from the tree and flew off into the wooded area, that's all he said, my mum said he never mentioned it again, my father was a very private man and was also a very religious man.

I asked my mum if his friend is still alive but she told me he passed away several years ago, so unfortunately no more knowledge or information can be gained about the photograph.

I scanned the photo into my computer to have a better look at it, bearing in mind it is a very old photograph some details can be seen when you zoom in on the dark object clinging onto the tree. What looks like a head with pointed ears, possibly 2 eyes, maybe a wing to the left and what looks like a leg to the right can be seen? Whatever it is it is most certainly very bizarre and very odd looking. I spent a bit of time looking on the internet and the closest thing I could find to what matches my fathers description is something called the Mothman."

It appears that the image has been taken from footage of a black bear climbing a tree.

Check out - this video - it is the exact same tree, so it's likely that the whole story is a hoax.

Thanks to Ross Withers for tracking down the original footage and providing the comparison shot (below). 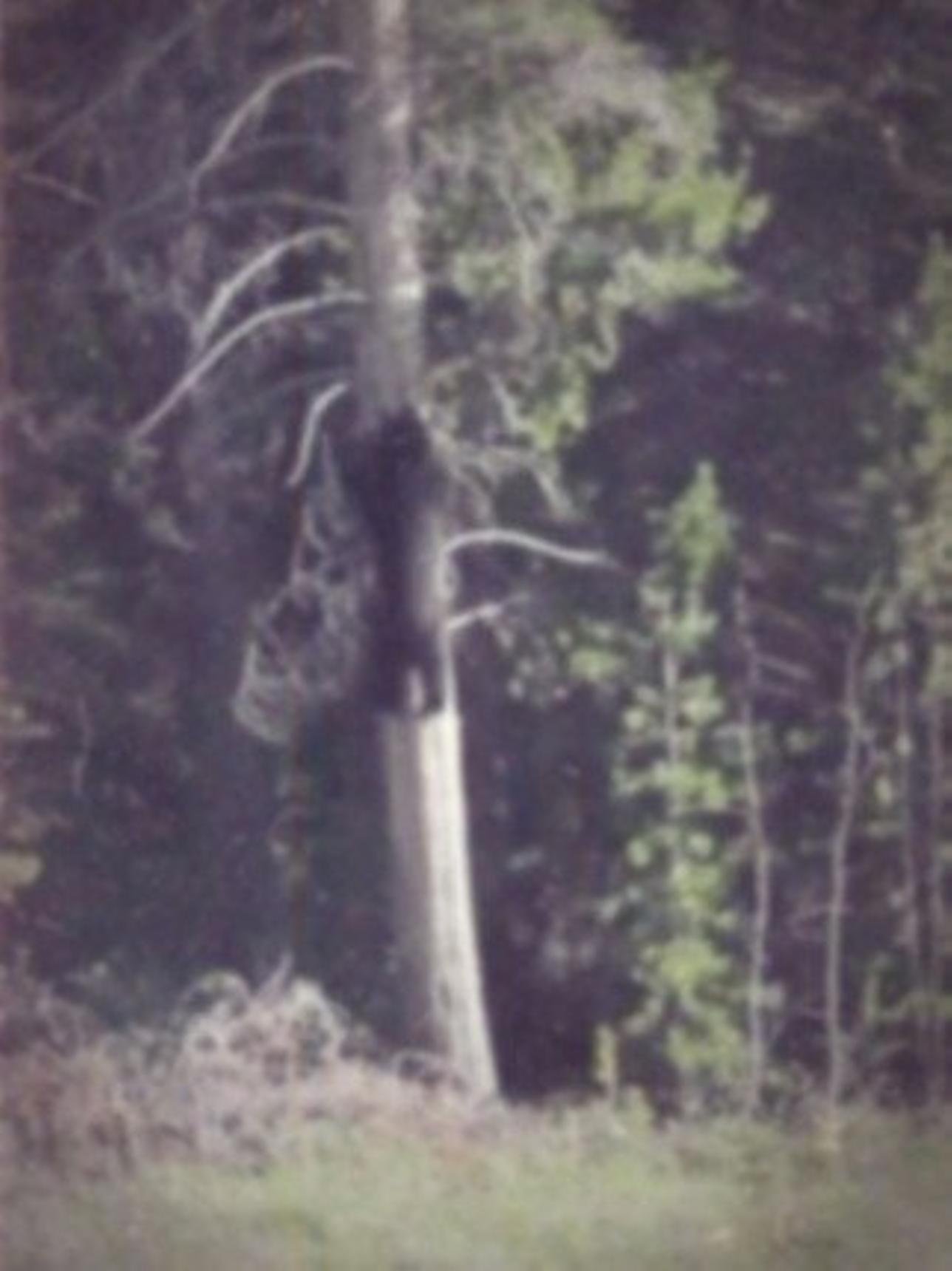 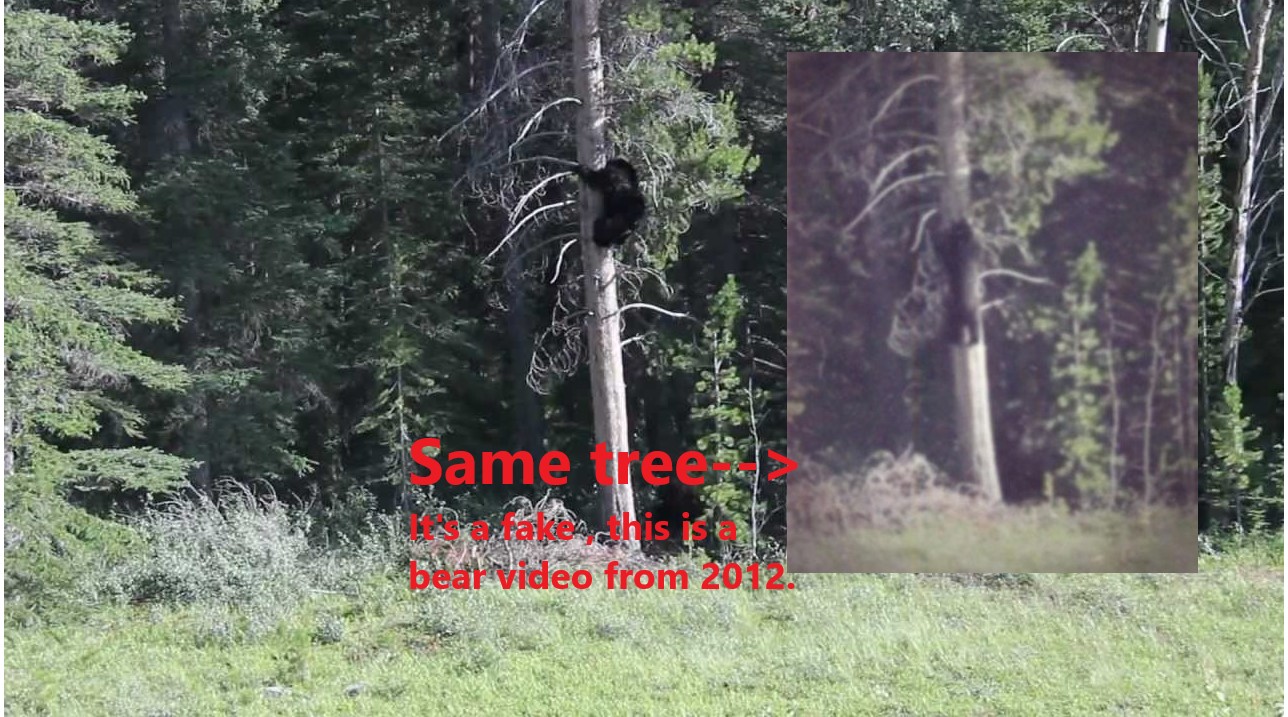 i'm old & get confused thanks mate

In PG’s defence, he does have a (vaguely and ill-defined to us) rubric for assessing the truthiness of phenomena, and he does reject some things based on that rubric.

#146 Posted by Hyperionxvii 2 years ago

"Some" lets be honest its very seldom that PGs cheese o meter does peg paranormal, Its fine its what he sincerely believes so i can respect that what i dont respect is anyone who makes a granduous claim as fact and refuses to support their claim, For example he side track a thread saying a dead kid channels mothman a dying alien race yet offers zero to collaborate such claims, he got eye rolls for true believers on that one.

Hmm... Most of the time I just see a bunch of semi-random percentages on the "Papometer" (Poopometer) that tend to favour a paranormal explanation (although not exclusively so). As I said, I normally bite my tongue, but saying that the mothmen are a dying alien race because some dead kid who's being channelled by a group of mediums "says so" is bonkers, even for him.

Pipe up all you want and we will continue to not see things the same way. I consider my judgments to be properly balanced which is by definition why they are my judgments.

Channeling Erik would be a complete tangent to this thread. Do we go there with everything I mention.  Do you get that I can not show you physical proof of what is beyond physical? If you require physical proof why don't you know to ignore me by now? I've mentioned multiple times that I respect the Erik source from the mother's testimony and my and other people's experiences. So Erik tells us what he knows about Mothman and that would of course be nothing I can physically substantiate for you. I am free to share that view of Mothman in this thread as food for thought to others. Nothing wrong w... [More]

Why bonkers? I've given this source serious consideration and what he says is believable. Any explanations for any paranormal/crypto/alien stuff is probably going to get called bonkers by the more narrow thinking. Oh well.

Click here to view all 153 comments on this story