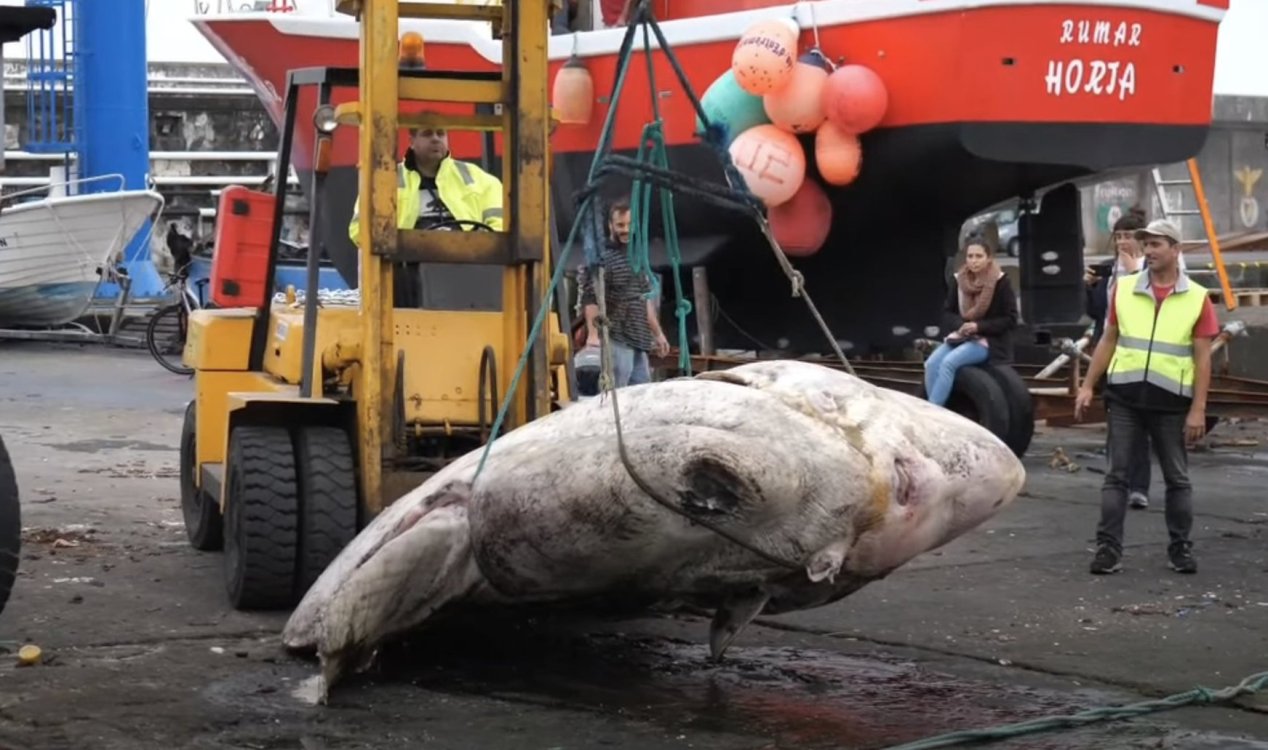 The gargantuan fish had to be lifted with a crane. Image Credit: YouTube / Atlantic Naturalist
This 3-ton behemoth, which was found dead in the Azores, has set a new world record due to its enormous size.
You're going to need a bigger boat if you ever hope to reel in a monster larger than this - measuring 12ft high and 11ft in length, this 6,049-pound giant sunfish is an absolute whopper.

It was discovered floating in the ocean near Faial Island in the Azores back in December 2021 before being hauled back to port by local authorities so that it could be properly examined.

The resulting study, which was published last week by the Atlantic Naturalist Association, describes the immense dimensions of the specimen and officially confirms its record-breaking status.These huge creatures are named after their tendency to bask in the sunlight near the ocean's surface, possibly as a way to re-heat themselves after diving to the much cooler depths.

The species can be found across the globe, though it's unclear how many of them there are.

The previous record holder, which was found in Japan in 1996, weighed around 5,070 pounds.

#1 Posted by jethrofloyd 4 months ago

Doomsday Fish caught in Mexico! Fishermen in Mexico have caught a giant silver-orange-looking Oarfish that is going viral on the internet. The silvery marine creature is rumoured to be a sign of a bad omen. It is the world’s largest bony fish which indicates the possibility of an impending earthquake. The viral clip shared on Twitter shows the oceanic bad omen with a fiery orange head tassel gasping and moving in the bed of a pickup truck. The caption of the footage reads, “Oarfish found off the coast of Sinaloa, Mexico. https://freshheadline.com/doomsday-fish-caught-in-mexico-video-of-oarfish... [More]

That is one big fish! I found this amazing sunfish video...which I now share:

#3 Posted by Still Waters 4 months ago

It's interesting to see one out of the water but I hope they put it back.

Loch Ness Monster is not a giant eel, ma...
Spirituality, Religion and Beliefs

What Type of Atheist are You?
Extraterrestrial Life and The UFO Phenomenon