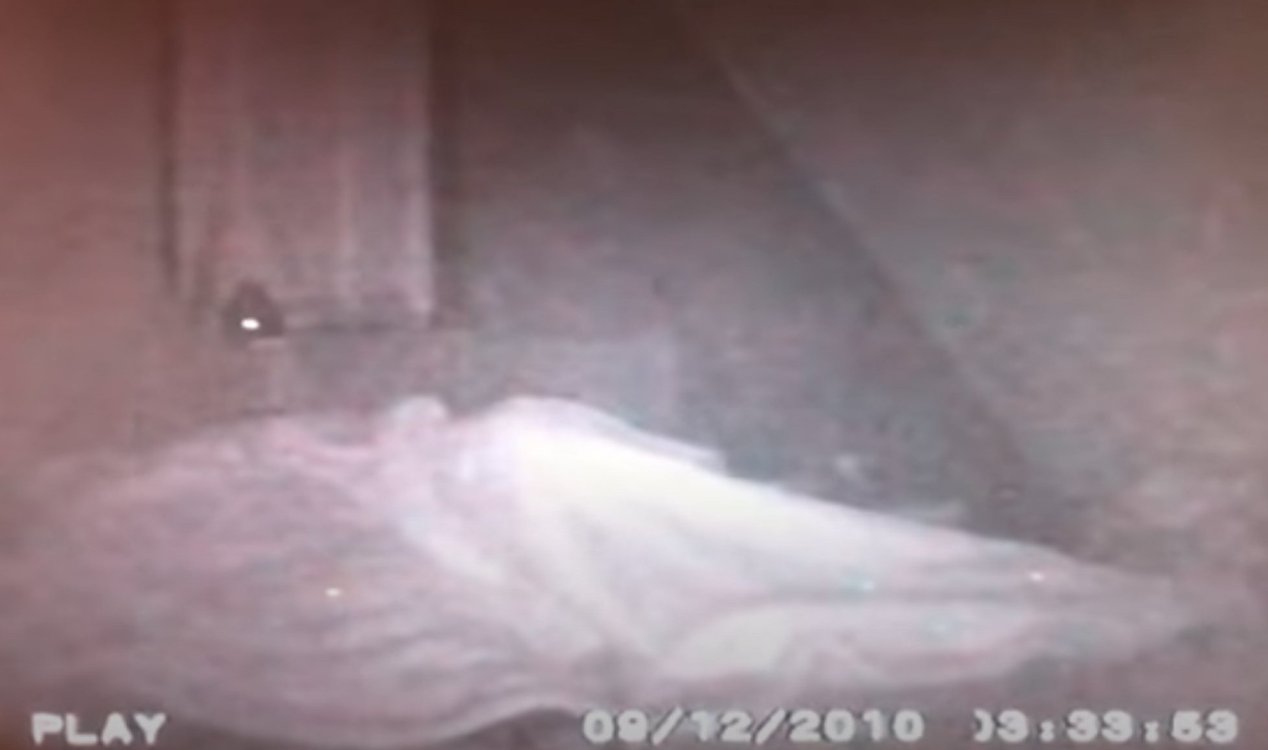 The woman seems to disappear and then reappear (see video below). Image Credit: YouTube / Birmingham UFO Group
UFO investigator Nick Pope recently commented on the clip which went viral after it was featured by a local news site.
The clip, which has come to be known as the Droitwich abduction video, was recorded in the UK in 2010 and had flown mostly under the radar until last year when a team of local researchers known as the Birmingham UFO Group (BUFOG) managed to obtain a copy of it.

The story goes that the woman had believed that she was being regularly abducted by aliens and had decided to install an infrared CCTV camera in her bedroom to capture any potential evidence on film.

The footage itself shows her tossing and turning in bed before seemingly disappearing into thin air with the bed covers falling down at the spot on which she had been lying just seconds before.

She can then be seen to reappear towards the end of the clip - again seemingly out of thin air.The total amount of time she was missing was around 12 minutes.

"Frankly, there's not much middle ground here: it's either a hoax, or something genuinely spooky and - perhaps - out of this world," former MoD UFO investigator Nick Pope told the Birmingham Mail.

"If I had the footage while I was working on the UFO desk, and if I also had access to the camera equipment, I could have secured a proper scientific analysis using intelligence community imagery analysis resources and capabilities."

"That would quickly have told me if the footage was genuine, or had been faked."

Professor offers 'out there' theory on alien abduction
4-2-2022

#48 Posted by XenoFish 4 months ago

Just another nothing burger.

#49 Posted by preacherman76 4 months ago

Well look what the cat dragged in. How have you been bro?

#50 Posted by XenoFish 4 months ago

Dislocated my right shoulder two weeks ago, other than that, not too bad.

#51 Posted by preacherman76 4 months ago

Ouch. How’d you do that?

Hi MGB Maybe they eat us while watching us kinda like popcorn and Netflix.

#53 Posted by itsnotoutthere 4 months ago

#54 Posted by stereologist 4 months ago

It is okay for you to believe in fantasies and to rely on story tellers for your beliefs. But that is all you have - unverified, unsupported stories that are meant to fool the extremely gullible. Actual investigations of reality - science - do not support any of the fantasies you promote. Your story tellers use all sorts of laughable back stories to promote their fantasies such as channeling, mystical lore, faux ancient writings, distorted legends, psychic powers, etc. No matter how bizarre the back story you think that somehow makes their fantasies better. It doesn't. Studies of reality such ... [More]

Where are the aliens? Shouldn't  be there aliens in the video if this is an abduction?

#56 Posted by astrobeing 4 months ago

That's my biggest complaint. I've read dozens of stories of bug-eyed aliens materializing through walls and dragging their helpless victims back through the walls directly into their spaceships. I haven't read a single one in which the aliens caused their victims to sink into their beds.

#57 Posted by Dejarma 3 months ago

so do those who believe it could be real