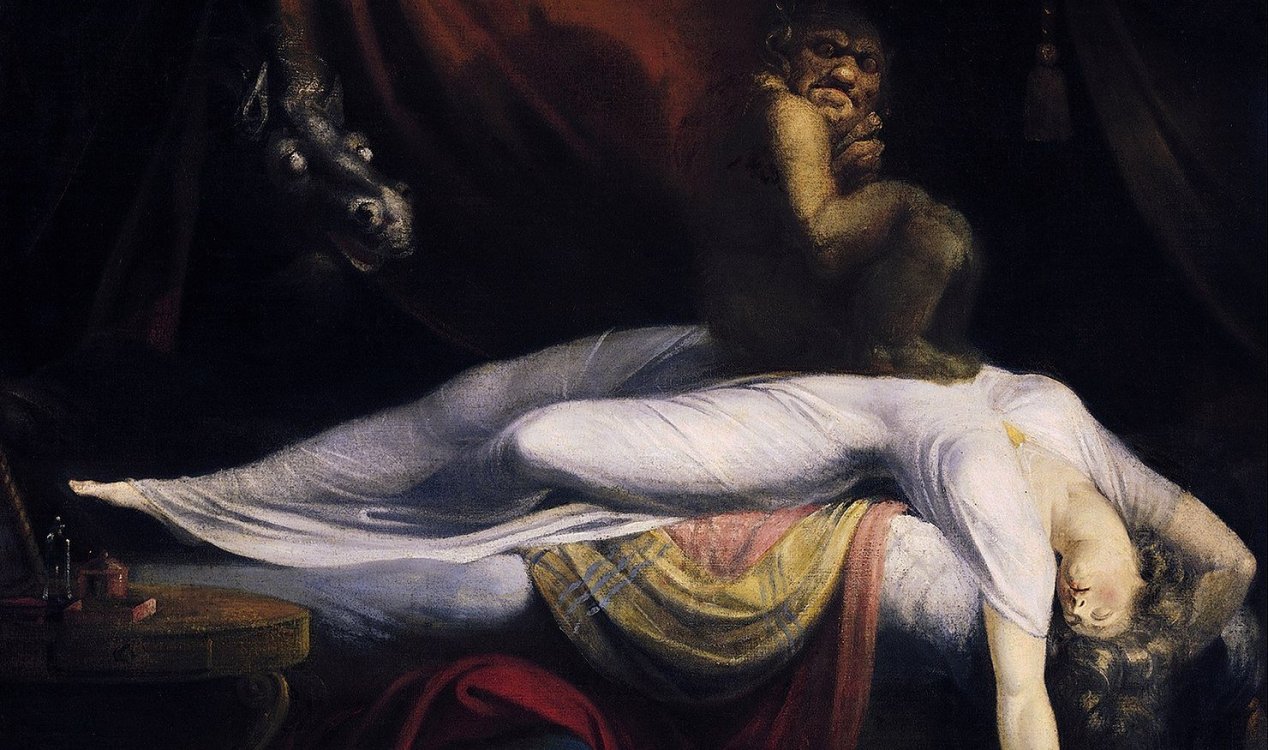 An 18th-Century depiction of sleep paralysis. Image Credit: Henry Fuseli
Scientists have conducted a new study into the link between lack of sleep and a belief in aliens, ghosts and demons.
The time we spend each night in our beds has long been associated with the paranormal - from sleep paralysis and 'things that go bump in the night' to alien abductions - many of the phenomena we associate with the paranormal tend to be reported after hours.

Now researchers have taken this connection one step further by conducting a new study to determine whether or not a lack of sleep might actually be associated with a greater overall belief in paranormal phenomena.

The study involved surveying 8,853 people about their sleeping habits and personal beliefs.

What the researchers found was that participants were a lot more likely to believe in ghosts, demons and aliens if they got fewer hours of sleep or experienced difficulty drifting off to sleep at night.Around two-thirds of those who experienced sleep paralysis or the related 'exploding head syndrome' believed that aliens were already visiting Earth (compared to a mere 3.4% of the total sample).

This same cohort also tended to have a stronger belief in life after death.

"As [sleep paralysis] involves different types of hallucinations, including auditory and visual, and [exploding head syndrome] typically involves a bang, our findings suggest that the belief in aliens may be associated with sleep disturbances that produce sounds or images," the study authors wrote.

"One explanation for these associations is therefore that someone experiencing sounds or images associated with sleep could interpret this as evidence that aliens or other supernatural beings exist."

I agree, I think more people have belief in aliens, ghosts and demons while they are not asleep as opposed to when they are .

#2 Posted by esoteric_toad 15 days ago

Lack of critical thinking (willful or out of ignorance) is a HUGE part of belief in the paranormal.

#3 Posted by Hammerclaw 15 days ago

Ain't no haints ever bother me, cause I bore'em to death with my snorin'.

Cause that's what's keeping them awake?

Sleep is responsible for maintenance of our neurochemisty.  Lack of sleep is like lack of maintenance, which, as we know from the war in Ukraine, can cause lots of serious problems if we don't do it.  It is a chicken-and-egg problem as to whether insomnia is caused by underlying neurological problems or vice versa.  What we can say with some certainty is that the less sleep you have, the more likely you are to hallucinate.  This is because the visual cortex edits everything we see, and it is responsible for dreams.  When dreams leak into our waking consciousness, we hallucinate.  This accounts... [More]

My own lack of sleep causes significant disruption in my rationality and "sense-of-self" I hate it.

I think many sleep disorders go unreported. I'd bet sleep paralysis does. Someone may try otc medication instead of going to MD. Also some medications could make matters worse. I was prescribed one (brand name begins with A) that felt like LSD.

#8 Posted by Occupational Hubris 11 days ago

I have always had endless trouble sleeping. Getting to sleep. Staying asleep. I suffer from rampant insomnia a handful of times a year. I regularly get no more that 5 hours of sleep a night, if i'm lucky. I have zero belief in the paranormal.

I've driven long distances out bush and when very tired I've hallucinated, seeing green kangaroos and emus. This has nothing in common with paranormal experiences which are not hallucinations.

Staying up late is a trigger that a schizoid must be careful to avoid. here are 12 triggers to avoid: 1.Fan or spaceheater, 2.ongoing story, 3.rejuvination with schizoid art and music, 4.open window, 5.believing telepathy and all eyes are on your thoughts, 6.staying up late, 7.defending yourself against cruelty, 8.invention fear, 9.fear in the paint on the wall (pareidolia), 10.wanting to be center of attention, 11.being bullied 12.people in the other room talking/TV.