What is this thing ? Image Credit: YouTube / Focus dos Fluxos na Cidade
A video uploaded earlier this week shows an anomalous object flying high over Brazil's most populous city.
The footage, which is entitled 'Ceu de surpresas' (or 'Sky of Surprises'), was reportedly filmed over Sao Paulo on February 16th, 2020 at 8:45 ( presumably in the morning.)

At first, the individual filming the spectacle seems to have difficulty focusing on it, however after zooming in for around 30 seconds they are able to obtain a clear view.

The object itself is nothing if not bizarre. Resembling a jellyfish, it has a round-shaped top with a number of white tentacle-like protrusions trailing behind it.Sadly little else is known about the footage or who uploaded it, however the channel appears to contain a number of other UFO videos, which does raise some suspicion over its authenticity.

You can check out the video for yourself below.

Could this be a genuine object or is the footage nothing more than a hoax ?

#27 Posted by Grandpa Greenman 3 years ago

I go with the tattered weather balloon theory.

It’s a damn sky squid. I thought we had seen the last of those

Maybe a leaky balloon (with gas very slowly coming out from multiple holes). Or a multi-vortex. Some kind of weird balloonish spacecraft after reentering. Interesting video, Seems genuine to me.

I agree. It looks like some sort of balloon that is going down. However, without any good reference points it's hard to tell if it's actually moving or not.

#31 Posted by plants_in_skulls 3 years ago 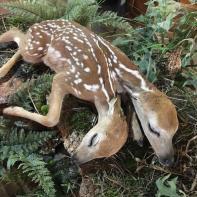 Seems interesting that the tendrils aren't moving. At that altitude there should be a good amount of wind. To me this says it's either edited or if is a real advanced air/space craft then maybe that's part of its technology, but I find the fake far more likely

This is probably one of the weather balloons we hear about.

I'm going to guess it's a prototype for a 5G floating antenna. This is supposed to be a thing now and I'm sure there are many designs out there vying for the chance to be the one. The tentacles/tendrils/whatever may be the part that picks up the signals and sends them into the main balloon on top.

I don't do Reddit. I don't live with my mom either.

When a video is sumitted with basically no iinformation 99.9% of the time i think hoax, I could see 2 quick ways to do this, one is balloon under tattered plastic or a quad copter towing dangling the item, Perhaps this really is some otherworldly being or craft but im not using it as proof of such.