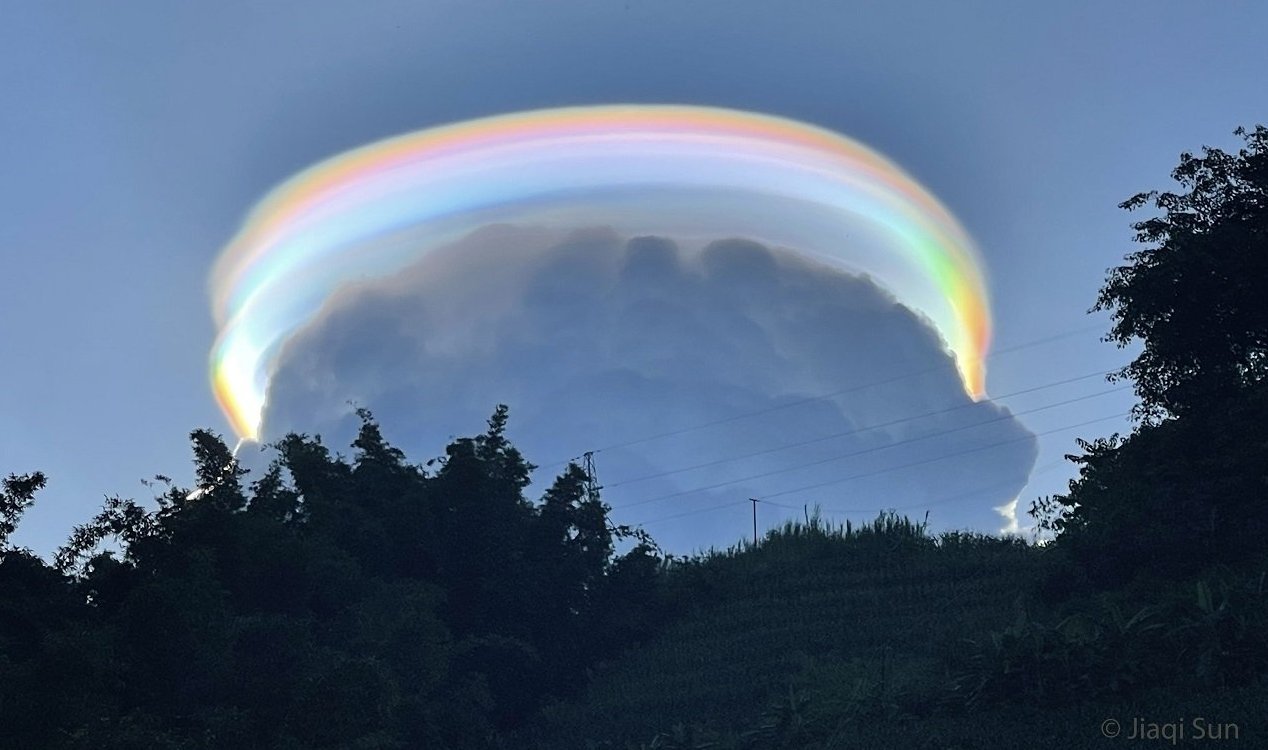 This unusual phenomenon is nothing if not spectacular. Image Credit: Jiaqi Sun / NASA / Facebook
An explanation for this remarkable meteorological phenomenon was shared online by NASA - but not everyone was convinced.
Resembling a bright multi-colored halo of iridescence nestled in a formation of dark clouds, it's not difficult to see why this impressive spectacle has been drawing quite a bit of attention on social media.

It was spotted over China's Yunnan Province back on September 6th.

An image of the phenomenon captured by Jiaqi Sun was shared on Facebook as NASA's "Astronomy Picture of the Day".

"Behind this darker cloud, is a pileus iridescent cloud, a group of water droplets that have a uniformly similar size and so together diffract different colors of sunlight by different amounts," NASA wrote."The formation of a rare pileus cloud capping a common cumulus cloud is an indication that the lower cloud is expanding upward and might well develop into a storm."

While this would seem to put the matter to bed, several social media users commented on the picture to claim that there was something suspicious about such a perfect (and unusual) cloud formation.

This led to a flurry to conspiracy theories, with some arguing that the cloud was a UFO, while others believed it to be evidence of secret government testing or geo-engineering projects.

Suffice to say, however, that NASA's explanation for the spectacle is by far the most likely.

#1 Posted by glorybebe 13 days ago

It's beautiful.Ā Nature has a way to produce phenomenal instances and so many are in the air.Ā That being said, it would be cool if it was proof a UFOĀ

#2 Posted by jethrofloyd 13 days ago

That cloud is nice, but it's not the UFO. This is the UFO:

#3 Posted by glorybebe 13 days ago

#4 Posted by Dreamer screamer 13 days ago

I thought that program was closed but it isn't.Ā Even when it does close, the conspiracy theories will live on in perpetuity Ā

I remember reading something about China doing some kind of cloud seeding to create artificial rain. Perhaps this has something to do with that.

It is the result of chemtrails, in China they call that cloudseeding.