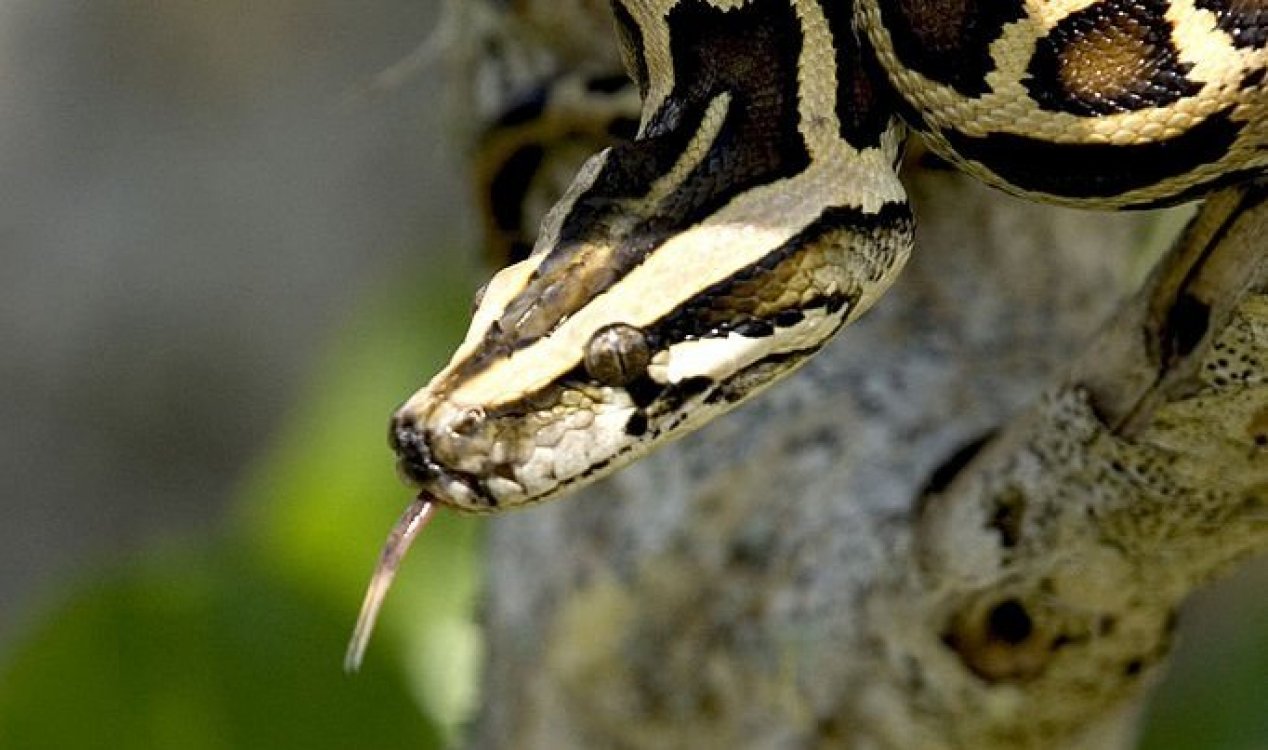 Pythons can swallow very large animals - including humans. Image Credit: Everglades NPS
The incident serves as a stark reminder of the danger these enormous snakes can pose to humans.
There are few fates as horrific as being eaten alive by a giant snake and while this might sound like something that would only happen in a horror movie, the cold truth is that man-eating snakes are a very real danger and a number of unfortunate individuals have fallen foul to them over the years.

The latest victim - a grandmother in her 50s - had reportedly been heading to a rubber plantation in the jungle of Indonesia's Jambi province when she encountered a huge reticulated python.

The snake ultimately swallowed her whole - suffocating her to death inside its body.

After she failed to return home, search parties were sent out to look for her. Rescue workers eventually discovered the python and became suspicious of its bulging stomach.When it was cut open, the missing woman's remains were found inside.

While it is certainly rare to be eaten alive by a giant snake, incidents such as this can and do happen.

Two other deaths attributed to pythons were reported in the same country back in 2017 and 2018.

These huge snakes are able to open their mouths so wide that they can swallow animals much larger than themselves. Some have even been documented swallowing entire cows.

Suffice to say, if you happen to come across one of these reptiles, stay as far away as possible.

I hate snakes, I call them the devils spaghetti. One killed my dog so I kill every one of the slithering serpents I see now. Not saying it's the snake's fault, they are what they are, total sh--. .

it's nature, the snake isn't a villain, it has no other options, it isn't pretending to be a predator, it IS a predator. I'm part of nature also as I live here. I kill snakes so that makes me a predator. I don't have options either, I kill them or they kill me, my family and pets.

That's the thing, I think they would get a taste for humans and ambush other people. Good thing they killed it.

#31 Posted by pallidin 1 month ago

Remind me of your statement when you are eaten alive by, say, a crocodile. According to you I should not pity YOU, rather celebrate the croc. That's sick.

My wife will kill any snake any chance she gets as well.   We don't have many dangerous snakes where I am at, mostly just harmless garter snakes.  I leave them be as they eat mice and such.

I don't blame her, lol. We don't have any non venomous snakes where I live, the most common is the Eastern Brown, the world's second deadliest land snake. I bought a run down farm that had 8ft grass in the paddocks and around the house, it was infested with mice, quail and snakes. When I grazed stock all the snakes moved into the house yard. Luckily I'm a greenkeeper and an expert with a shovel, lol.

Hopefully you didn't get too many mice in the house.

No, I had to keep my terriers inside mostly so they didn't get snake bitten, so no mice, lol. A jail in the closest town was shut down due to a mouse plague though, they chewed all the wiring which isn't great on cell door operation, .

Yes because we don't need the enzymes to maintain our microbiomes. As for my other thoughts. They were already stated.

#37 Posted by LadyPhoenix 11 days ago

So you consider the animal to be more important than a human being?  Well, then, if/when you are ever out in some area with predators, be sure to inform all who might need to search for you not to bother, because, gee, any predator danger doesn't matter.  Right?  I mean, why should people search and place themselves in danger, just to locate someone who believes he doesn't matter because he's human, right?  I could say more, but others already have, and it doesn't appear to have gotten through to you.