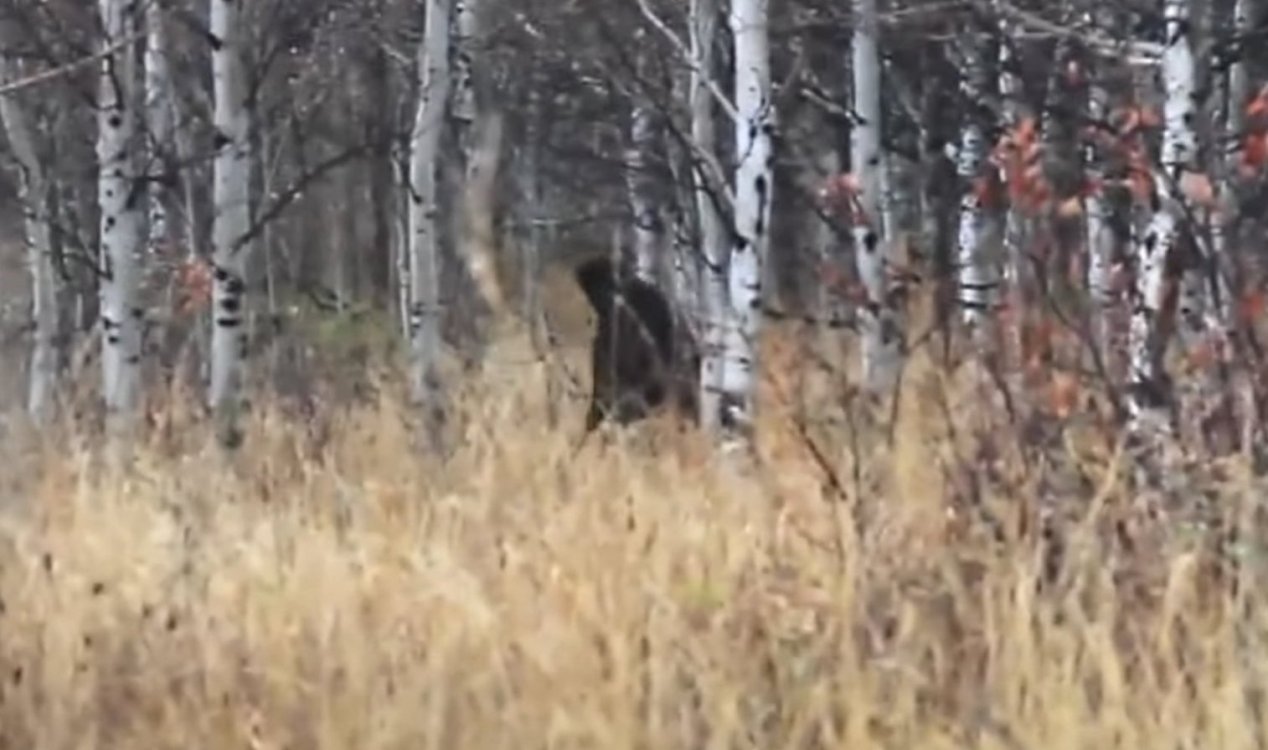 Is this a Bigfoot, a person wearing a costume, or something else ? Image Credit: YouTube / Nv Tv
Another video clip of an alleged Sasquatch has appeared online - but is it really an unknown hominid or just a prankster in a suit ?
The footage, which was uploaded onto the YouTube channel 'Nv Tv' yesterday, begins with a brief backstory stating that the individual who submitted it was a hunter who had been out in the woods when he saw something unexpected and decided to hide in the bushes to get a closer look.

When the creature moved away he attempted to follow it but it was too quick and he couldn't keep up.

No specific details of exactly when and where the video was recorded were provided.The identity of the individual who submitted the clip also remains a mystery.

The footage itself, which does seem to show a bipedal hominid of some kind traipsing through the forest, is certainly interesting, but it's impossible to tell for sure that it is a genuine creature.

As with many clips of this nature, it would be fairly easy to fake the footage and we certainly can't rule out the possibility that it is simply a person in a Bigfoot costume.

You can check out the video for yourself below, what do you think ?

We each take what is presented to us and make up our own minds based on evidence or lack thereof, of course this is a hoax. And sure after over 40 years of interest and research in the bigfoot phenomenon im a bit jaded and cynical afterall all we have are stories just because a person seems sincere doesnt make it so most con artists are very sincere. The typical "story" is a person claims to have seen "something" and they dont know what it really is so they make an unsupported leap from unknown to it must be xxxxx ( paranormal whatever ) thats a huge issue because we cant real an absolute conc... [More]

#25 Posted by DieChecker 5 days ago

Except to the other skeptic. I'm actually a skeptic. I've not seen anything to convince me BF is real. But at the same time I always weigh new evidence to see if I was wrong. Too many say, "40 years and no bigfoot, so I'm going to S#it immediately on anyone who doesn't agree". That's not science, or reason. That's enforcing a bias. Sorry if I lumped your post in with the truly offensive ones. Lack of evidence is totally true, but is used often as an excuse to belittle and bully people.

I hear you,  i did say my over 45 which is what i have thing is the phenomenon is older by far and as time passes and nothing no good evidence i admit i dont really believe there is anything to find, i dont attack or insult dear believers unless they go there first. I am one who needs proof of a claim otherwise its just another story to me that shouldnt be insulting but it is. Its also not science and enforcing a biased to insist an unknown to a person can only be bigfoot, ive had experiences that i was lucky enough to have learned the true explanation my zombie deer was one, had i jumped and ... [More]

#27 Posted by DieChecker 5 days ago

I just today was driving and stopped and saw something unknown. I was like "WHAT IS THAT!!". I saw a weird head that pointed upward with eyes on the sides, and a tan furred body with one pair of legs sticking out the sides, angled out to the ground. I was seeing it from directly behind. Then it stood up. It was a deer taking a crap. I'd never seen one squat to poop before, but that's what it had been doing. I agree seeing something and identifying it are two different things. Shame I didn't take a pic immediately. It looked way weird.

I hear that, a few weeks back on my late drive home i see what i think is,a small kangaroo but it was a coyote dumping one. My favorite is zombie deer, several years back its about 2am im out turning and testing my vw trike, i pull over on a really dead back road to tweak it i sit on ground behind engine i have a lil work light. I am drifting in my mind turning away ( engines off ) i hear something in the tree line not too far from me, it was like animal yet weird humanish and i swing my lil light that way but its not bright, i admit i wanted to see something but in the dark alone its scary bu... [More]

If that was a BF or any wild animal it must be deaf the amount of crunching through the grass and twigs the camera man made. I wouldn't take him hunting. Yeah hoax as usual.

It actually looks more like Jimi Hendrix than Big Foot!