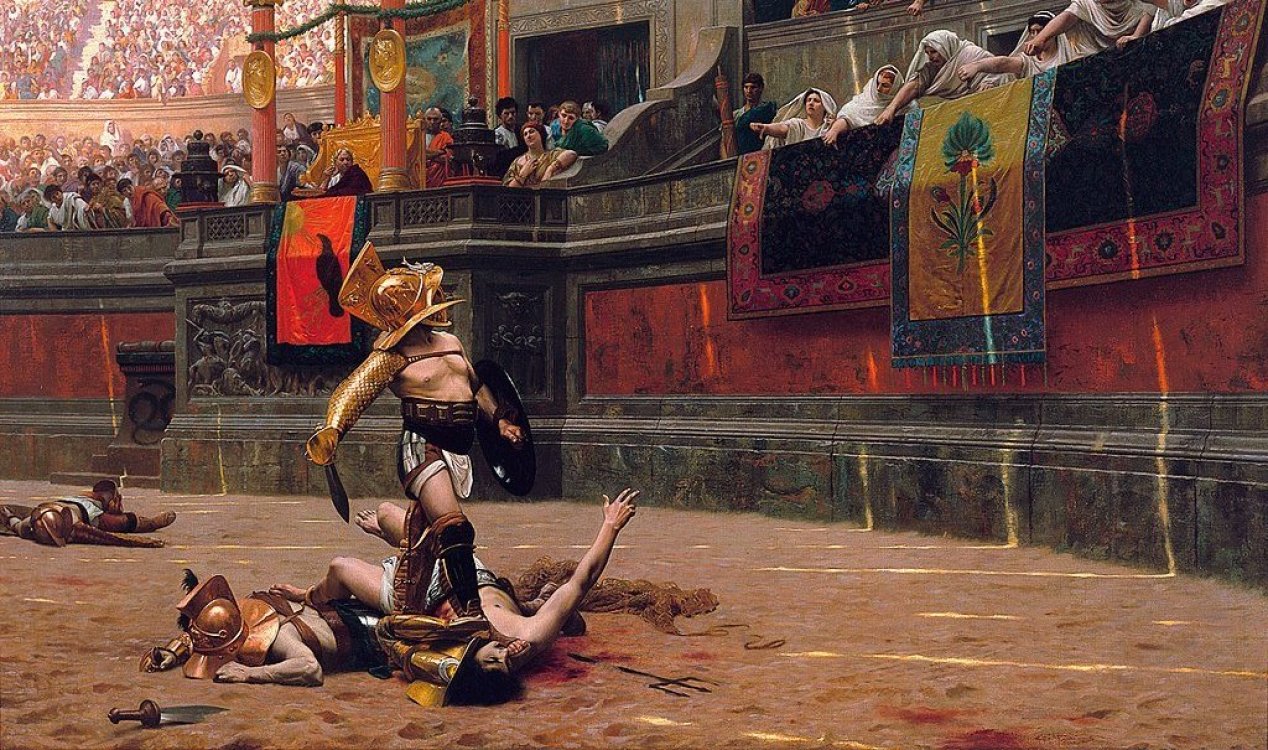 Fights in the arena were bloodthirsty to say the least. Image Credit: PD
Archaeologists have made a number of intriguing discoveries in the sewers beneath the ancient gladiatorial arena.
In its heyday the Colosseum would have been a true marvel to behold; the largest amphitheater ever built, this huge stone structure would have been frequently filled with the cheers of thousands of spectators as battle-hardened gladiators fought to the death in the arena below.

Wild animals such as lions, tigers and bears were also often introduced to keep things interesting, usually resulting in the human participants being mauled to death, much to the crowd's delight.

Now archaeologists working on uncovering evidence of what went on at the Colosseum in its prime have discovered a number of intriguing finds in what was once the building's sewers.

The finds, which include the remains of olives, fruits and nuts, provide a unique insight into the diet of the people who once attended events at the Colosseum two thousand years ago.The bones of some of the wild animals used in the arena, such as big cats and bears that would have been forced to fight one another to the death, were also found.

"[These finds offer a look at the] experience and habits of those who came to this place during the long days dedicated to the performances," said Colosseum Archaeological Park director Alfonsina Russo.

A selection of fruit seeds, stones, & pits recovered from the drainage system of the Colosseum in #Rome, remains of the snacks eaten by #Roman spectators watching the games in the arena up to 1900 years ago #RomanArchaeology pic.twitter.com/qrSSRQUIYB

Next story >>
How can we test to see if we are living in a computer simulation ?
Recent comments on this story

Yup sure everybody likes a good snack as your watching a guy get his head lopped off. Popcorn and a soda. The only difference is now days we know the killing is not real.

#2 Posted by DanL 2 months ago

This is about the first time in American history that you will have a generation of young men that NEVER faced the possibility of having to go somewhere and kill or be killed by someone. I hope that if called upon our future generations will be able to rise to the call without being totally devastated by having the kill or be killed in some sort of meaningless political war. We have repeatedly forced freedom on people that had no concept or desire for it. Even today South Korea will only stay free and democratic as long as America is willing to force their young men to go there and fight and d... [More]

#3 Posted by Kleng 2 months ago

BRIAN: Larks' tongues. Otters' noses. Ocelot spleens. REG: Got any nuts? BRIAN: I haven't got any nuts. Sorry. I've got wrens' livers, badgers' spleens-- REG: No, no, no. BRIAN: Otters' noses? REG: I don't want any of that Roman rubbish. JUDITH: Why don't you sell proper food? BRIAN: Proper food? REG: Yeah, not those rich imperialist tit-bits. BRIAN: Well, don't blame me. I didn't ask to sell this stuff. REG: All right. Bag of otters' noses, then. FRANCIS: Make it two. REG: Two.