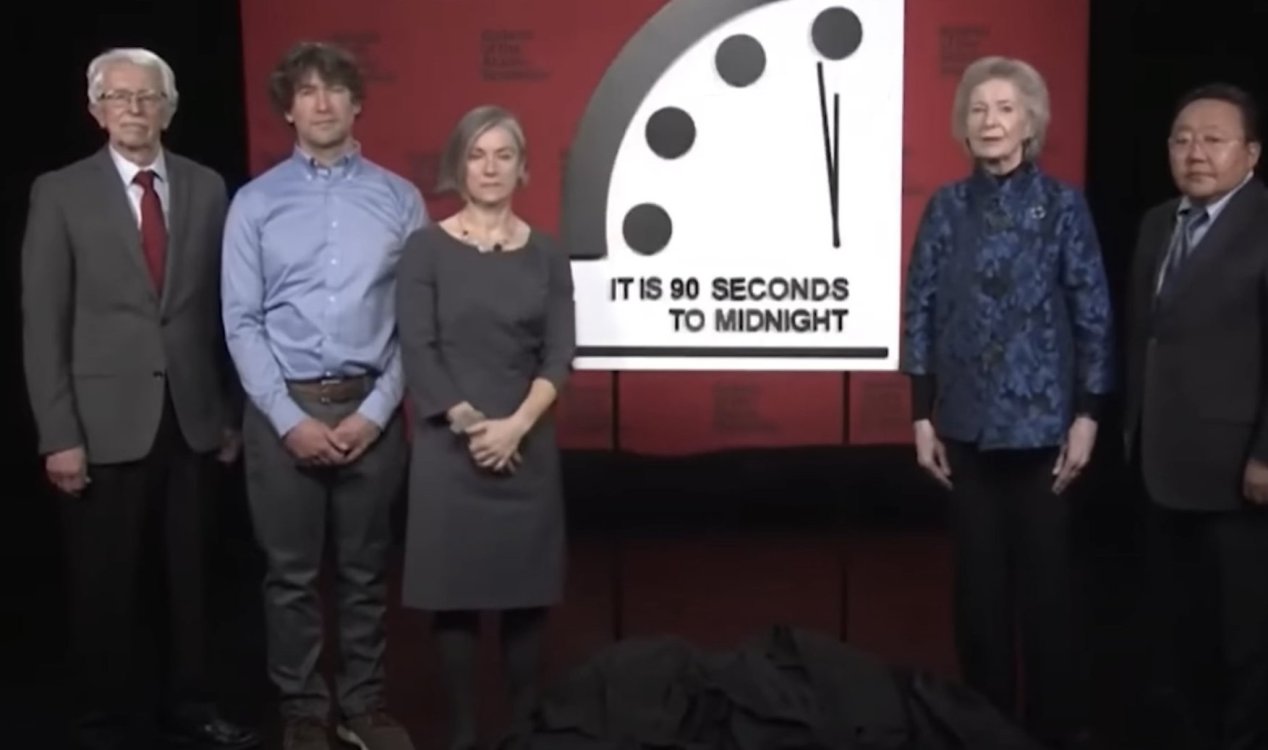 The clock is now 90 seconds to midnight. Image Credit: YouTube / Bulletin of the Atomic Scientists
The disconcerting change reflects the current situation in Ukraine and the increased risk of global annihilation.
Maintained by the Bulletin of the Atomic Scientists since 1947, the Doomsday Clock is a visual representation of how close the world is to disaster based on political, environmental and technological threats such as nuclear annihilation and climate change.

For several years, the hands of the clock had remained at 100 seconds to midnight, but now, following Russia's invasion of Ukraine and Putin's threats of nuclear reprisal, the time on the symbolic clock has been changed to a mere 90 seconds to midnight - the closest it has ever been.

"Russia's war on Ukraine has raised profound questions about how states interact, eroding norms of international conduct that underpin successful responses to a variety of global risks," an official statement accompanying the decision reads."And worst of all, Russia's thinly veiled threats to use nuclear weapons remind the world that escalation of the conflict - by accident, intention, or miscalculation - is a terrible risk."

The possibility of accidental damage to a nuclear power station, which could result in a repeat of the Chernobyl incident (or worse), has also been highlighted as a factor in the decision.

"The possibility that the conflict could spin out of anyone's control remains high," the statement reads.

#6 Posted by DieChecker 11 days ago

I'm sure this will be true next year. Then it will go to tens of a second and hundredths of a second. It's pure political drama, IMHO. Rubbish.

We should probably keep send them money.

#8 Posted by OpenMindedSceptic 10 days ago

#9 Posted by DieChecker 10 days ago

What is it even they are trying to scare us into doing?  Fix climate change? Fix nuclear proliferation? When was the last time a nuclear test was even conducted? 2017 apparently... Shouldn't the Nuclear Doomsday clock have ticked backwards with nuclear stockpile drawdowns, and lack of testing, and the Iran deal? Even the Trump North Korea talks should have pushed things back a bit. Who else is looking to proliferate?  The point of this clock IS NOT to be a realistic indicator of the world, because it most certainly is not. It's simply an attempt, and a poor one at that, to SCARE people into do... [More]

#10 Posted by MysteryMike 10 days ago

Just a stupid publicity stunt, nothing more. Move along folks, nothing to see here. Nobody is gonna know when the world truly ends. Could be today, tomorrow, next week, next month, sometime this year, next year. No one will ever know.

IF a nuclear war ever does happen, the one thing most agree on is that it will effectively be over and complete in an hour or so.  There might be launches after that time but they'll be pointless to the outcome.  The first time I heard that and it really sank in, I thought about the prediction in the Bible about the destruction of Babylon.  Her fate is to be burned by fire and that all of her wealth and power would end "in one hour".

#13 Posted by MysteryMike 7 days ago

Which part?  I assume you mean the Babylon bit.  That's cool.  But the first part has nothing at all to do with religious doctrine.  I don't recall the publication but it was science-based and it isn't difficult to imagine it being accurate.  Ever hear of the doctrine of "Use it or lose it"?  A real exchange would devastate most nations very early on.

Mystery of dog-walker who has vanished
Cryptozoology, Myths and Legends

Koch Political Machine Vows to Fight to ...
Extraterrestrial Life and The UFO Phenomenon