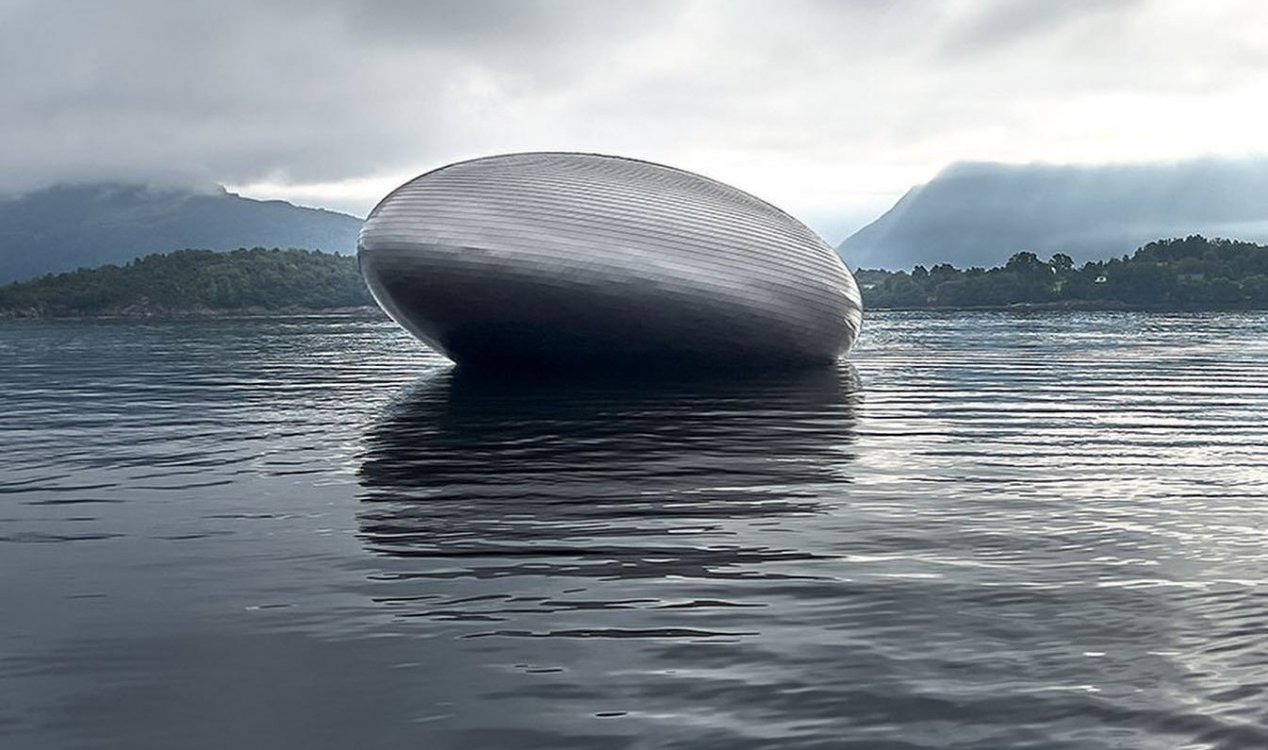 It looks like a spaceship, but it isn't. Image Credit: Facebook / Kvorning Design
An object resembling a flying saucer has appeared on a lake in Norway, but not everything is as it seems.
Photographs of a large, silvery, oval-shaped object floating on the surface of Norway's Hardanger Fjord in Hagardsneset sparked a great deal of intrigue on social media earlier this month.

Its resemblance to a UFO - in particular the chrome spaceship from the 1980s movie Flight of the Navigator - prompted suggestions that it could be evidence of extraterrestrial visitors.

As it turns out, however, this mysterious looking object is in fact a unique art exhibition that has been designed to resemble the silvery scales of a fish.Known as "The Salmon Eye", it weighs 1,256 tons and was designed by Danish studio Kvorning Design with funding from Sondre Eide - CEO of salmon farming firm Eide Fjordbruk.

The installation is entirely flee-floating and reportedly contains four interior floors featuring a cinema and several exhibition floors, though exactly what is being exhibited inside remains a mystery for now.

"I am convinced that the floating aquaculture information center and art installation will be setting new standards for sustainable aquaculture in every aspect. Design, interaction, research, technology, and immersive experiences."

<< Previous story
Woman discovers raccoon lounging around in her hammock

#11 Posted by ItwasAliens 8 days ago

Looks like one of those rubber half deflated exercise balls. Also looks like a gianT waste of time. Not impressed. Far from a ?Ufo? the guy must be bored to death. Oh and the reveal was about as fun as cleaning.

I wonder why it is so heavy, wouldn't it sink when it weighs 1256 tons?

Anti-gravity drives keeping it afloat. Those aliens are brilliant.

Heres one in lake eola orlando, as a kid in the 70s i was sure it was the mothership,   It was iifc builf late 50s and has had times it was in poor shape ive been up to in in a boat.

#15 Posted by Nnicolette 7 days ago

Like a boat? Yeah I was thinking pounds.... That is ridiculously heavy.

#16 Posted by ThereWeAreThen 6 days ago

#17 Posted by OverSword 5 days ago

#18 Posted by stereologist 5 days ago

Here are some UFO shapes

Flight of the Navigator Excellent movie. One of my favorites growing up, then watching it with my boy many years later made it even better.