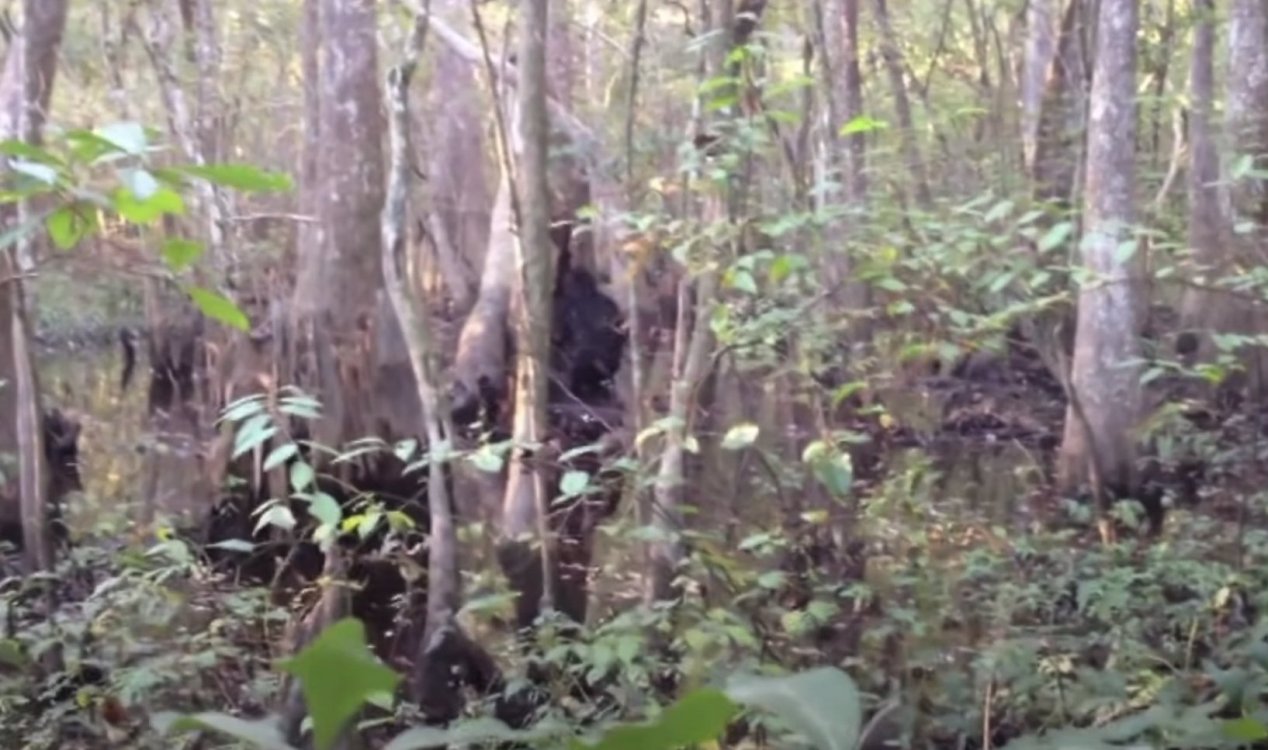 Is this a Bigfoot, a bear, or something else ? Image Credit: YouTube / Josh Highcliff
This footage of an alleged Bigfoot-type creature emerged 8 years ago and has remained a topic of debate ever since.
On October 28th, 2013, a hunter named Josh Highcliff uploaded a clip to his YouTube channel showing what appeared to be a large bipedal creature covered in dark hair.

Reportedly filmed around 9 miles west of Tunica, Mississippi at 9pm in the evening, the creature - described as a 'skunk ape' - can be seen crouched down and digging out a tree stump.

After a few seconds it stands, revealing its true stature, before Highcliff turns and flees.

"There was this huge black thing crouched by a dead cypress about 50 yards away, I thought it was a hog but saw these big shoulders and a head upright with hands," he wrote.

"It looked like it was digging out the stump. My first instinct was to run, I did not even think of shooting... then I know no one will believe me... it was like everything slowed down... I was scared!""I took out my iPhone and started videotaping it... I guess I pushed the record button twice cause it stopped blinking red... but I pushed it again. I hear a truck driving down the road and the thing stood up!! I was trying to be dead quiet... when it stood up I could not control myself and ran."

"That stump was huge and I'd guess the sucker was 7 feet tall, I am a hunter and am pretty darn good at guessing size. That's no bear!"

While many have dismissed the video as little more than a hoax, others remain unconvinced.

Even today, 8 years on, there are still those who remain adamant that the video is genuine.

You can check out the original clip below - what do you think it shows ?

#15 Posted by Oniomancer 3 months ago

Even if it wasn't my original assessment from the last time this came up still stands. He's, what, 30-40 feet behind this thing (definitely not 50 yards) making enough noise to wake the dead and it's so intent on what it's doing it doesn't even notice? I don't think so. Also, am I imagining things or does he heelturn after he stops at the palmettos and run back towards it?

#16 Posted by Trelane 3 months ago

In bigfootery, there is a great deal of shame to go around.

Sigh.  Everyone knows that.

Consider the nearly exponential growth curve of technological innovation in the past 150 years.  Consider how that in that space of time we went from whale oil to the internet.  Now consider that growth curve projected into the future another 150 years.  Sometimes truth is stranger than fiction.

#20 Posted by ThereWeAreThen 3 months ago

But the bias....papameter said 65% cryptid so it cant be a hoax.

Certainly not everyone; there are more than enough credules to keep teevee shows like (not) Finding Bigfoot afloat.

I literally posted this in the wrong thread,  what a fail.  I’m firing myself.

#23 Posted by DieChecker 3 months ago

Thanks to Carnoferox for the info.

We have "skunk apes" in florida they are made up of many different escaped or released apes and monkeys this video wasnt one of them.

UFO researchers hunt for photographer be...
United States and the Americas