'Planet killer' asteroids - could we one day miss one that's heading our way ? 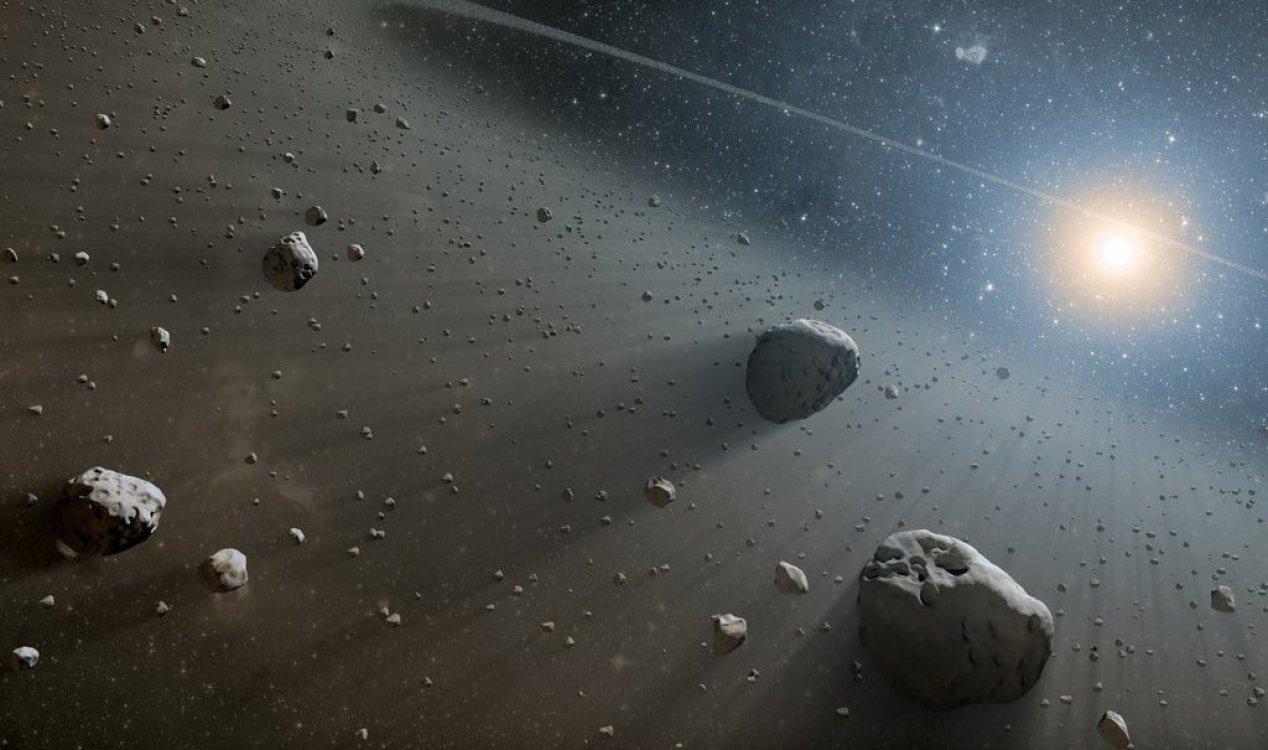 Image Credit: CC BY-SA 4.0 Pablo Carlos Budassi
Astronomers recently detected a number of large (albeit benign) asteroids obscured by the glare of the Sun.
If you surfed the web this morning, you may have seen news of the latest existential threat to humanity: a "planet killer" asteroid named 2022 AP7.

Luckily for us 2022 AP7 "has no chance to hit the Earth currently", according to Scott Sheppard at the Carnegie Institution for Science. He and his international team of colleagues observed 2022 AP7 in a trio of "rather large" asteroids obscured by the Sun's glare (the other two don't pose a risk).

2022 AP7 orbits the Sun every five years, and currently crosses Earth's orbit when Earth is on the other side of the Sun to it. Eventually its movement will sync with Earth's and it will cross much closer by, but this will be centuries into the future.

We simply don't know enough about 2022 AP7 to precisely predict the danger it may pose centuries from now. At the same time, we suspect there could be other "planet killers" out there yet to be discovered. But how many? And what's being done to find them?

What makes a planet killer?

Asteroid 2022 AP7 is the largest potentially hazardous asteroid (PHA) found in eight years, with a diameter between 1.1km and 2.3km. For context, an asteroid with a diameter more than 1km is enough to trigger a mass extinction event on Earth. As well as having a diameter greater than 1km, an asteroid also needs to have an orbit that crosses Earth's to be considered potentially dangerous. In the case of 2022 AP7, any threat is centuries down the track. The important point is it has been detected and can now be tracked. This is the best possible outcome.

It is estimated we've already discovered about 95% of potentially hazardous asteroids, and that there are fewer than 1,000 of these. The work of Sheppard and colleagues highlights that hunting down the remaining 5% - some 50 asteroids - will be a massive effort.

What constitutes a near miss?

NASA closely tracks all known objects in the Solar System. But every now and again an object will catch us off guard.

In 2021, we had a close call with an asteroid called 2021 UA1. It came only a few thousand kilometres from Earth, over the Antarctic. In cosmic terms, this is uncomfortably close. However, 2021 UA1 was only two metres across, and therefore posed no substantial risk.

There are likely hundreds of millions of objects of this size in our Solar System, and it's not uncommon for them to impact Earth. In these cases, most of the object burns up in the atmosphere and creates a spectacular light show, with little risk to life.

In 2019 another asteroid with a 100m diameter passed Earth some 70,000km away. It was publicly announced mere hours before it flew past. While it wasn't as close, it was of a much more concerning size.

These near misses reiterate how important it is for us to speed up the search for near-Earth objects.

Blind spots The reason we haven't already found every object that could one day pass nearby Earth is largely because of observational blind spots, and the fact we can't observe all parts of the sky all the time.

To find 2022 AP7, Sheppard and colleagues used a telescope at twilight soon after the Sun had set. They had to do this because they were looking for asteroids in the vicinity of Venus and Earth. Venus is currently on the other side of the Sun to Earth.

Making observations close to the Sun is difficult. The Sun's glare overwhelms the weak light reflected off small asteroids - presenting a blind spot. But just before and after sunset, there's a small window in which the Sun's glare no longer blocks the view.

Right now there are only about 25 asteroids known to have well-determined orbits that lie entirely within Earth's orbit. More are likely to be discovered, and these may contribute significantly to the missing 5% of potentially hazardous asteroids.

The collision altered Dimorphos's 12-hour orbital period by more than 30 minutes, and was declared a resounding success. So it's plausible for humans to redirect a hazardous asteroid if we find one.

That said, we'd have to find it well in advance. Potentially hazardous asteroids are much larger than Dimorphos, so a bigger collision would be required with plenty of lead time.

To do this, NASA has plans to survey for potentially hazardous objects using a telescope in space. Its Near-Earth Object (NEO) Surveyor, scheduled to launch in 2026, will be able to survey the Solar System very efficiently - including within blind spots caused by the Sun.

That's because the glare we see while observing from Earth is caused by Earth's atmosphere. But in space there's no atmosphere to look through.

It's very likely the Near-Earth Object Surveyor will reveal new objects, and help us characterise a large number of objects to greatly improve our understanding of threats.

The key is to find as many objects as possible, categorise them, track the risks, and plan a redirection mission as much in advance as possible. The fact that all of these elements of planetary defence are now a reality is an amazing feat of science and engineering. It is the first time in human history we have these capabilities.

I think you should rephrase the question.  Earth misses quite a few and everyone is very happy when we do.

#2 Posted by jethrofloyd 21 days ago

There's no way we'll miss a single one of 'planet killers'. Bruce Willis protects us.

Only if God is good    It'd only be an improvement if the current mess was razed.