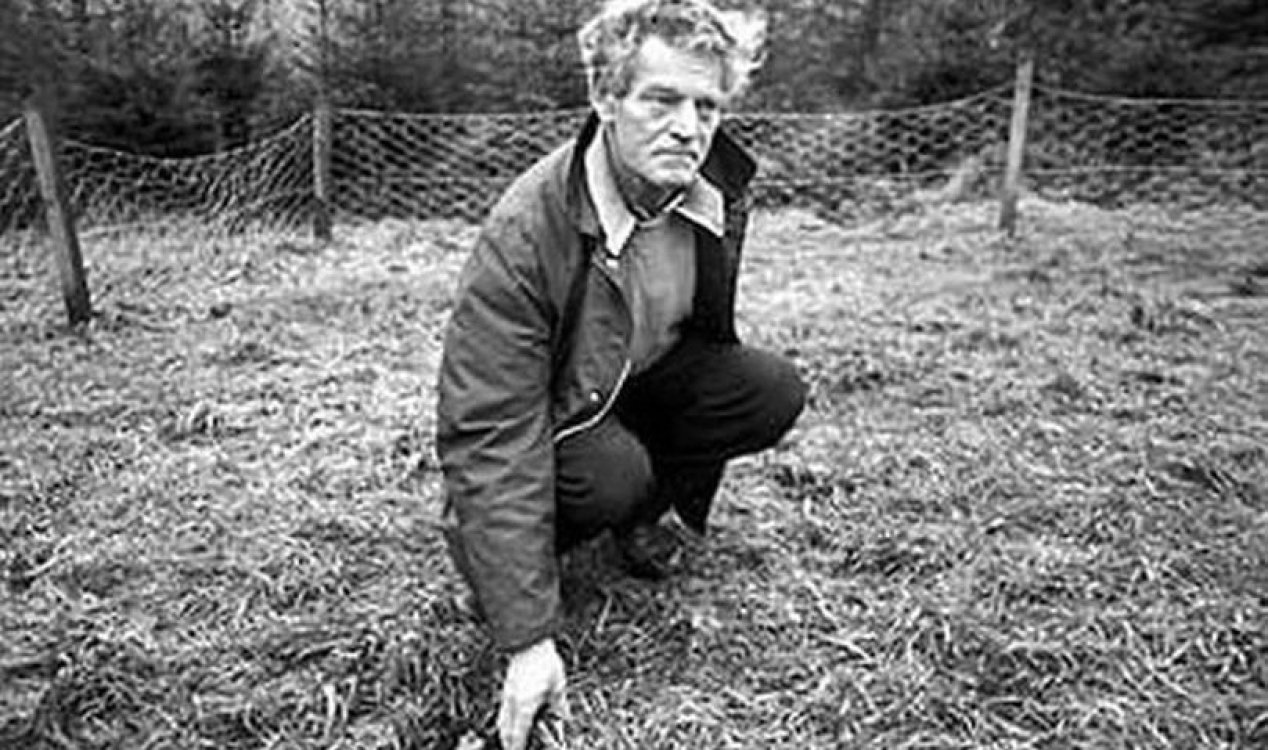 Bob Taylor at the scene of the incident. Image Credit: Archival / Edinburgh Evening News
The 61-year-old had a close encounter with something unexplained in a remote Scottish forest back in 1979.
It is one of the most chilling UFO incidents ever reported and even now, more than four decades later, we are still no closer to understanding exactly what happened.

It all started when Robert "Bob" Taylor - a 61-year-old forestry worker - went out into the Dechmont Woods in West Lothian, Scotland on November 9th, 1979 to walk his dog - a red setter named Lara.

As he turned a corner, he came across what he described as a "flying dome" that was hovering a few inches above the forest floor a short distance from where he was standing.

Its surface, he noted, was like "a dark metallic material with a rough texture like sandpaper" and a distinct smell similar to that of burning brakes seemed to permeate the air.

Then, without warning, two spiked, metallic spheres appeared, grabbed his clothes and began dragging him across the grass towards the object.

It was at this point that he fell unconscious.When he awoke several hours later, he found that his clothes were torn and that he had suffered a series of cuts and bruises all over his body.

Upon arriving home, his wife took one look at him and assumed someone had beaten him up.

When police officers later went to investigate the scene of the incident, they discovered strange "ladder-shaped marks" on the ground.

Taylor's boss, who was initially skeptical of his story, changed his mind when he also found evidence of unknown machinery at the site at which the encounter had taken place.

Although no explanation was ever forthcoming, Taylor himself always believed that the entities he encountered that day did not have malicious intent.

"I do not think they were out to do me any harm, but I was very frightened," he said. "I am a countryman and I have never seen anything like this before."

Sadly, he sadly passed away in 2007 having never found out the truth of what had happened to him.

Next story >>
'Planet killer' asteroids - could we one day miss one that's heading our way ?
Recent comments on this story

#2 Posted by astrobeing 21 days ago

Wow, evidence! Whatever happened to this undeniable physical evidence that the alien visitors left behind?

#3 Posted by jethrofloyd 21 days ago

I remember also once reading that how this case was actually rationally explained. I don't remember a details, but the explanation was something like this: The "flying dome" Bob Taylor saw was actually a small oval tank that was used, among for other things, for the meteorological tests. The two round metalic balls that allegedly approached Taylor and "ivestigated" him were part of the metrological setup he was accidentaly running on. Everything else was mostly attributed to his fancy and a certain fear that overcame him when he approached that meterological facility. I remember also he said i... [More]

#5 Posted by jethrofloyd 21 days ago

I believe this article is based on the explanation I am writing about: https://www.dailyrecord.co.uk/news/scottish-news/ufo-investigator-claims-answer-one-2837456 Bob Taylor simply saw tthe dome-shaped water tower near Livingston. Everything else is just his imagination.

#6 Posted by astrobeing 20 days ago

I thought police are trained to investigate crimes, not UFO sightings.

It was a crime he was attacked

#8 Posted by astrobeing 19 days ago

No, he claimed he had been attacked. Which doesn't mean they had the skills to properly investigate a UFO sighting, especially one that had all the qualities of a hoax.

#9 Posted by jethrofloyd 19 days ago

Those two orbs which supposedly came out of the spaceship and attacked him could have been the two so-called ball lightnings.

That would definitely make you ship your pants