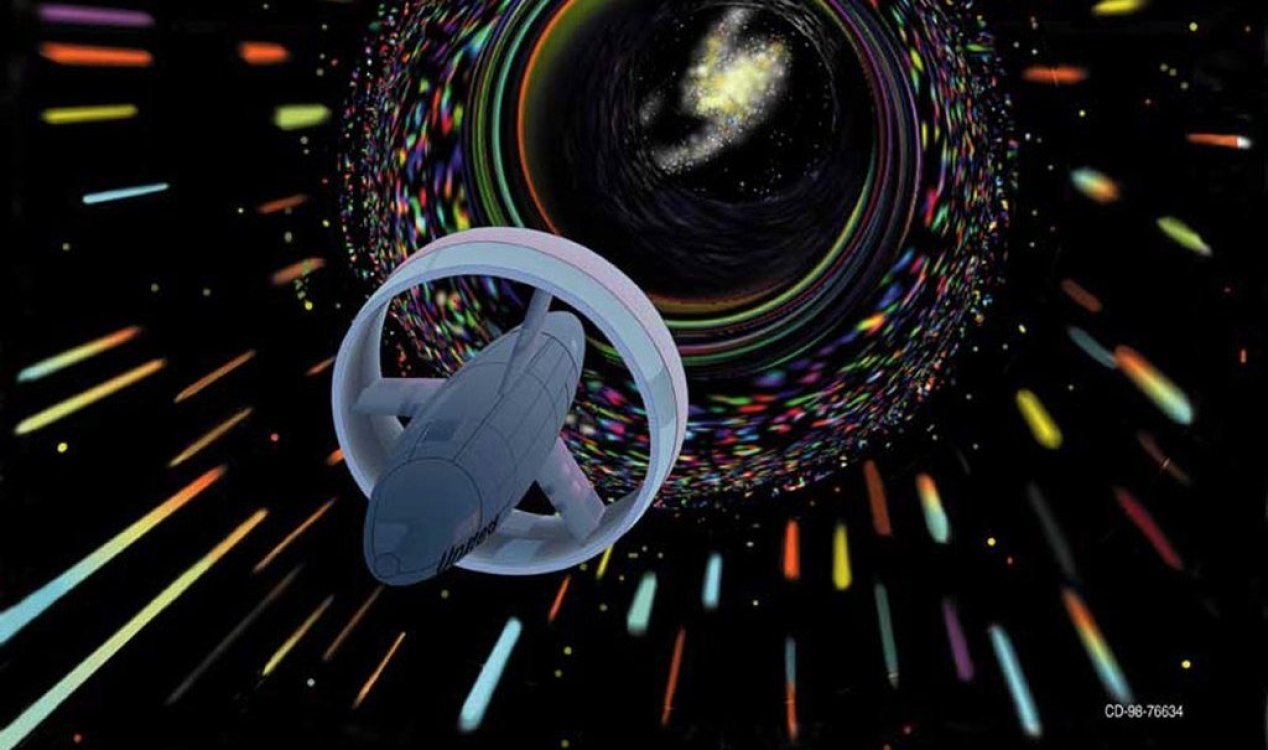 One day, it may be possible to do this for real. Image Credit: NASA
Using quantum computers, the researchers simulated a working 'baby' wormhole without rupturing space and time.
On the face of it, a wormhole might seem like a straight forward concept - link two black holes in different parts of the cosmos to create a tunnel through which a space traveler could pass.

In reality however, it's not quite that simple.

It's certainly an idea that has been around for a while - physicists Albert Einstein and Nathan Rosen took a very serious look at the concept in connection with Einstein's general theory of relativity, theorizing the existence of what is known as an "Einstein-Rosen bridge."

In recent years however, physicists have cast serious doubt on the possibility that such a structure could ever remain stable long enough for someone to actually travel through it. Now though, scientists have revealed that they have been able to simulate two minuscule black holes in a quantum computer and create a stable wormhole between them.

What's more, they were even able to transmit a message through it.

Of course it's important to emphasize that this is a quantum simulation of a wormhole and not an actual physical wormhole, but even so, it demonstrates that creating one for real might actually be possible in the (distant) future.

"So that's what we can say at this point - that we have something that in terms of the properties we look at, it looks like a wormhole."

Magnetic wormhole created in a laboratory
8-22-2015

#1 Posted by DieChecker 2 months ago

Read, read, read... Well, it's only mildly interesting. It was a simulation. I didn't see a link to the study, but even if I read it, I am supposing they didn't put in the full deals of how they "created" two tiny stable, unmoving, black holes. And then magically linked them together. Then sent a message through the linking "tunnel". We may just as well accept that The Enterprise is going to pop out of warp and bring us to a far off planet. I thought I had read that Quantum Computers were not stable enough yet to do anything like simulations.

Interesting that we understand more and more how our universe is working so we can create more and more accurate simulations. Wonder if we can simulate a whole universe eventually. Maybe our laws of physics make it impossible, maybe we wouldn't be able to have enough storage space etc even if we utilize everything that is available. Maybe we are living in a simulation too but maybe the host universe has other laws of physics that make it possible to do such a simulation. Fascinating.

#3 Posted by OverSword 2 months ago

Brings to mind certain people here that question whether we would simulate universes if we could.  Yes, obviously we would/will.

Oh. I thought they'd done this about a decade ago.  Is this supposed to be new?

#5 Posted by DieChecker 2 months ago

I suspect we'll never be able to simulate a universe. Because you'd need to simulate, and keep track of changes in, the trillions of galaxies, each with hundreds of billions of stars. And the planets around each star, and the individual elemental particles of each planet.... Smaller planets are roughly 10^10 atoms. So, given all that to simulate a universe using regular computing, it would need to track 10^34 to 10^35 individual particles (not including the stars themselves) (and not including photons). Conservative estimates online are 10^80 particles if you include all the stars, planets and... [More]

#6 Posted by MyOtherAccount 2 months ago

#7 Posted by MyOtherAccount 2 months ago

#8 Posted by jowasmus 2 months ago

Okay, bear with me here. I have accomplished the same, but in real life. I kid you not. Using my less than Devine knowledge, I temporarily opened a worm hole without destroying anything. Wirelessly, the keyboard I'm using typed these letters on my screen. I am about to hit "Submit Reply." The message will be shot from my computer to this post.    BOOM!

#9 Posted by Abramelin 2 months ago

That must be thé understatement of this year.