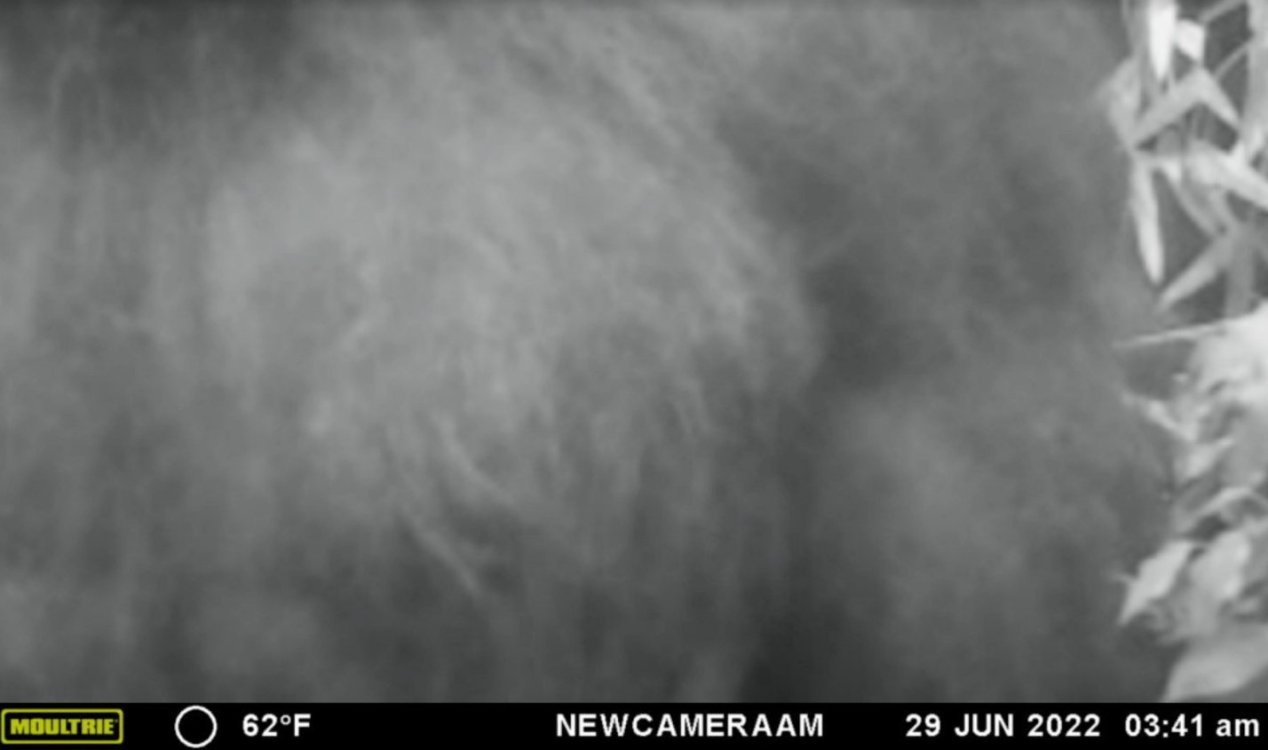 This image is definitely not what it seems. Image Credit: Ronnie / RMSO
An image allegedly captured of a Bigfoot-like creature in England has turned out to be a deliberate forgery.
Earlier this month, an individual identifying himself as 'Ronnie' wrote to the Rocky Mountain Sasquatch Organization to submit a photograph that he claimed to have taken in Cannock Chase.

The image (above), which is in black and white, shows a close-up of what looks like the hair-covered musculature of a large ape-like creature.

"Back in August of 2015 I saw a Sasquatch/Bigfoot type creature in broad daylight in Cannock Chase," he wrote. " It was roughly about 50 meters away from me, it looked to be about 7 or 8 feet tall (possibly even taller), very, very heavily built, and covered from head to toe in brown hair/fur."

"Over the last 7 years I've been back to Cannock Chase many, many times looking for evidence, hoping that I might see it again, I also started setting trail cams several years ago."

"I was setting trail cams most of last year, I stop in the winter as I hate the cold, and I usually start again in the spring. Last summer I was in Cannock Chase checking my trail cams, 3 showed nothing, but on one I found something very interesting and very extraordinary.""I see a huge chest and a huge left arm covered in hair/fur, which is actually partially obscured by foliage (in reality I believe the arm is much, much bigger)."

Not everyone was convinced by the image, however, especially Cliff Barackman of Finding Bigfoot fame who noted on Twitter that the photograph looked a lot like the replica model Bigfoot found at the North American Bigfoot Center (of which he happens to be the curator.)

By taking a close-up photograph of the model and changing it to black and white, he was able to reproduce almost exactly the image submitted to the RMSO.

This is one Bigfoot image, it seems, that has been well and truly debunked.

It seems the trail camera photo is almost certainly a cropped photo of the @NABigfootCenter's sasquatch replica, Murphy. I created the below photo by taking an older pic of Murphy, mirroring it on the vertical axis, and making it b/w. Note foliage and curly hairs on chest.. pic.twitter.com/qMs7DWjz9H

Next story >>
Like Prince Harry, a quarter of Brits have consulted a psychic
Recent comments on this story

You are very much mistaken. I have never borrowed your photos, I've haven't even heard of this guy, and I would never sell any pics to a paranormal or news publication for an excessive amount of money.

Do you mean she still believed in BF or denouced her evidence wasnt BF? I fully respected richard greenwell a believer but each year that passed with no proof his belief % dropped, carter was a loon, you ever read that crazy story where there were pounds and pounds of poo in her barn attic and it was a mix of creatures, who knows how it got there. And the hair she claimed she pulled from fox the bigfoot, its DNA tests.

Is this the person who claimed to feed footie-foo-foo blueberry bagels?

My only claim to fame here is that I live down the road and around the hill from the North American Bigfoot Center.  The closest I have been to a bigfoot are the 8 footers my brother-in-law the chain saw carver makes.  He gets about the same price for an 8' bigfoot or an 8' bear  and sells more bears.  The bears are reasonably life like.  I can't really say about the bigfoots or bigfeet (?).

Mary denounced Carter as a loon and fake, but she believed in Bigfoot up until the end. I miss Mary. I called her up until she became really sick.

I love that type stuff.

There is a BFRO center, which was a former hunting club right on the edge of my family's forest. But they are a bunch of decent guys who are members of the Nature Conservatory and I don't have to worry about them trespassing without permission, stomping around with guns or making a mess.

How can anybody believe that Bigfoot exists? And in Cannock Chase!!!! This isn't about finding ONE bigfoot. For bigfoot to exist you would need a population of them. a viable population. And if such a thing exists, then the traces of it would be obvious no matter how reclusive that population might be. Over the decades some REAL trace of bigfoot would be found. He's like Macavity, the mystery cat .....  Macavity’s a Mystery Cat: he’s called the Hidden Paw— For he’s the master criminal who can defy the Law. He’s the bafflement of Scotland Yard, the Flying Squad’s despair: For when they reach th... [More]

Not going to lie folks....I thought this was going to be the picture that finally solved everything we ever wanted to know about this thing.